Roofs that reflect sunlight save electricity

Delhi is set to become more energy efficient. Chief Minister Sheila Dikshit has asked the Bureau of Energy Efficiency and municipal bodies to build cool roofs in new buildings, especially the government ones. She gave the directions in mid-September. Such roofs reflect sunlight and heat unlike the conventional dark ones that absorb heat (see ‘How cool roof mechanism works’).

“Cool roof at ITC Green Centre in Gurgaon reduces surface temperature by 30°C and saves energy of air conditioning in the top floor by 10 to 15 per cent,” says Niranjan Khatri, general manager, environment unit at the company. According to a study by Lawrence Berkeley National Laboratory (LBNL) in the US and International Institute of Information Technology in Hyderabad (IIIT-H), commercial buildings can annually save 13 to 14 kWh/m2 of energy by switching to cool roof. A commercial building with 150m2 roof area can save up to Rs 15,000 annually in the electricity bill.

Switching to cool roofs is no rocket science. “A white wash of a dark roof can cut indoor temperature by 5°C,” says Chitra Vishwanath, an architect in Bengaluru. The concept is not new. Almost all the houses in Jaisalmer have their rooftops painted white. Likewise, the common practice of lime coating and roof ponds are the ingenuous ways of reducing roof temperature.

Present day architects have many choices. They can either use cool roofing material during construction or retrofit the existing roofs with cool roof technologies. One can also opt for green roofs with vegetation cover, which do not reflect sunlight but have cooling benefits (see ‘The options’). 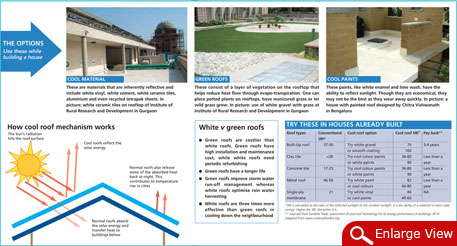 Delhi is the third city after Mumbai and Hyderabad to promote this concept. “Cool roofs can reduce the need for thermal insulation,” says Vishal Garg, assistant professor at IIIT-H. They also mitigate the heat released from roofs during night. It lowers air temperatures in cities that contributes to formation of harmful ozone gas. Besides reducing temperature, cool roofs last longer.

But one type of roof may not suit all cities. Vishwanath says climate decides the nature of application. For instance, reflective coating is suitable in the moderate climate of Bengaluru. In Delhi, reflective coatings in combination with earthen pots with broken bricks in lime mortar are better. A semi open space with a temporary roof can help in humid climates like that of Chennai.

Manu Gopalan, principal architect, Earthauz, an architecture firm based in Auroville, warns, “One should be cautious while choosing a cool roof. Most paints are toxic and do not last more than four years.

Instead, white bathroom tiles on roofs increase the reflective properties and minimise dust.”

Other experts point out that cool roofs are effective mostly in low-rise buildings where maximum heat gain is via roofs instead of walls.

But is the city ready to turn cool?

A M Athle, chief architect with New Delhi Municipal Corporation, is optimistic, “People took time to understand the gains of CFL. But it eventually happened as savings were difficult to ignore. Same will happen with cool roofs.”