Engulfed by the ravines

Once a throbbing rural business centre, Birahrua, in Morena district of Madhya Pradesh, is now haunted by devilish gullies

Engulfed by the ravines 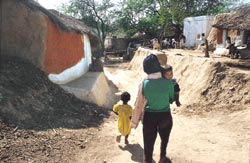 In Birahrua, Morena district, Madhya Pradesh, ravines are everywhere. They have swallowed up fields and are now ravaging hutments. Habitats are turning into devilish gullies. For Babulal Kewat, one resident of this village, this means another hunt for a refuge. Babulal and his family of eight are eternally on the run. Ravines haunt them wherever they go. They pine for peace and stability, but that keeps eluding them.

Ravines are the network of gullies and undulating terrain that are formed due to soil erosion caused by localised surface water runoff. The eroded soil is carried off to a nearby river. There are about 6.30 lakh hectares (ha) of gullied land in Madhya Pradesh; one third of this is in Morena.

" Bees sal pehle, sona barasta tha yahan (the village used to be showered with gold twenty years back)," says Babulal about Birahrua. It was then a thriving business centre which attracted people from surrounding villages. Goldsmiths, craftsmen and agriculturists used to crowd in everyday. No one paid any heed to the ravines looming over the horizon.

The river Kunwari then was the lifeline for Birahrua, a quiet, slim source of peace and bliss. But every year rains were draining away precious soil to the river, for the village had hardly any green patch to hold it back. Small gullies were coming up everywhere, a prelude to the oncoming ravines.

Swollen with silt, Kunwari could not take it any more. She overflowed, wiping away most huts and turning fields into wasteland. Ravines and gullies were now everywhere: in the fields, and at the doorstep of hutments. Birahrua was fragmented into twenty parts called "Bispura" where its 9,000 residents settled down. The new hutments in Malbasai, Arouli, Chitrouli, Daljeetpura, Ambah, Baitalpura, Panchsighpura, Baghkapura, Bhairopura and Marhi are at an elevation but they are still not safe.

Some 40 households in Birahrua could not afford to shift. Today, they have no land as their fields have turned into wasteland. Their cattle have perished because of lack of fodder. Everyday the men folk go to the towns nearby and slog for meagre wages.

"It is difficult to get brides for our sons. No father would send his daughter to a village where ravine has set its teeth," says Sheela Tomar, upsarpanch of Birahrua panchayat. "Even our daughters cannot get married because we cannot afford to meet dowry demands," he adds.

The panchayat is still named after the village but functions from Marhi, one of the twenty " puras", where the rich have shifted. They have taken away the village school, the gram sabha building and the health centre, leaving the villagers in Birahrua and other " puras " to fend for themselves. Now the ravines are stretching over into the " puras " as well.

Babulal lives now in Bhairopura and has already lost two bighas of his land to the ravines. He has three bighas more, but they cannot be cultivated as rainwater flows away without any scope for recharge of the groundwater. The soil is loosely compacted and thus is easily washed away. According to Devendra Kumar, who runs an organisation called Dharati to fight against such environmental hazards, the average soil loss is about 16.37 tonnes per ha in the region; in many areas, it goes up to 100 tonnes a ha per year.

Birahrua wears a grim look today; its emerald green patches are gone due to poor soil conditions. "The water in the only well here has gone deep down and the panchayat has not taken any initiative to rebuild it. We belong to the deprived sections, and the panchayat leaders want us to remain that way. Even drinking water is denied to us," says Sundar Kunwar, locally known as grandma. Kunwar has never left her post in the village; she does not want to let Birahrua get the name of " bechiragi " (without light) as the villages ravaged by ravines are popularly called.

Pushed to the wall, the villagers are trying to construct earthen and masonary checks under the gullied areas to check further devastation. They have planted vegetations called " kans " and " daw " on a bund. These stop land erosion and also offer raw material for cottage products like brooms, baskets and ropes that are sold in the market.

According to Ashok Valmiki, a resident of Baghkapura -- one of the several puras of Birahrua -- the villagers have levelled a part of their land swallowed by the ravines, dug small wells to irrigate the fields and constructed marginal bunds on the gullies to stop soil erosion. A new tradition called lasia has been initiated. Everyday villagers share the work on each other's field and have their morning and evening meals in the fields together.

But the gullies have been expanding nevertheless. A series of ravine reclamation and soil erosion control schemes launched from time to time by the central and state governments -- such as the Ravine Erosion Control Scheme, the various afforestation programmes and the Dacoit Prone Area Development Programme -- have not helped.

In fact some government schemes have further worsened the situation. Few years back, the government embarked upon an ambitious programme of aerial seeding for afforestation in lands affected by medium and deep ravines. The result was devastating. The babool species used most frequently for aerial seeding was foreign to the soil. In several areas they engulfed even agricultural and pasture lands and blocked paths leading to villages. Morena was one of the worst-affected areas.

Despite the efforts of grandma, Birahrua might soon become " bechiragi". The fate of the twenty hamlets of "Bispura" would also be the same. But the ravine dwellers would continue to live and struggle.

Krishna Jha is a freelance journalist