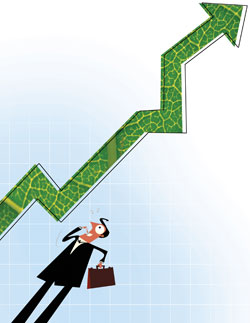 In the past three months, the green technology market has witnessed unusual activities. While nobody doubted the necessity of such a technology to curb carbon emissions, the drought of investment haunted all. But the recent public issue of green bonds points at a surge of interest in funding such initiatives. Experts monitoring climate-related investments, however, urge caution.

Like infrastructure bonds of the government, green bonds are fixed tenure and return bonds. But the money raised from these bonds is used to finance environment-friendly projects, especially climate-related ones. The World Bank issued the first green bonds in 2008 to raise funds for mitigating climate change. Since 2009 there has been a steady increase in the number of players in the market. In February, the Korean Export-Import Bank became the world’s first national bank and Asia’s first company to issue green bonds to raise $500 million. A week earlier, the International Finance Corporation (IFC), the World Bank’s lending arm for private bodies, decided to raise US $1 billion each year in green bonds to boost private sector investments in the renewable energy and other climate-friendly sectors. Since its inception in 2011, IFC has raised $2.2 billion, the largest climate-related bond issue till date.

Like the bonds issued by the Korean bank, IFC bonds were heavily over-subscribed. In May, the US state of Hawaii enacted a law to issue Green Infrastructure Bond to finance low-cost clean-energy projects for residential consumers and small consumers. “We have seen a consistent interest in green bonds since we developed the concept in 2007. The green bond is an ideal vehicle to align principles of responsible investments with achieving financial goals,” says Christopher Flensborg, head of sustainable products and product development at Skandinaviska Enskilda Banken, a Sweden-based bank. By 2020, says the International Energy Agency, $5 trillion worth of investment is needed in renewable power and energy efficiency to contain rising global temperature. The UN estimates that 80 per cent of the capital needed to address climate change will come from the private sector.

As per the Organisation for Economic Cooperation and Development, $70 trillion is available with various institutional investors. This is the market the green bond issuers are targeting. What has helped the popularity of green bonds is the failure of the carbon market in attracting investments. “Climate change is one of the most urgent development challenges of our time and only markets can mobilise the investment necessary for mitigation. We are ramping up our Green Bond programme to meet the growing demand for this asset class,” says IFC CEO Jin-Yong Cai.

Though there is no exact estimate of the green bond market, NGO Climate Bonds Initiative says between $10 and $30 billion bonds related to renewable energy projects have been issued in the past five years. Multilateral development banks, such as the World Bank, African Development Bank and European Investment Bank, have issued $7.2 billion bonds labelled green. However, the share of green bonds is meager compared to the overall bond market of $95 trillion.

Such bonds have their advantages. Besides funding green projects, they ensure investors get a fixed return even if a project fails.

However, in the past five years, some concerns have come to light. “We have seen examples of how the World Bank green bonds support clean development mechanism projects, which some NGOs object to due to the unfair system of carbon offsets,” says Michelle Chan, director of economic policy programme at US NGO Friends of the Earth. Emergence of the green bonds as a climate mitigation and adaptation mechanism is also being questioned. The fear is that such bonds will be counted as a part of developed countries’ official obligation to climate mitigation agreed under various international negotiations and frameworks. “Some civil society groups from developing countries believe climate finance should not contribute to developing countries’ debt burden and emphasise the need for climate finance to be grant-based,” says Chan. Though at present there is not much public debate over these concerns, the fast rise of the bonds will definitely spur it in the near future.