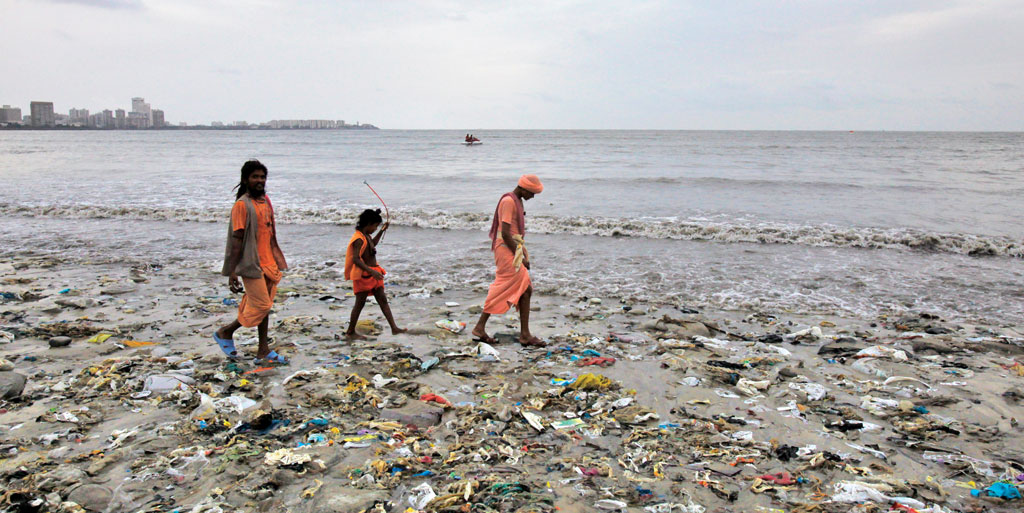 Imagine surviving without oxygen. That is what aquatic creatures in huge dead areas in oceans are going through the world over. Currently, there are more than 400 dead zones, or areas with extremely low levels of oxygen, appearing at least once a year (see ‘Suffocated spots’). They harm fisheries, destroy biodiversity of the regions they occur in and can damage major ecosystems of the world.

Such abnormal depletion in dissolved oxygen levels has intensified exponentially over the past 40 years. One such zone is present off the west coast of India, in the Arabian Sea. Here, the colour of the water becomes bright green every winter. The colour is so intense that it can be seen from space. The cause is a microscopic plankton, Noctilucascintillan, that “blooms” and spreads over the sea surface.

Recent studies have shown how marine communities are affected by depleting oxygen levels. A study published in PNAS in April 2015, showed that a dip in oxygen levels drastically changed the structure of the community of seafloor organisms, replacing the original biodiversity with fewer, hardier species.These changes occurred over a relatively short period (about 150 years), but the recovery from this collapse took more than 1,000 years.

Industrial scale use of fertilisers is one of the main reasons behind the formation of dead zones. Influx of nutrients from the land results in massive increase of photosynthesising plankton in water. As these plankton die, the bacteria responsible for decomposing the dead algae increase and consume the oxygen dissolved in the water to such a level that it cannot support life. Animals leave the area and the ones that are too slow to move suffocate and die.

Untreated organic sewage and the burning of fossil fuels also add to the problem. These pollutants enter the sea as run-off or from the atmosphere.

The dead zones or Oxygen Minimum Zones (OMZ) in the Arabian Sea have been growing in size. It is the thickest and the most intense OMZ among the world’s oceans and covers an area of around two million sq km. Excessive sewage from areas of high population density, like Mumbai and Karachi, are behind the coastal water oxygen deficiency, says a 2014 paper published in Nature. An OMZ in the Arabian Sea was first noticed in 1933-34. “The National Institute of Oceanography (NIO) started making regular observations only in the mid-1990s and our interest has largely been on biogeochemistry, especially nitrogen cycling and greenhouse gas fluxes,” says WajihNaqvi of NIO.

The open ocean OMZ in the Arabian Sea has been relatively stable but the coastal low oxygen zones seem to have intensified over the past four decades. Sulphidic conditions that occur every year now (during September-October) were not reported earlier. The most likely cause is the increasing fertiliser run-offs. A more scientific management of fertiliser use is needed, says Naqvi.

Another major dead zone occurs in the Gulf of Mexico. Almost every summer, fisherfolk at the Atlantic seaboard watershed in the southern US find dead fish floating in the waters of the Gulf of Mexico, and trawling for shrimp and other fish species at the sea bottom often proves futile. 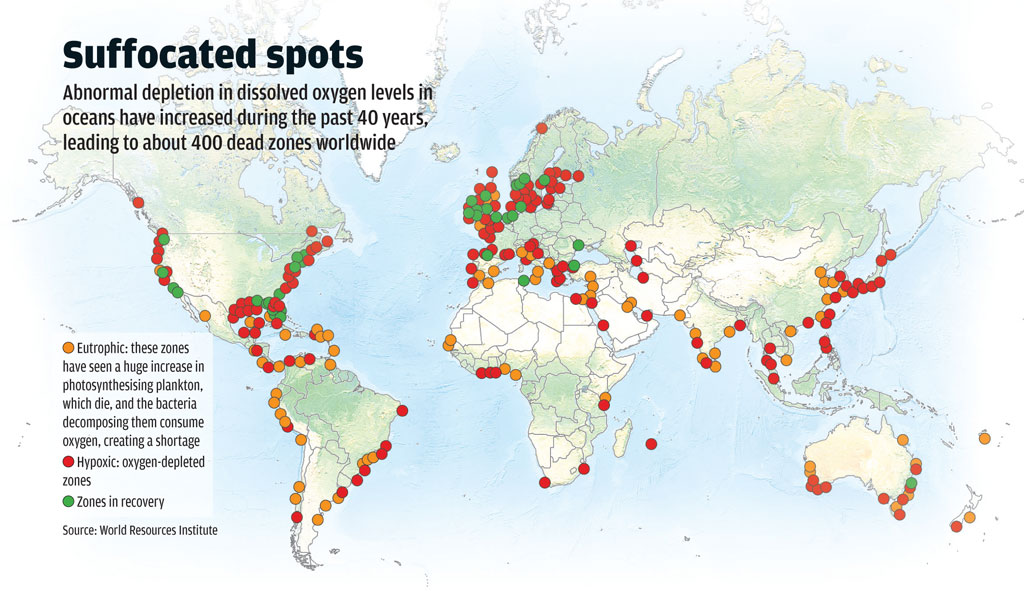 The Gulf of Mexico dead zone is the second largest in the world. A consortium of universities regularly surveys this hypoxic, or oxygen-depleted zone, to monitor oxygen levels. On June 17, the National Oceanic and Atmospheric Administration (NOAA), a US government agency, forecasted that its surface size is over 14,200 sq km or approximately 10 times the size of New Delhi. An action plan drafted by a special task force in 2008 aimed to reduce the size to one-third of its current average. While the official estimate for this year is expected to be announced in early August, researchers have found the size to be more or less consistent over the past few years. This is probably an indication that efforts to reduce fertiliser and nutrient inputs have either failed or are yet to yield results.

There has been one case, however, where efforts to check growth of dead zone have been successful. The dead zone at Chesapeake Bay in the eastern US has witnessed a 10 per cent reduction of hypoxia this year. The Chesapeake Bay Program, a partnership of federal and state agencies of the US, non-profits and academic institutions, annually measures dissolved oxygen in the area and predicts the size of the dead zone.

Elsewhere, researchers are attempting to understand the progression of hypoxic zones through time and space. This is done by tracking the patterns of dissolved oxygen concentrations in the ocean by collecting water samples and analysing them in a laboratory. Scientists at the Oregon State University, US, have pioneered a monitoring mechanism that reduces much of this effort while enhancing the quality of the data. A fleet of automated underwater Sea Gliders monitor the west coast of the US, an area prone to dead zone formation, collecting data in real time. “This helps us keep our fingers on the pulse of the Oregon coastal ocean ecosystem,” says Jack Barth of the College of Earth, Ocean and Atmospheric Sciences, Oregon State University (see interview).

The US Geological Society used a different approach to study the Chesapeake dead zones. In partnership with institutes in Maryland and Virginia, the researchers tracked the nutrient input into the streams and rivers of the Chesapeake Bay. A network of real time stream gauges, nutrient sensors and water quality data was used to predict the size of the dead zone by computer modelling.

Formation and intensity of dead zones is also dependent on other factors, such as wind speed, direction, and precipitation. Cyclones and hurricanes help oxygenate water masses, resulting in smaller dead zones. In North Carolina, US, environmental engineer Dan Obenour has developed a model that accounts for average wind speed over the hypoxia-prone regions of the Gulf of Mexico. For the first time this year, NOAA is incorporating multiple models on nutrient, weather and oceanographic data to predict the size of the dead zone in the Gulf of Mexico. However, monitoring efforts so far may be insufficient. Factors like ocean acidification, sea-level rise and changes in weather patterns will aggravate the hypoxia epidemic “by acting synergistically with one another and with recognised anthropogenic triggers including eutrophication. Each of these factors has the potential to act through multiple pathways on both oxygen availability, and ecological responses to hypoxia,” says a study published in Global Change Biology in November last year. “This suggests that a multidisciplinary, integrated approach that considers the full range of climate variables is needed to track and potentially reverse the spread of dead zones,” it says.

Possible methods to reverse this trend include terrace-farming and maintaining vegetation on river banks so that they act as nutrient sinks. Fertiliser inputs into streams and rivers can be reduced by retaining nutrients in the cropland, say experts.