Don't blame your genes. Environment and lifestyle cause cancer 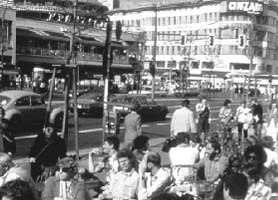 no matter how much scientists learn about genes, cancer will continue to snatch away the lives of your near and dear ones. Because it has more to do with the state of your environment than your genetic makeup.

That's what a study published this fortnight on cancer says, contradicting what geneticists have long espoused: that cancer's roots lie in genes. The findings are startling. Environmental factors cause about twice as many cancers as hereditary factors. The study, which has been conducted by the Karolinska Institute in Stockholm, may also come as a respite to those who have a family history of cancer and fear that they, too, would fall victim to it. According to the study, the risk of developing breast cancer, for example, is less than nine per cent if your sister has it.

For an identical twin sister, the risk is only 13 per cent. "In the current climate, there is this sense of fatalism on the part of the public with respect to genes," says Robert Hoover of the National Cancer Institute, Rockville near Washington, usa . This fear, he says, is unfounded.

The study is, in fact, a slap in the face of the Indian medical establishment, which has for long ignored the link between cancer and a bad environment. And at a time when there is so much hype about the Human Genome Project, the study should force researchers and research institutions, not only in India, but worldwide to shift the focus of cancer research from genes to environment. "The singlemost important lesson to be learnt from this study is that there is no truth to genetic determinism, the baleful philosophy that we are only what our genes make us," says Vidyanand Nanjundiah of the developmental biology and genetics laboratory at the Indian Institute of Science, Bangalore.

Paul Lichtenstein, an epidemiologist at the Karolinska Institute in Stockholm, and his team, used the gold standard for such nature-nurture studies: twins. Analysing the medical histories of 89,576 identical and fraternal twins (nonidentical) from Sweden, Denmark and Finland, they compared the incidence of 28 different kinds of cancer. Identical twins have the same genes, while fraternal twins, on an average, are just 50 per cent identical in terms of their genetic makeup -- the same level as among most siblings and between parents and their offspring. The researchers used a simple method: for every individual who had cancer, the team checked whether his or her twin ever had the same kind of cancer. The difference between the identical and fraternal twins gave a measure of the extent to which genes were responsible for each kind of cancer.

The team found that the effects of nurture far outweighed those of nature. Genes account for 42 per cent of the risk of prostate cancer; 35 per cent for colorectal cancer and 27 per cent in breast cancer. The heritability of leukaemia and of cancers of the stomach, lung, pancreas, ovary and bladder is even lower (see graph: What's deadlier? ). For many cancers, it is the environment which is the main causal factor. 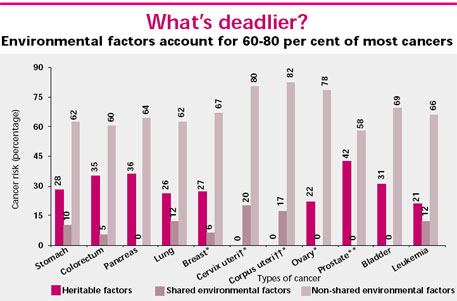 The study, which has been published in the New England Journal of Medicine (Vol 343, No 2), has several advantages over previous studies of cancer in twins. It is population-based, the outcomes are derived from complete data on incidence, and the size of the population studied is four times as great as in any previous effort. The study is significant as it determines the exact contribution of the genes and environment in the development of cancer.

All heritable cancers are only 20-30 per cent of the total incidence. But even this, heritable portion is dependent on the environment as was observed by the differences between the incidence of cancer in the different populations. The study states that human papillomavirus (a simple skin tumour) infections are responsible for a large incidence of cervical cancer; smoking (both active and passive) for lung cancer; and Helicobacter pylori infections for stomach cancers and are generally the result of environmental exposure. But the susceptibility is shared by all individuals of the family.

Earlier studies have revealed that people from rural Asia, where the rate of breast and colon cancers are low, become more susceptible to these diseases when they move to the us. Similarly, when people from Japan -- where stomach cancer is common -- move to the us, they are less likely to get the disease. A recent article in usa Today states that lung cancer rates have dropped by 2.2 per cent since 1992 in the us . This decline has been attributed to people quitting smoking. However, the role of environment and lifestyle, until recently, was presumed by many experts to be not very significant. Moreover, recent advances in molecular biology, combined with the breakthrough in the Human Genome Project, undermined the cancer-causing role of a polluted environment, further emphasising the role of genes.

But the Stockholm study once again brings into focus the role of the environment for its causal role in many cancers. "Environmental factors are more important than genetic factors, especially since everyone thinks that everything is solved, now that we have the human genome," said Lichtenstein.

But many geneticists do not agree with Lichtenstein. They feel that many cancer-susceptibility genes are yet to be found, and each probably contributes a small amount of risk to an individual. Therefore, they might be difficult to discover. Some critics feel that the study has many weak points. For example, the cancer risk from genes have huge variations -- colorectal cancer ranges from 10-48 per cent and breast cancer from 4-41 per cent. "That's a fairly large range," says Hoover. The study seems to assume that there is no correlation between genes and environment in determining the risk of cancer. The genetic component in cancer is undoubtedly modified by the environment and may be overestimated. For example, if you carry a gene that gives you stomach cancer only if you eat a lot of red meat, then the genetic contribution falls to zero if you stop consuming red meat.

But just what are these environmental factors? The study does not identify what exactly in the environment puts people at risk. But researchers suggest that pesticides, tobacco, air pollution, radiation, pollutants like dioxins and poor diet are the possible reasons. In fact, the study only corroborates what earlier studies have suggested: unhealthy lifestyles and chemical pollutants lead to cancer.

pesticides
Research suggests that pesticides like ddt ( dichlorodiphenyl trichloroethane), heptachlor and atrazine and other polycyclic aromatic hydrocarbons possess the ability to mimic oestrogen, a female hormone which controls the sexual development of female characteristics. "The exposure to high levels of oestrogen over a long period can lead to breast cancer," says V Kochupillai, head of medical oncology at the All India Institute of Medical Sciences ( aiims ), New Delhi.

People can be exposed to pesticides in three ways:
• measures to control disease-spreading insects;

• residues in the environment; and,

• through residues in food.

Roughly 85-90 per cent of pesticides used in agriculture do not reach target organisms but disperse through the air, soil and water. (see 'Facing a silent spring', Down To Earth , Vol 5, No 13; November 30, 1996).

tobacco
Smoking accounts for more than 85 per cent of all deaths due to lung cancer. For those who smoke one packet a day, the chances of developing cancer are about 10 times higher than for non-smokers. In India, tobacco-related cancers account for about half of all cases among men and one-fourth among women. Oral cancers account for one-third of the total number of cases with 90 per cent of patients being tobacco chewers.

unhealthy lifestyles
Choice of food may also affect your chances of developing cancer. Evidence points to a link between high fat diet and cancers of the breast, colon, uterus and prostate. Large amounts of alcohol increases the risk of cancer of the mouth, throat, oesophagus and larynx. Ultraviolet radiation from the sun and from other sources can cause skin cancer. Patients using radiation for the treatment of some types of cancer can increase the risk of a second cancer.

dioxins
Dioxin (environmental oestrogen) is suspected to cause cancer, reproductive problems and deformities. They have played a major role in making cancer the leading cause of death in Japan in the last 17 years. In 1997, cancer was responsible for 275,340 deaths.

A study conducted by Mary Wolff, an epidemiologist at the Mount Sinai Medical Centre in New York, has revealed that chlorine-based compounds used in plastics, pesticides, and paper bleaching make a significant contribution to breast cancer. "But the cancer establishment remains myopically fixated on obsolete, blame-the-victim theories of breast cancer causation, ignoring growing evidence of the role of environmental contaminants," says Samuel Epstein, epidemiologist with the University of Illinois Medical Center. "The increase in breast cancer rates worldwide has occurred during the same period in which the global environment has become contaminated with industrial synthetic chemicals, including toxic and persistent organochlorines," states a report by Greenpeace entitled Breast Cancer and The Environment: The Chlorine Connection .

But where does this study take us? Devra Lee Davis, a cancer epidemiologist at the Carnegie Mellon University in Pittsburgh seems to have an answer: You can't choose your parents. What you can do is control your exposure in your environment."
Cover Story Cover Story US Smoking Medical Research Lifestyles Genetic Disorders Environmental Health Environment DTE cover story DTE cover story Cancer Cancer
Donate Now