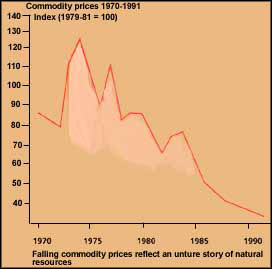 Besides, resource efficiency is usually profitable; it stops wasteful expenditure on resources that are being turned into pollutants, and then, on cleaning them up. Since it has the potential of being profitable, much of it can be implemented largely in the marketplace, driven by individual choice and business competition, rather than requiring governments to tell everyone how to live.

Finally, wasting resources is the other face of a distorted economy that splits society into those who have work and those who do not. Either way, human energy and talent are being tragically misspent. A major cause for this waste of people is the wrong thrust of technological progress. We are making ever fewer people more 'productive' while using up more resources, and effectively marginalizing a third of the world's workforce.


Efficiency is a concept as old as the human species. Human progress in all societies has been mostly defined by new ways to do more with less. Much of engineering and business is about using resources more productively. But most of the technological efforts of the last 150 years have been devoted to increasing labour productivity, even if that required a more generous use of natural resources.

__ In recent times, however, resource efficiency has been the subject of a conceptual and practical revolution. Ten years ago, the main news about how to do more with less had to do mainly with the speed of technological improvement. Since the oil crisis of the 1970s, electrical energy efficiency has doubled, thus (theoretically) enabling a 60 per cent reduction in costs. Similar progress continues today - less through new technologies than through better understanding of how to choose and combine the existing ones.

Progress in making resource efficiency bigger and cheaper is thus, positively dramatic. It is, superficially, somewhat comparable to the computer and consumer electronics revolution, where everything is continually becoming smaller, faster, better and cheaper.

But the fuel energy and materials resource experts typically do not think that way. The prejudice remains widespread that saving more energy will always cost more. The belief is that beyond the familiar zone of 'diminishing returns', there is a wall behind which further saving is prohibitively expensive. This was found to be true both for resource savings and for pollution control, and it fitted in nicely with economic theory.

Today, not only are there new technologies, but there are also new ways (theoretically available) of linking them together so that big savings can become cheaper than small savings. That is, greatly improved resource efficiency often costs less, yet works better than the older, less effective ways of conserving resources. When a series of linked efficiency technologies is implemented in concert, in the right sequence, manner and proportions, there is a new economic benefit from the whole that did not exist with the separate technologies.

So why are we all not efficient already? These ideas, though uncomplicated, are all sufficiently new to not have gained enough popular understanding yet. Even fewer people apply them. Practice is still held in the vice-like grip of convention.

Even with proper incentives, it is not easy to apply these new ideas about saving resources. Making big savings cheaper than small savings requires leapfrogging, not incrementalism. Advanced resource productivity requires integration, not reductionism; this bucks this century's trend toward narrow specialisation and disintegration.

These essentially cultural barriers to modern resource efficiency are just the tip of a very large iceberg of underlying problems. The idea of saving resources faces a daunting array of practical obstacles that actively prevent people and businesses from choosing the best buys first.

These include convention: often insurmountable costs of replacing conventional personnel with individuals who know better - this'human factor'may actually be the biggest obstacle and the biggest part of what economists usually call the 'transaction costs', the costs of overcoming inertia.

Other inertia or transaction costs relate to massive financial interest in preserving existing structures; customer ignorance about resource efficiency; discriminatory financial criteria; split incentives (such as landlords and tenants, or home and equipment builders and their buyers); greater ease and convenience of organising and financing one huge project than a million little ones; obsolete regulations that specifically discourage or outlaw efficiency; and the almost universal practice of regulating electric, gas, water and other utilities so they are rewarded for increasing the use and sometimes even penalised for increasing the efficiency of resources.

Despite the exciting opportunities offered by the efficiency revolution, we should be careful against the potential of efficieny to reinforce undesirable patterns; more efficient cars may allow for vastly expanding fleets. Saved water may permit further sprawl into deserts. Resource efficiency in general may support unmitigated population increase for an extending time span. The economic boost achieved from saving resources could thus erode the benefits of the whole exercise if not channeled into a different pattern of development that strengthens the substitution of people for physical resources.