Under the umbrella of eco-friendliness

Are the new ISRO 14000 environment standards industry's gift to a polluted globe, or merely the developed world's competition killing strategy

Under the umbrella of eco-friendliness 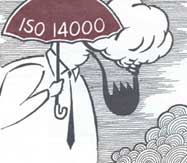 GREEN thinking which has enveloped organizations worldwide, has meant that environmental considerations are uppermost when starting new industrial ventures and in minimizing the ill-effects of their present activities, products and services on the environment. While this is easier said than done, it can be achieved through a commitment to an approach that not only addresses these concerns, but also calls for continual improvement in safeguarding the fragile ecosystem.

A step in this direction has been taken by Geneva-based International Organization for Standardization (ISO). Involved with the development and maintenance of standards for various activities and processes, the organization has created more than 9600 International Standards covering almost all technical fields. It is now coming out with a new series of standards devoted to environment management system (EMS) for industries. These have been named ISO 14000 series along the lines of its earlier ISO 9000 series which targeted product quality and customer satisfaction.

With its thrust on preventing large-scale environment degradation and maintaining the eco-balance, the EMS standards are intended to provide organizations with perspectives of an effective environmental management system which would enable them not only to achieve their environmental goals, but also their economic ones.

The EMS standards were an outcome of the ISO Strategic Advisory Group (SAGE) which was mainly established to investigate the need for international environmental management standards. It recommended the setting up of a Technical Committee TC207, which has 46 member countries and liaisons with 15 organizations such as European Chemical Industry Council, International Organisation of Consumer Unions, United Nations Environment Program International Chamber of Commerce and World Wide Fund for Nature. This committee has been entrusted with developing standards on auditing, labelling, life cycle analysis and performance evaluation.

In October 1994, the draft of the International Specification for Environmental Management System ISO 14001 was released to the member bodies for comment. (A draft International Standard becomes an International Standard Specification only after it is approved by a minimum of 75% of the member bodies casting a vote). The ISO 14001 draft addresses the auditable elements of an EMS for use in third-party audits and registration and includes guidance in the use of the specification. Combining the specification along with the guidance has been done to attract the widest possible accessibility and applicability to its standards. The final specification--ISO 14000--is expected to be ready by the year 1996.

The ISO formulated this series of standards to create a set of commonly accepted environmental management systems worldwide, which can foster international trade and also reduce the chance of environment-based trade restrictions.

Any process, service and the product has an impact on the environment. This could occur either in the last stage as in the case of plastic which is non-biodegradable, or at various stages of the product's life cycle.

The Environment Management System (EMS) looks into various aspects of mitigating the resultant ill-effects of a product or its life cycle on its surroundings. It also lists the practices, procedures, organizational structure and resources for implementing environmental principles. An effective EMS has a two-fold purpose--while it protects environmental interests, it also procures optimum economic benefits. An EMS model of a company should ideally consist of the five principles--an environmental policy, a plan to fulfil its environmental policy, capabilities to implement it, means of measuring, monitoring and evaluating its performance, and finally review and continually improve it. Countries such as the United Kingdom and Australia have already developed standards which are environment oriented. The British Standard, BS7750, is the most acceptable environment-based standard today and is applicable to organizations of all types and sizes. It is also independent of the legislative system of the country in which the company operates.

In India, a number of Environment Protection Acts have been enacted like the Water Act, 1974, Air Act, 1981 and several others. But according to A K Chaturvedi, Executive Officer with the Confederation of Indian Industries (CII): "Most industries are not even aware that a environmental legislation exists". The latest is the Environment Statement Notification, 1993 which concentrates on pollution prevention rather pollution cure. This induces companies into going for an environment audit. The CII pioneers environmental audits and reviews for many companies in India.

Most organizations abroad have undertaken environment audits and reviews to assess their performance. The audit involves a systematic, documented, periodic and objective evaluation of the companies' performance with respect to the environment. It helps in waste minimization, assesses risks, facilitates compliance with company policies, improves resource conservation and helps increase productivity. All in all, it is an extension of sustainable development. As Dr Surinder Kapur, Chairman and Managing Director of Sona Steering Systems Ltd. which has undergone an environmental audit puts it, the audit "helped in identifying the wastes and how to curtail them". The environmental audit is an important part of the EMS standard as devised in the ISO 140001 draft.

The ISO 14000 series of standards promises to be the most stringent form of checking pollution and will also be the most sought after. These standards could prod polluting units into taking note of the enormous damage their factories are perpetuating on the ecosystem and the means of reducing or doing away with it. An organization which has an effective EMS in place will be in an advantageous position in avoiding confrontations with the authorities over regulations both in its own country and in countries which import its goods. Just as industries which have bagged the ISO 9000 standards for quality have enhanced their image in the international market, the acquisition of ISO 14000 could also enable the industries to sell their wares under the umbrella of eco-friendliness.


While the positive aspect of these standards is an attempt to create an ambience which respects the environment, what will its impact be on the developing nations where environment-friendly technology is at a premium? Third World countries argue that developed countries have always used 'strategies' to distance themselves from having to compete with the developing countries. The ISO standards may seem to be another strategy of the 'cartel of developed nations'.

The standards could stymie the growth of industries in the developing world which have shown promise of being globally competitive. Asian countries after a long spell of playing a secondary role to the West, are fast emerging as an unignorable source for cost-effective 'quality'. These industries will now face bottlenecks like the absence of adequate technology to conform to the stringent ISO standards. In fact it might now take them more than half a decade at a conservative estimate to catch up with the developing nations in the critical sectors.

The ISO standards are predominantly derived from the prevailing work facilities and standards of the developed nations. What is often highlighted is that ISO helps the organisations produce a product or service of a minimum acceptable standard across continents. But the standard of quality which guides the creation of such standards is of the developed nations. And more often than not, these standards come into immediate effect, leaving the developing countries groping desperately for suitable solutions to meet them.

Though compliance with ISO 14000 standards is voluntary, developed nations are sure to enforce these guidelines to rule their trade with other countries. With countries primarily in the European market becoming more strict about their imports, India too needs to pull its act together to produce environment-friendly quality products. In fact, Dr Peter Heydemann, Director of Technology Services in the National Institute of Science and Technology (NIST) in Maryland, USA, has warned that "Indian industries will not have any customers in the US if they fail to meet the ISO 14000 standards set up for each product".

Since ISO 14000 will be a global standard, India will have to abide by it if it hopes to make a dent in various sectors in the international market. With a limited time-frame of a year before the series of standards acquire formal acceptance, the indigenous units should prepare themselves to improve standards and bring them to the internationally accepted level.