Even as Goa's politicians and the mining mafia employ multiple strategies to denotify two sensitive wildlife sanctuaries in the state's Western Ghats region, a new study reveals fresh evidence of tigers in the area 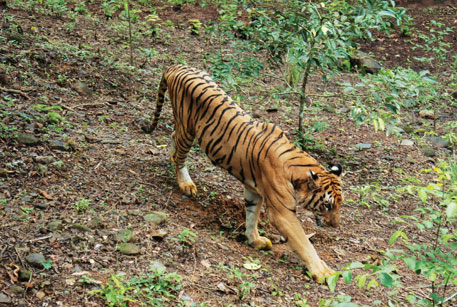 THE PRESENCE of five tigers in Goa’s Western Ghats region, as revealed in the findings of the Status of Tigers in India, released recently by the Union Ministry of Environment and Forests and Climate Change (MOEF&CC), has brought both elation and disquiet to its inhabitants. Environmental activists feel encouraged and have stepped up their campaign to have the area declared a reserve. Ironically, the Goa government, the mining mafia as well as local people have been pursuing multiple strategies to denotify not just the Mhadei Wildlife Sanctuary, but the neighbouring Netravali Wildlife Sanctuary as well.

Recently, five village panchayats opposed any move to designate the area as a tiger reserve. They tried to build and consecrate a temple deep in the forests of the Mhadei sanctuary. Businesspersons in other areas resurrected plans for a short-cut tarmac road through the forests that would shorten access to the neighbouring Belgaum, though foresters say this must follow certain stringent procedures that govern sanctuaries. Such conflicts are not new—just new strategies to extend and establish their hegemony.

The Mhadei Wildlife Sanctuary falls in Sattaritaluk, represented by long-time former Congress chief minister Pratapsingh Rane and now his son Vishwajit Rane, presently a member of the Legislative Assembly. Ahead of the 2012 Assembly polls, Vishwajit filed a petition before the Bombay High Court seeking scrapping of the notification. The case is pending.

Many believe that successive state governments have been dragging their feet on agreeing to a tiger reserve in Goa due to the powerful clout of the mining lobby. There are a large number of mines inside sanctuaries, and as many as 33 mines fall within the one km proposed buffer zone. The ruling politicians are attempting to dilute this. Goa officials say declaring a tiger reserve would be impossible given the compulsions of politicians in the state, no matter which party is in power.

In 2009, a then chief conservator of forests reportedly wrote to the chief secretary complaining that vast tracts of reserve forests in the wildlife sanctuaries were being converted into private property in collusion with revenue department officials. In one case in the Netravali sanctuary, a leading mining firm had, through a cashew plantation tenant, gained possession of 622 hectares (ha) of forestland that included the popular Savari waterfalls. The firm managed to get several orders passed in its favour and against the government, in collusion with minor officials in the land survey and revenue departments, until some forest officials pressed for a challenge that went up to the Supreme Court. 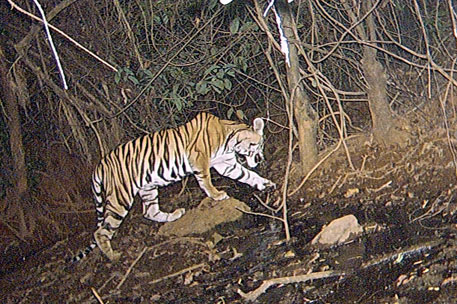 Forest officials, however, are eager to gather more substantial proof to justify a reserve. Surveys by the Wildlife Institute of India (WII) on tiger presence in the Goa region found evidence of three tigers in the Mhadei region in 1993. The WII study in 2014 found evidence of five tigers. After some prevarication, the state government appointed noted expert Ulhas Karanth in 2012 to conduct a detailed study in the area, using the more reliable camera trap method to track presence and identify individual animals from a database. The study is due in 2017.

According to environmental activist Rajendra Kerkar, who runs the Vivekananda Environment Awareness Brigade and was nominated by the BJP government in 2014 to the Standing Committee of the National Board for Wildlife, influential land encroachers fear they will lose out and have been instrumental in galvanising resistance and misinforming villagers about the reserve. For instance, they misinformed local people that they will not be able to celebrate festivals in a prospective reserve, though both the Scheduled Tribes and Other Traditional Forest Dwellers (Recognition of Forest Rights) Act, 2006, and the National Tiger Conservation Authority permit forest residents to enjoy such rights.

“Besides, if the area is declared a reserve, it will only strengthen Goa’s case in the interstate water dispute before the Water Tribunal against Karnataka’s Kalsa dam project that affects downstream water flow into the Mhadeiriver. The dam site is just 231 metres away from the Mhadei wildlife sanctuary,” says Kerkar. Goa has challenged Karnataka’s 2006 project to divert waters of the Mhadei at Kankumbi in Karnataka—through the five km-long Kalsa-Bhandura Irrigation Project and a canal into the Malaprabha river basin—arguing that it would dry up the Mhadei river that runs through the lush Western Ghats forests, before flowing into the sea as the Mandovi river. Goa has over 70 per cent of the Mhadei’s basin and the Mhadei Wildlife Sanctuary is dependent on the river.

Despite this, the Goa government has hardly been enthusiastic.

Forest officials say that despite the media obsession and aura surrounding a tiger reserve, getting the area notified even as a wildlife sanctuary was a major breakthrough. An upright and highly respected forester who is credited for notifying sanctuaries in the Andamans, Richard De Souza, a former principal conservator of forests, staked much to push through sanctions for two wildlife sanctuaries—Mhadei and Netravali—during a short period of President’s rule in the state in 1999. Signed by the then Lt Governor J F R Jacob, the move drew intense protests and legal challenges from the state government. It also led to the creation of a contiguous protected corridor running though the length of Goa (see ‘Ghats without borders’). 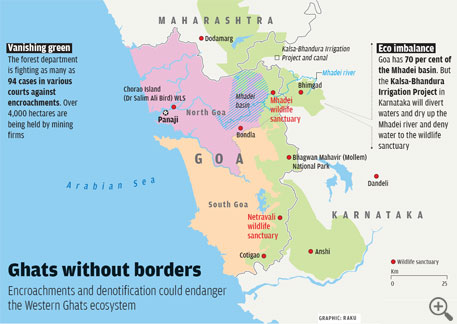 It is a huge protected corridor. Foresters have been struggling to maintain its integrity against encroachments, mining firms and vested interests, acting often in collusion with sections of the state administration. For one, the political establishment was singularly unamused to find two sanctuaries notified during their short absence from political power. The state government itself made several attempts to denotify the sanctuaries and/or reduce its area (see ‘Legal tangles’,).

While activists have taken a strident stand, Goa’s forest department is more circumspect. “One has to balance everybody’s needs—human needs, the need for development and the needs of the economy...,” says forest conservator D N F Carvalho.

Final notifications for large areas of the sanctuaries falling under Section 26 A of the Indian Wildlife (Protection) Act, 1972, have still not been passed, though the area comes under the control of the forest department. But foresters and environmental activists are hopeful that effective control under the Act, and the Supreme Court’s 2000 ruling that prevents denotification of any sanctuary area—either proposed under Section 18 or final under Section 26 A—will protect the sanctuary and its flora and fauna for the time being.

Alluding to Goa’s rich tiger lore—many temples and landmarks are dedicated to the tiger—Kerkar says, “The tiger is the main medium to protect the forest.” Claude Alvares of the Goa Foundation, whose petition in the Supreme Court halted mining in the Netravali sanctuary, says, “Anyone may try to mutate their property, in the hope that they will be able to wangle something somehow. But ultimately any dereservation of sanctuary area will have to go and be justified before the Supreme Court.” Clearly, the struggle to maintain the integrity of this green corridor that ensures Goa’s water security and houses some of the best natural forests in India is far from over.

The author is an independent journalist based in Goa