...and how it leads to environmental degradation 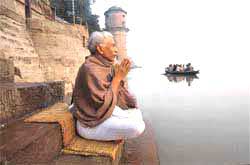 So, what is it that makes Hindus act against the philosophies of Hinduism? "Our minds have been polluted, so, how can the environment be in good shape? The values have suffered degradation," says Veer Bhadra Mishra. Although the fury of the flooded Ganga has not eroded the ghats of Varanasi, Mishra has seen widespread erosion of values at the same place.

Swami Srivatsa Goswami quotes an example from the Bhagwad Purana , wherein a disciple asks his teacher why Kalyuga (the fourth and final yuga , or era) is going to be so chaotic. The teacher replies that it will be because dharma will be the profession of those who have nothing to do with dharma.

Although people from different backgrounds cite different causes for the deplorable spiritual state of Hindus, there is unanimity on one count: the increasing commercialisation that is leading to degradation of values and ethics."All this is the gift of the so-called civilisation," says R R Pandey, professor of philosophy at the bhu. According to him, factors like globalisation have led to increased commercialisation of our traditions and rituals. People cannot see beyond money, he laments.

"The decline in values has led to increased greed and corruption. This, in turn, has made us forget our stewardship towards nature, leading to exploitation and degradation of the environment," says C M Jariwala, former registrar of the bhu . He attributes the sad state of religious and environmental affairs to the self-centred attitude that people have developed.

Pandey indicates that increased commercialisation is reflected during festivals in the spirit of keeping-up-with-the-Joneses. "It is sad to think that all these stupidities have become status symbols. People display their status by spending money on fireworks or the size and gaudiness of the idols," rues Pandey. In fact, there is an entire consumer base catering to the booming business of fireworks and other materials that are used during celebrations. Millions are spent on polluting the environment, Pandey points out.

"Earlier, when people used to bathe in the Ganga, they used to take a bath in their houses before taking a dip in the holy river. Now, every kind of filth goes into the Ganga," says Mishra. According to Goswami, the kumbh mela, one of the most auspicious occasions in the Hindu calendar, is actually a congregation where things are supposed to be discussed in terms of society and a better world. "However, it has reduced to a 12-year economic cycle, an occasion to make money and create filth," he laments.

What has led to commercialisation of values? "The traditions and scriptures have been misunderstood and misinterpreted. This can be the problem with a primarily ritualistic tradition. The rituals might remain, but the values might decline," says Jariwala. So, who is responsible for this? The government, as usual, or the religious leaders?


Authorities tend to ignore environmental issues linked with religion, fearing that they might hurt the religious sentiments. In the September 1998 incident in Vadodara, the officials and the authorities reportedly shied away from the problem because the issue had to do with religion. "The reason," Goswami notes, "is that the people who know nothing about dharma, who have nothing to do with it, are the ones who propagate it now." According to S C Gupta of phed , Bhopal, politicians prefer to let religious issues alone as religion is a means to garner votes during elections, even if this destroys the environment. Says Goswami, "It is not that the religious leaders do not have power. However, they use it for their own petty interests."

Several mahants of Varanasi say the government has not paid any attention to the religious leaders and teachers. "They have given so much for education in English and all the other fields. However, there is hardly anything that they have done for traditional education," complains a mahant. Goswami is not willing to take that: "The religious leaders are equally responsible. Our leaders and teachers have failed us. They are not doing what they are supposed to do. Instead, they are busy hogging money and power, using religion to meet their own ends," says he. Mishra is of the same opinion, saying that even religious leaders fail to understand the connection between religion and environment.

Pandey pegs the ignorance down to religious teachers keeping people in the dark about the scientific aspects of things: "They told us the dos and the don'ts. But they did not tell us the whys." Mishra is of the opinion that educational institutions were not institutionalised, preventing education from trickling down to the masses. "The Hindu clergy is also responsible for what is happening. Their approach towards religious ethics has also been commercialised," says Pandey.

How will Hinduism face up to the challenges of the changing world in the new millennium?