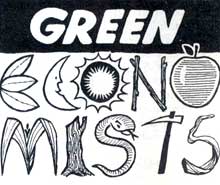 Environmental economists hold the brief that the best way to put environment on the agenda of various countries is to make them realise its economic value.

David Pearce, director of the LSE's London Environmental Economics Centre (LEEC), is a leading proponent of the role of economics in sustainable development. Another green economist from the centre, David Barbier, has conducted studies which show that the strategies for exploiting Brazilian and Indonesian forests have ignored the non-market value of forests. This has distorted the actual economic returns of these projects.

Robert Repetto from the World Resources Institute in Washington DC has researched the possibility of pricing natural resources. These prices considerably reduce the official growth rates of many developing countries.

Developing countries in particular have to realise the need to value their environment. In India, it is important that village commons be factored into its development plans. Equity and poverty are central to environment-friendly planning, as Kirit Parikh of the Indira Gandhi Institute of Development Research, Bombay, says.

Gopal Kadekodi and Kanchan Chopra of the Institute of Economic Growth, New Delhi, are two economists who have collaborated closely with non-government organisations, notably P R Mishra, and the work he has done in community land and watershed management, starting with the villages of Bhusadiya in Bihar and Sukhomajri in Haryana. The cost-benefit ratios show that these ecology-conscious projects generated wealth and incomes for both the local people and the government.