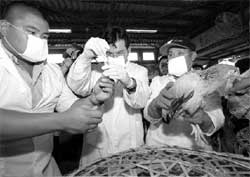 Our relationship with infectious pathogens is a part of our evolutionary drama. Simply put, microorganisms have a selfish interest in our survival. When humans develop resistance to the pathogen's virulence, the pathogen finds ways to evade this acquired immunity. This cat and mouse relationship is central to this drama.

Historically, the emergence of disease is possibly related closely to humans furrowing the Earth for cultivating crops and domesticating animals. With the dog came measles, the cow brought home tuberculosis and diphtheria after it grazed along with wild deer and antelopes, influenza hitch hiked upon horses, and anthrax popped out of the soil and infected humans and animals.

Diseases that emerge due to ecological changes and deforestation is possibly the most important among these. In tropical forests, deforestation releases vectors like mosquitoes and ticks, which compete for the limited resources that remain. Deforestation in forest fringes exposes land to sunlight and promotes the development of temporary pools of water, thus favouring the breeding of human-biting, fever-transmitting mosquitoes. Almost all biting insects carry or can potentially carry a pathogen. A clearance usually leads to establishments of forest villages of communities that migrate from other places.

Large mammals like pigs, antelopes, rodents and bats among others are reservoirs of food for vectors and a breeding ground for pathogens. When a few reservoirs are left, vectors explore new options which brings them in contact with the newly settled humans. The real challenge for an organism, if it has to establish as a new human disease, is to develop the ability to infect humans consistently and also develop a reliable means of transmission through a vector between the reservoir and a new host, humans. As in the case of ebola.

The ebola virus first emerged in two major disease outbreaks, which occurred almost simultaneously in Zaire and Sudan in 1976. Over 500 cases were reported, with mortality rates of 88 per cent in Zaire and 53 per cent in Sudan. Richard Preston in his acclaimed book The Hot Zone startled the world saying that the resurfacing of viruses like ebola was due to ecological degradation.

In cities, changes in the urban ecosystems are frequent. Clogged sewers, mounting heaps of garbage, hospital wastes and intermixing of migrant populations promote the movement of the pathogens and explore new vectors. But why are cities like Kolkata or Siliguri more prone to such unknown diseases than others? Apparently it's got to do with their geo-political positioning.

Let's take Siliguri. It is perhaps the fastest growing city in West Bengal, with some of its wards recording a growth of over 200 per cent since the last census. The migrants from neighbouring countries contribute to much of its growth. Incidentally, Siliguri also happens to be one of the most porous areas of the country sharing its borders with Nepal, Bhutan and Bangladesh. Experts say that in the absence of a monitoring mechanism, there is no check on what sort of diseases are being carried by these people coming from other places.

Does a changing environmental and ecological equation have any significant role to play in this development? Environmentalist Dhrubojyoti Ghosh believes that there is still insufficient data to indicate a clear cause-effect relationship between environment and unknown fever diseases. However, the role of degrading environment still cannot be entirely ruled out as it is common knowledge that vector-borne diseases thrive in such environs.


New infections emerge when an animal pathogen breaks the species barrier and infects human beings. Animal diseases that are capable of invading human cells (called zoonotic diseases), evade the host's immune system, establish and reproduce in these cells and produce fevers, inflammation, bleeding and disorders as a symptom in the host.

Mystery fevers are an indicator of the evolutionary success of microorganisms. Pathogens that cause unknown fevers are usually viruses, and exceptionally bacteria or other microbes. They remain undetected because they have an extremely short and rapid life cycle and it is difficult to isolate, culture and grow these viruses in laboratories. Viruses are lifeless organisation of a genetic material (rna or dna, never both) and a protein coat, and show signs of life only when they enter a host. They can develop extreme virulence from being benign organisms in a matter of a few (microbial) generations. Microorganisms, especially viruses, can mutate their heritable genetic material more quickly because they are relatively small in size. They can add genetic material from the host's genome and become extremely diverse in matter of a single generation. Their success as a group relies on the high rates at which genes are shuffled by recombination, producing virtually every perceivable permutation and combination of genetic arrangement.

However, only a few of these new variants may have a virulent form. Often associations with other organisms help. The cholera bacterium is more virulent to humans when infected by a particular virus.

On an average a virus has about 4,000 bases (the simple building blocks of genes), which means that a few million permutations in their genetic arrangements are possible. Viruses either have single and double stranded dna or rna; the rates of mutation vary vastly. Size of the genome and infectivity, numbers of hosts infected and number of generations produced too affect this greatly. Thankfully, not all mutations are possible -- some of these mutations are lethal for the virus itself.


The few pathogens that develop effective virulence may still not be able to invade another host because they may be too few or too "weak". This means that if a requisite inoculum size is not achieved then the host may overcome the infection and dash the virulent ambition of the pathogen. This phenomenon is called a transmission bottleneck, which can drive down the virulence of a pathogen.

Two distinct methods of transmission occur. In vertical transmission, infections are transmitted from mother to child or vertically across generation. In horizontal transmission, infections are transmitted to all susceptible hosts in the population like in the case of the common cold and infectious fevers. According to an interesting hypothesis by Paul Ewald of Amherst College, usa, virulence of pathogens is low in vertically transmitted diseases as they depend entirely on the survival of their host. Pathogens transmitted horizontally are more virulent and can even kill their hosts as long as they manage to move on to new victims (see table: Paths of a pathogen ).

According to Carl Bergstrom, professor of biology at Washington University, usa, transmission is a tight "bottleneck" for a number of diseases. He contends that similarly sized bottlenecks have greater genetic consequences on vertically transmitted pathogens than on horizontally transmitted pathogens. Together these transmission modes determine the evolutionary and virulent fate of the viruses.


Pathogens too don't have it all easy. Millions of bacteria compete among themselves in an endless turf battle, jostling for space in the human gut or sweat-laden folds of the skin. It makes perfect sense that they would evolve means to survive and fight off competitors and devise means to invade the human cell more rapidly, producing near perfect replicants, which burst out of the host cell to invade new cells in a new host. All this must be done before a more powerful pathogen arrives and stakes claim on a host cell.

But not all infections may be successful. Many unknown pathogens are widely present in the environment and are easily communicable to susceptible individuals in a population. But there are resistant individuals in the population who don't contract these infections, and their presence protects the rest. This paradoxical mechanism is called herd immunity and has been harnessed for attempts to control diseases. If you immunise say 90 per cent of the schoolchildren against measles, then the measles virus can no longer spread because there are too few susceptible children in the population. The immunised majority protects the un-immunised minority. But if you let your guard down for a moment, and the immunisation rate drops below 90 per cent, then the virus that has been hiding somewhere, reappears and there is a measles outbreak. The phenomenon may apply to naturally occurring immunity as well.


Most diseases have an ecological basis to their origin. Seasons and changing climate too assist the emergence of diseases. In poor states like Bihar and Orissa there is a distinct 'microbial traffic', a virtual succession of infectious microbes.

Even causalities have a pattern: due to water scarcity during summer, contaminated water leads to diarrhoea, which particularly affects children and older people. During the rainy season, malaria and fevers of unknown origins emerge, all age groups are affected but the effect on young women and pregnant women is more. If a natural calamity like flood or cyclone arrives, then malaria recurs, and cholera and other gastro-intestinal infections follow which affect young adolescents and children more than adults. In winter the paucity of food causes widespread hunger and leads to malnutrition, makes people more susceptible to infections, thereby providing an ideal environment for the spread of diseases. There are distinct patterns of succession of diseases with changing seasons.

In cities of north India, when the winters end abruptly, a spate of viral infections descends on the cities and the villages alike. There is little climate variability in the rest of the country except the coming of the monsoon. Winters are milder and summers like the rest of the country is hot. Forest and rural areas in India have their fair share of viral diseases. Kyasanur forest disease seen in Uttara Kannara and Shimoga districts of Karnataka is a tick borne fever that causes fever and body ache.

Threats from ecological changes in neighbouring countries leads to migration. For example, rural families from eastern Nepal migrate to the forests and the plains of upper Assam every year. With them they bring their livestock, especially buffaloes, each infected by a benign virus called the Karyovirus-II. When these families settle around the forest fringes, a chance encounter with a new vector increases the possiblities of its spread to humans. The fever causes severe haemorrhagic fever, bleeding and death.

Like the Karyovirus of Nepal, there are many fevers -- Crimean Congo Haemorrhagic fever in Pakistan and the numerous diarrhoeal diseases in Bangladesh -- waiting to nurture their virulent ambition in India.


What is more significant in disease ecology is not how mutated viruses and other pathogens become established in humans, but how ecological change contributes to its emergence. Causal factors -- changes in land use, human activities and urbanisation -- are integrated with ecological factors to cause mutation, changes in the pool of hosts and reservoirs and other elements. These in turn affect both human and animal hosts, as well as vectors.

Moreover, air, water or soil pollutants or other stresses affect humans and other species in the ecosystem. Polluted habitats are an ideal environment for these pathogens. Pollution reduces human immunity. And some pollutants can promote the growth and proliferation of some pathogens.