Naveed, along with his wife Khalida and their three daughters, wakes up every morning to extract gold and copper from circuit boards of dismantled computers (see: graphic). He can tell without difficulty which motherboard is from China, and which one from Japan. The Japanese circuit boards are better, he says, because they fetch him more copper and gold than the ones from China. As he burns the computer parts the plastic melts, emitting a red, toxic fume. The remains from the burnt heap—the metals—fetch him up to Rs 300 per day.

Living in a one-room house in Uttar Pradesh’s Moradabad town, Naveed has extracted metals for over 30 years now. Outside his house, in the Nawabpura colony, the locality is full of such one-room houses with dismantled parts of circuit boards strewn all over. Every family here specializes in one of the processes to extract metals from circuit boards. Some use gas torches to heat a board just enough to melt the solder, which separates the metal containing parts from the boards. Some acid-bathe parts, and some, like Naveed, burn the boards.

The circuit boards are sourced from computer monitors, cpus, keyboards, television and remote control sets, radios, cell phones and other electrical appliances that find their way into the township. Traders estimate about half the circuit boards used in appliances in India end up in Moradabad, also called peetal nagri —brass city.

The residents are immune to the smoke, the noise and the smell their work produces. Most of the township’s population extract metals on their own, or work with big traders, earning about Rs 100 per day.

Their processes are rudimentary—and risky (see: Informal v formal operators). Two motherboards, ususally weighing one kg, cost Rs 230. After selling the metals, they get a profit of 10 per cent. They ensure nothing gets wasted. “The poorest people in town even buy the dust that remains after burning the circuit boards to look for traces of copper,” said Salim, Naveed’s neighbour. 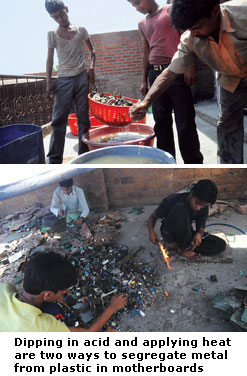 Salim, 24, entered the recycling e-waste business recently. His brother, among the biggest traders of circuit boards in Nawabpura, sources them from Seela-mpur, the e-waste hub on the north-eastern fringe of Delhi. The Seelampur market is also called the largest electro-nics dismantling market in the country, where over 50 per cent of used computers end up for sale and recycling.

The workers in Seelampur include teenagers such as Shanu, 15, whose hair shines golden in the sun because of copper extracts in it. He dismantles fans found in the cpus of computers. “Nobody likes going to schools here because we make more money than a government servant does. On good days we extract 10 kg of copper, at Rs 330 per kg,” he said. Separating brass and copper from plastic and rubber using a hammer fetches up to Rs 200 every day.

They are all called dismantlers, for their jobs involve getting computers, breaking them into its basic parts and selling motherboards to traders in Moradabad. The remaining metal and plastics do not reach there. These stay in Seelampur.

Seelampur gets e-waste from across northern India. All scrapped computers that are auctioned in the region wind up in Seelampur. Another source is kabadiwalas (waste pickers) who buy scrapped electronics from households. But almost half the computers are broken pieces from lots of imported secondhand computers.

Auction News, a bi-weekly journal in Delhi, publishes advertisements on scrap that offices or government departments want to auction. When recyclers gather in the offices concerned, auctions are held. In some cases, scrap is sold by inviting tenders.

But, with the government announcing in late April rules on e-waste to regulate the informal e-waste markets, the lives of Naveed, Salim and Shanu, and thousands of others engaged in the industry, might change (see box on p28).

Traders in Seelampur and Moradabad have heard about the announcement but don’t know what it means. They apprehend they might be out of business, but are not sure.

More than 90 per cent of the e-waste generated in the country lands up in the unorganized market, a mait-gtz report estimated. mait is an association of IT companies, and gtz works worldwide on sustainable development. City labourers find this work a lucrative opportunity to make money even with the hazards involved, the study said.

The government assumes it will be able to regulate the informal e-waste sector through its proposed rules on e-waste, which allow only registered com-panies with updated and safe techno-logies to recycle e-waste. Scrap dealers got to know of the rules at a recent auction by the Reserve Bank of India in Delhi to sell its old computers and printers. The bank rejected a recycler’s bid because he did not belong to the organized sector, the recycler said.

“Getting registered means having a large area and and technology. Only those with big investments can get registered,” said Daljeet Singh who attended the auction. He runs a recycling store in Mayapuri in Delhi. Most recyclers from the informal sector at the auction have studied till class viii, said Abdul Rasheed, another scrap dealer from Turkman Gate in Delhi. “Our livelihood depends on these auctions,” he said. Rasheed is a regular at such auctions and he sells electronic scrap to traders in Seelampur.

Organized recyclers, who formed e-waste recyclers’ association in July 2009, are cheering the new draft. One of their complaints is they are unable to make profits because of competition from the unorganized market. According to the association, about 10 per cent of the total share of the e-waste market is with organized recyclers. 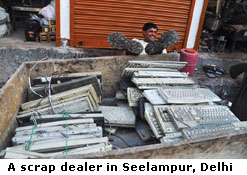 A 10,000 sq ft formal e-waste dismantling unit in Noida can process up to 500 tonnes of e-waste annually. Since June 2008, when it was launched, the unit has processed only 200 tonnes because of lack of collection mechanisms, said Raj Singh, Noida unit head of tic Group India Pvt Ltd.

Clients of the formal recyclers incl-ude multinational companies that do not want their products to enter the grey market and compete with their new products. “Business process outsour-cing companies want their machines processed by formal recyclers to keep up an environment-friendly image. A certificate to this effect is awarded,” said Singh. “We cannot match payments of the unorganized sector. Unlike them we scrap all that we get from the companies. Informal dealers refurbish and make money from say a computer, which is a substantial quantum of e-waste,” he added. Informal recyclers argued if any part is found in working condition, it is a resource and it makes sense to refurbish it. They usually sell any part of a computer that is functional and it fetches them more money than what they would get if they broke it into metal and sold it.

India generated 330,000 tonnes of e-waste in 2007, which is equivalent of 110 million laptops, said the report by mait-gtz. About 10 per cent of the e-waste generated every year is recycled; the remaining is refurbished. The only way to sustain formal business in the given situation, said the association’s members, is the licence to import. Only Attero has the licence to import. Applications from other formal agencies are pending with the environment ministry.

Importing e-waste makes financial sense for the exporter country. For instance, waste traders in Europe or usa, who would have to pay US $20 to recycle a computer safely in their countries, sell it at half the cost to informal traders in developing countries illegally.