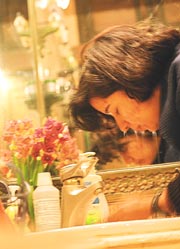 Verma says that EDC can hardly be sole parameter for infrastructure capability. "Even if Rs 740 crore EDC were to be sufficient to develop the entire peripheral infrastructure in Gurgaon, which seems unlikely, it could not buy or bring water, since there isn't any that the state can buy or bring. As partners in development, private colonisers can't first disregard an obvious development constraint with abandon and then expect the state to do the impossible by paying it some EDC." Quite right. In early 1980s, these colonisers had hundreds of private borewells and were drawing water free of cost. Today the water table has fallen down to 40 metres below the ground level.

WATER: DIG DEEPER
Gurgaon depends heavily on groundwater to meet its drinking water needs. According to the Central Ground Water Board, the present total water supply is 2,100 cubic metre per day, 70 per cent of this is met through groundwater. Two agencies supply drinking water -- the Public Health Engineering Department (PHED) and HUDA. But because they have failed to do so in many new colonies, private colonyfiers have ripped into the aquifers.

Shockingly, there's no data on how many borewells function here, or how much groundwater is being sucked out. HUDA officials also have no clue of the number of borewells operating in Gurgaon. They quote borewell numbers from anywhere between 80 and 120. But after speaking with RWAs, Down To Earth correspondents realised that DLF alone has 58 borewells, and Ansals about 50: 108 borewells alone are with just two private colonisers!


No wonder, then, the water table is falling at a rate of 1-1.2 metres annually, plummeting by 16 metres in the last 20 years, informs Bhatia. According to S K Gupta, executive engineer of HUDA, the groundwater table in Gurgaon has fallen from 12-15 m in 1986 to 35-40 m. According to Bhatia, once the water table goes down to 200 m, there will be no water left, only rocks. All indications are that the rate will become more alarming.

This isn't mere prediction. Shopping malls, too, are into heavy-duty extraction. The Sahara Mall of the Sahara India Group has two private borewells and extracts 100,000 litres of water per day. Authorities claim that the mall has a sewage treatment plant of capacity 30,000 litres per day, but refused to show it.

The alarming drop in Gurgaon's water table woke up the Central Ground Water Authority (CGWA), under the Union ministry for water resources. In December 2000, it issued directions under section 5 of the Environment (Protection) Act, 1986: "no person/organization/agency (govt or non-govt) shall undertake the operation of drilling, construction, installation of any structure and any scheme/project of ground water development & management in Gurgaon Town and its adjoining industrial area, without prior specific approval of the Authority." It also directed authorities to register all existing groundwater abstraction structures. Between 2.7.2001 to 31.10.2001, the authority had registered 8,500 such structures. According to Bhatia, at present, about 9,140 borewells are registered with CGWB, but this is just 50 per cent of the total numbers. He claims that there should be close to 18,000 borewells operating in Gurgaon district as of now.

Private colonisers hire contractors, who in turn hire wastepickers on an eight hours daily basis. These wastepickers collect door-to-door in a trolley. And, as the UNDP pre-feasibility report points, "the waste thus collected is disposed off in any open land or dumping yard outside the private developer area". V K Jain of sector-14, has felt the effect of indiscriminate dumping. "Some time back the state government said that it has found a site near old Faridabad to dump waste, but nothing has moved on that front. Leachate from all this open waste might be reaching the groundwater, polluting it." But private colonisers claim waste management should not be their responsibility. "It is government which should set up a municipality for new Gurgaon and run waste management. Why should private companies be penalised for it?" says Dalwani, clearly forgetting is that developers were also a part of the model when it was thought up. Why were these issues not looked into? Why did the colonisers build plush colonies without thinking of waste management?

COMMUNICATION: HEADING NOWHERE
The Gurgaon portion of the Mehrauli-Gurgaon road handles over 0.19 million passenger car units (PCUs) daily -- by conservative estimate -- as against the capacity of 40,000 PCUs. This was pointed out in the UNDP's feasibility report. The traffic load has had its effect. Points out that report: "with the spillage of Delhi's population, shifting of large corporate houses and industries and growth of private developers in recent years - Gurgaon has experienced a deteriorating air quality...".

Residents also complain about poor public transportation. "The transport system is unfriendly and crippling. People who do not have their own conveyance, have to depend on expensive options like taxis, or unsafe cycle rickshaws. Or are compelled to buy a car. An efficient transport system will reduce vehicular pollution, as people will rely on public transport," S K Khashu, a resident of South City I, Gurgaon.


Power supply, too, is a major hiccup. Every month, 15-20 commercial/industrial and 300 residential connections are released. The demand is rising at 15-20 per cent per month, but supply catches up at a snail's pace of 5-7 per cent per month. There are also high transmission and distribution losses -- 22.5 per cent. As expected, colonisers are blaming HUDA for not being able to provide adequate power supply. But HUDA claims that the problem is at the colonisers' end. " DLF laid down its transmission lines in 1980s, when the electricity load was as low as one kilo watt (kw). Then they sold these flats to rich people who use five air conditioners in one house. Obviously load has increased to 40 kw. How can a one kw line take load of 40 kw? We have told DLF to upgrade its transmission lines, but it is not doing so," informs a senior HUDA official.

Due to lack of power supply, both residential and commercial complexes are heavily dependent on diesel gensets. These gensets have now become a nuisance. "Malls are coming up just next to the residential colonies. These malls are open till midnight and use gensets for hours together. It has become impossible to breathe and sleep," complains a resident of Beverly Park II.