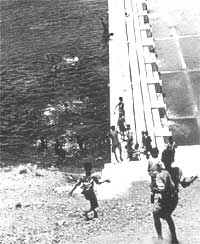 in their blind endeavour to espouse the cause of large dams, proponents -- even so-called experts like scientists, engineers and others -- often make biased statements unsupported by proof or data. The mere mention of 'small-scale water harvesting structures' (check dams and the like) has them up in arms. But they fail to comprehend that it is not possible to reach water to every village in the heart of Rajasthan or in the hills of Uttaranchal or the Northeast through large dams.

An environmental scientist from the School of Environmental Sciences in the Jawaharlal Nehru University, V Subramanium, said in an interview, that appeared in the Indian Express on December 10:

"... Small dams had preserved less water after rainfall in the state. The percentage of water accumulated, in comparison to the total capacity, was very less in small dams as compared to big ones... A small dam was filled to only about 20 per cent of its capacity while larger dams stored 60 to 75 per cent."

At the Centre for Science and Environment, we are part of a campaign called 'The People's Management of Water Programme' where we are promoting community-based water harvesting. My colleague met the scientist as we were keen to document experiences of communities involved in water management and scientific data indicating the efficiency of small structures and their drawbacks.

Subramanium claimed that he had visited three districts in Gujarat where he found that the check dams had failed. These districts were Rajkot and Bhuj. He had no scientific data to back his statements.

A study by the Dehra Dun-based Central Soil and Water Conservation Research Training Institute (cswcrti) also indicated that larger catchments resulted in lower runoffs. Even our reports based on visits to drought-affected regions in Rajasthan and Gujarat show villages that have harvested the rains have fared better than those who have not. Structures whether big or small, cannot continue to supply the 'normal' amount of water if rain fails for three consecutive years. But harvesting whatever little rain that falls will definitely alleviate conditions. Activists are often accused of being extremists, proposing unpractical and unscientific solutions. Well, we have got our science right. Its time the scientists did.