Sabarimala bursting at the seams with devotees but environmental concerns ignored 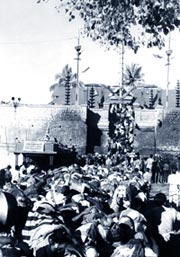 Legend has it that when Lord Ayyappa set out to seek solitude, he settled upon Sabarimala. Its sylvan surroundings and undulating terrain no doubt made it an ideal retreat. But if mythology and present-day reality were transposed, Sabarimala would no longer be the chosen abode of the hermit. Because now about 50 million devotees throng the forest temple for an annual pilgrimage, putting the fragile ecology of the region under severe stress. The problem is compounded by the authorities' perpetual lack of preparedness.

Located 467 metres above sea level, the Sabarimala temple is surrounded by 18 hills and situated in the Periyar Tiger Reserve in Kerala. With the pilgrimage getting underway on November 16, this year too hardly any lessons seem to have been learnt from the past. This despite the latest report of the state assembly's environmental sub-committee hinting at an impending environmental disaster.

The panel, headed by legislator George J Mathew, has made 32 proposals to protect Sabarimala. "But none of them are acceptable to the Travancore Devaswom Board (tdb), which administers the shrine. Its prime concern is grabbing forestland," alleges A V Thamarakshan who headed the previous committee. The tdb, district authorities and health officials have, in fact, shown scant regard even for the stipulations laid down by the Kerala State Pollution Control Board (kspcb). "The menace posed by pollutants...is a grave threat to the very sanctity of the hill shrine," warns the Mathew panel report.
The biggest victim is Pampa river, which gets choked by solid waste including human excreta, plastic bags and bottles, and coconut husks. Several million devotees also take a holy dip in the Pampa, the sole source of drinking water for nearly two million people.

According to a report compiled by the kspcb, the total coliform count recorded at the most polluted part of Pampa river is about 1,14,000 per 100 millilitres (ml) during the peak season. Just before the pilgrimage it is merely 380 per 100 ml -- well below the permissible limit of 500 per 100 ml.

The drastic rise in pollution during this period can be mainly attributed to slipshod arrangements made by the tdb and state administration. Though 2700 temporary toilets have been provided near the shrine, the capacity of the sewage treatment plant is limited, reveals district collector P S Enos, under whose jurisdiction Sabarimala falls. This leads to the overflow of human faeces from septic tanks into the river's tributary.

The state government is, meanwhile, pinning its hopes on the implementation of the Rs 278-crore Pampa River Action Plan. It is a part of the National River Conservation Programme under the Union ministry of environment and forests. An expert committee submitted its report on the project to the state government on December 11. Initially, it would focus on improving sanitation facilities between November and January when the river suffers the maximum pollution due to the pilgrimage.
The Periyar Tiger Reserve, particularly the Sabarimala area, is one of the 18 hot spots of India which are home to several endangered species. Ironically, the tdb has put forth a proposal to cut down these very forests to give a boost to the pilgrim tourist business. "Unless the stringent conservation laws are relaxed, the problems of Sabarimala cannot be solved," claims tdb president N Babu.

"The solution is to curb the crowds and not commercialise the event," opines K Anirudhan of the Sabarimala Samrakshana Samithi. Adding to the environmentalists' worry is a proposed rail link to Sabarimala. Clearly, the need of the hour is to ensure that the once-pristine forest isn't affected any further.

Thirty or 40 years ago, only around 50,000 pilgrims visited the temple. Today the number is 50 million and is rising at the rate of 20 per cent every year. This ever-swelling flow resulted in a major mishap on January 14, 1999, when 52 pilgrims died in a stampede at the site. Indications are that Sabarimala is a disaster waiting to happen...again.

With inputs from TV Jayan in Delhi