An inefficient industry is marring prospects of jute, paving way for plastics 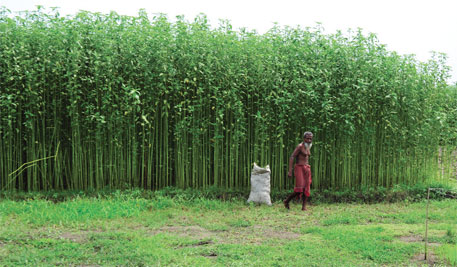 In April, Madhya Pradesh Chief Minister Shivraj Singh Chouhan threatened to sit on a hunger strike. The reason was unusual: the state was facing a shortage of jute bags to store food grains. Farmers of Bundelkhand in Uttar Pradesh faced a similar trouble after harvesting a bumper crop. Several committed suicide after the government failed to procure the harvest because of a shortage of jute bags (see ‘Death on mounds of a bumper crop’, July 1-15, 2012). A few months before the crisis became a policy headache, in December last year, jute growers in West Bengal burnt their crop by the roadside as the price of raw jute crashed. The irony is hard to miss: while jute growers are incurring losses and moving away from the crop, wheat growers are killing themselves for want of jute bags.

A record food production of 250 million tonnes last year led to a shortage of gunny bags to the tune of 325,000 bales (a bale equals 180 kg). Crop production is expected to fall this year due to deficient monsoon, but the worry over jute bags is far from over. Raw jute production is also expected to fall by 18 per cent this year. Union Food Minister K V Thomas has expressed fears of food grains rotting due to shortage of jute bags. To be on the safe side, states have demanded 350,000 bales of extra jute bags between July and September over and above what the mills can produce.

During the crisis over jute bags, states requested the Union textiles ministry for a dilution of the Jute Packaging Materials (JPM) Act of 1987. The Act makes it mandatory to pack all food grains and sugar in jute bags. States argued for using high density plastic bags as the jute industry could not supply the bags at a short notice. The plastic industry is set to benefit from any dilution of the JPM Act. An official with the Union textiles ministry, on condition of anonymity, says the plastic lobby driven by giant corporates is hard at work. The pie is too big to let go of—the Act guarantees the jute industry an assured market of Rs 5,000 crore every year. While jute bags are bio-degradable and reusable, plastic bags cost less than half. In 1998 and 2001, cement and fertilisers were exempted from mandatory packaging in jute bags. Now the sugar industry is lobbying for exemption.

The problem can be attributed to the ailing jute sector of West Bengal. The state produces nearly 80 per cent of the 11 million bales of raw jute harvested in the country. Of the 83 jute mills in India, 64 are in West Bengal. “Instead of using the advantages of jute as a natural and biodegradable fibre, the industry wants to prolong state protection guaranteed by the packaging Act,” says Naba Dutta, secretary of Nagarik Mancha. The Kolkata-based non-profit has extensively documented the jute sector, hoping for a revival. “Every chief minister, including Mamata Banerjee, paid lip service to continue the protection but shied away from cleaning up the mess.”

The result has been debilitating. An industry that employs 370,000 workers and four million farmers, has seen little modernisation since Independence, when the British mills were bought over by traders and speculators. The entire sector is ruled by a trader-middlemen- politician nexus, says Dutta.

Manish Poddar, chairperson of the Indian Jute Mills Association (IJMA), defends the industry: “The recent shortage of jute bags was due to an underestimation of demand by states. The industry is going through modernisation and old dues to workers are being paid. With an annual turnover of Rs 10,000 crore, the sector is no longer sick.” Numbers, however, contradict Poddar’s claim. Nearly half of the 64 mills in West Bengal are estimated to be running on lease; ownership in several mills is disputed. But neither IJMA nor the National Jute Board, the apex body for jute, could provide details of ownership.

“Leaseholders want to make the maximum profit without investing in modernisation or increasing production capacity,” says Dutta. Between 2007 and 2011, the industry spent Rs 274 crore—a paltry 2.7 per cent of its annual turnover —on modernisation and technology upgradation. Data from the textiles ministry reveal that mills operated at 62 per cent of their capacity at a time when the country faced a shortage of jute bags.

The other tragedy is, Dutta says, the government treats the turmoil in the industry as a law and order problem. West Bengal saw a turbulent phase starting in the mid-1990s when workers resorted to prolonged agitations, demanding their statutory dues like provident fund, gratuity and medical and house rent allowances. In the face of agitations and piled up dues, it was easier for owners to opt for lockout or approach for liquidation. A conservative estimate by Nagarik Mancha shows the piled up statutory dues of workers is not less than Rs 1,000 crore.

For instance, Hanuman Jute Mills in Howrah district is run by a leaseholder, Tepcon International. The mill owes over Rs 13 crore in gratuity dues to 1,300 retired workers, says former trade union leader Shib Shankar Misra. Several have died with dues unpaid. Jhuri, 68, and Ram Awadh Dubey, 63, are retired. They still work at the jute mill as casual labourers to make ends meet. They are paid Rs 200 a day and have to wait for three weeks for the payment.

Prafulla Chakraborty, who floated an independent trade union movement in the mid-1990s at Kanoria Jute Mill in Howrah, says, “Several mills were deliberately declared sick so that they can be purchased later at throwaway prices.” In 1991, Kanoria was bought at a pittance of Rs 3.92 lakh. Today, the pending statutory due of the mill workers is over Rs 30 crore. “Most mills now employ 75 per cent of its labour as casual workers, who are paid just Rs 150 per day as against the statutory daily wage of Rs 450 and welfare benefits. This translates into huge undisclosed profits,” Chakraborty adds.

“Poor working conditions and low wages have led to a crippling shortage of labour. Together with archaic machinery and unused capacity, the mills are unable to supply bags at a short notice and, therefore, resort to cheating,” says a senior consultant to the industry who did not wish to be named. Sugar mills, for instance, were supplied with inferior quality bags weighing 200 g less than the stipulated 630 g, alleged Indian Sugar Mills Association (ISMA) in July 2012.

Abu Sufiyan, 65, from North 24 Parganas district did not harvest his crop last year. His choice was to harvest and sell raw jute at Rs 1,200 per 100 kg while the cost of cultivation was Rs 2,600. To save on the labour cost required to harvest, Sufiyan left the standing crop in his field. This year Sufiyan has reduced his acreage by half. Fertiliser prices have more than doubled over the year and wages have risen at par with the Centre’s employment guarantee scheme. About 600 hectares of low-lying land, suitable for jute, have been sold to real estate speculators in neighboring villages, laments another farmer, Abdul Hamid. 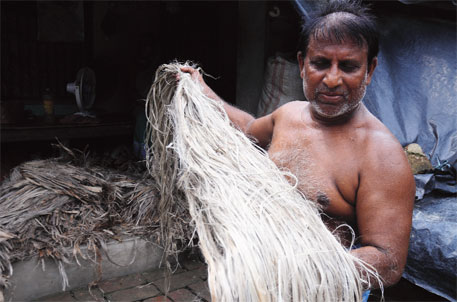 “Mills and large traders control the price of raw jute through a shadow network,” admits a trader from North 24 Parganas, who supplies to seven mills. “They not only drive down the price of raw jute and purchase in bulk when the price is at its lowest but also create an artificial deficit of finished jute products by not utilising their full production capacity,” he adds. For farmers, Jute Corporation of India (JCI) which is mandated to purchase raw jute at a minimum support price could have provided relief. But “JCI has not visited the area for the past eight years,” says Julfikar Ali, a farmer. “Last year we burnt the crop in protest. This year, we might have to commit suicide,” Ali says. In 2011-12, JCI procured less than 5 per cent of the produce. The result: jute production, it is feared, may fall by 18 per cent this year owing to reduced area under the crop.

According to a 2011 report by the International Jute Study Group, an intergovernmental body of major jute producing countries, world imports of diversified jute products, such as shopping bags, carpets, cushion covers, blankets, handicrafts and geotextiles used in construction, is shrinking. The report blames the decline on non-conformity to stipulated product standards, irregular supply by manufacturers and the emergence of bio-plastics.

A 2010 study by World Economic Forum offers some hope. It observes that 95 per cent of the consumers worldwide want to go “green”. To tap the latent demand, India and Bangladesh that grow 90 per cent of the world’s jute need to double their production, just to supply enough shopping bags to the world.

At least 100,000 sea turtles die every year as they mistake plastic bags for food. Banning carbon-intensive plastic bags in the UK alone will be akin to take 18,000 cars off the road. It’s time the industry wakes up to the challenge.