Fall of the paragon

Fall of the paragon 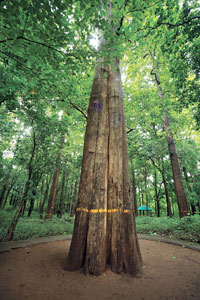 Meet tree No 23. It is the oldest planted teak on earth, rightfully alive in the world’s first teak plantation in Kerala. Standing tall amid the neatly arranged canopy of papery leaves, it is also the oldest living witness to the state’s fall from being the Mecca of teak to a net importer of the timber.

The plantation that hosts the 165-year-old is on the outskirts of Nilambur town. Famed as Connolly plot, it was started in 1846 by the then district collector of Malabar, H V Connolly. With one million trees, it was then spread over 607 hectares (ha). Over a period of time Connolly plot has shrunk to 2.3 ha. It now displays just 117 trees.

So has diminished the state’s rank in India’s teak trade. Until two decades ago, Kerala being home to 30 per cent of the planted teak in India had a lead role in the teak trade. The boom was initiated during 1960-80 when most teak plantations in the state were raised. The area under teak doubled to 53,483 ha between 1957 and 1971, and touched the peak of 78,583 ha by 1988.

Then came the National Forest Policy of 1988, with an objective to increase forest and tree cover. It restricted felling of trees. This dissuaded private players from entering into the teak growing business. Around 20,000 ha of teak plantations have been reduced since. With 58,000 ha under teak plantations, the state now accounts for less than 10 per cent of the national teak production.

A Central government order in 1982 banning felling of teak grown in homesteads without forest department’s permission also contributed to the decline. Traditionally, every Kerala household grows teak. But as per the order, one had to follow a cumbersome procedure for getting permission from the forest department for cutting and transporting the tree planted on their own land. This discouraged people from growing teak on their land and eventually led to the thinning of teak stock in the state.

In 2000-01, the latest year for which information is available, teak plantations accounted for 52.2 per cent of the teak supply in the state, whereas homesteads contributed 32.6 per cent. As a crisis plan to save the sinking teak trade, the restrictions were eased in 2007. The domestic stock could have increased since, says C N Krishnankutty, a forestry expert in Kerala. But the forest department no longer keeps record of teak production from homesteads. “There is not much interest in growing teak in the state,” says a forest official who does not want to be identified.

But with rising income and housing boom, there is no ebb in people’s appetite for this strong, durable and termite-proof timber species.

As a fallout the trade that fetched up to Rs 100 crore to the state coffers in the 1980s, shifted to foreign countries. Kerala, once a teak exporter, became a net importer from Myanmar, Malaysia and Costa Rica to meet the domestic shortfall.

Slackening supply and growing demand have also pushed the price of teak northward. “The average price rise of teak is 10 per cent per annum,” says C H Ummar of Nilambur, a veteran timber merchant and a regular participant in teak auctions for the last 25 years. A study by the Kerala Forest Research Institute (KFRI) in Peechi confirms this. The current price of teak of 100-149 cm girth is Rs 1.4 lakh per cubic metre (cu m). In 2000 it was between Rs 55,000 and Rs 60,000.

Worryingly, the productivity of teak is also declining in the state, says K Jayaraman of KFRI. This is when most plantations in the state are in their most productive age group of 30-50 years. Jayaraman is also the coordinator of Teaknet, an international organisation of teak-growing countries.

His study shows the current productivity of teak is 3 cu m/ha/year against a potential of 10 cu m/ha/year. He is currently collating a position paper on teak. Though the study is not yet complete, Jayaraman says all indicators point to further decline in productivity. 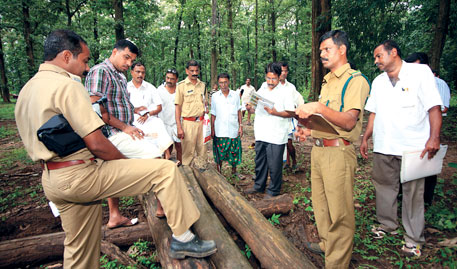 Principal Chief Conservator of Forests of Kerala B Sivaraju attributes the decline in productivity to a host of reasons. These include removal of soil nutrients by teak to support its 60-80 years of growth and deterioration of the site due to soil erosion following second and third rotation of plantation.

But why cannot the lost nutrients be replaced just like in other crops? Jayaraman explains: Most teak plantations in Kerala are on sloppy terrain. Thus fertilisers seep off along with the soil at the first gush of rain. Even if the soil retains some fertilisers, weeds consume them. The natural nitrogen cycle is also not maintained because when clear felling takes place the small branches are slashed and burnt.

It remains an irony that despite earning millions of rupees through teak auctions, the forest department faces severe financial constraints even to carry out thinning of teak. It is an important strategy to keep the crowns small so that the boles grow long, clear of knots. The process is labour intensive, and financial allotment by the government for this is meagre and does not come on time. Earlier, thinning was carried out at intervals of four, eight, 12, 18, 26, 34 and 44 years. Now it is carried out at five, 10, 15, 20, 25, 30 and 40 years.

Analysts squarely blame the declining productivity on poor management. For example, in absence of proper contouring and timely soil conservation measures, terrains with a slope of 20 to 30 per cent face severe erosion. When saplings are destroyed, they are not substituted and eventually the natural cover of the canopy is lost leading to further soil erosion. They also point out that the government owns almost the entire plantations and every single aspect of growing teak is done in the typical bureaucratic way. Necessary data is not collected at regular intervals to facilitate better management.

Teak Planner, a software developed by Jayaraman, projects 30 per cent return from growing teak. Now that the stringent regulation of growing teak has been abolished, he hopes that the entry of private players in teak plantations may bring Kerala back its lost glory.

What Kerala is to India in terms of teak production, India is to the world.

What is driving this demand for teak in the country is the exponentially growing housing industry. Keeping in tandem with it, the demand for timber is rising by 30 per cent every year. “Of the total timber imported in the country, 30 per cent is teak,” says Atul Jindal of Timber Merchant Association of Delhi. 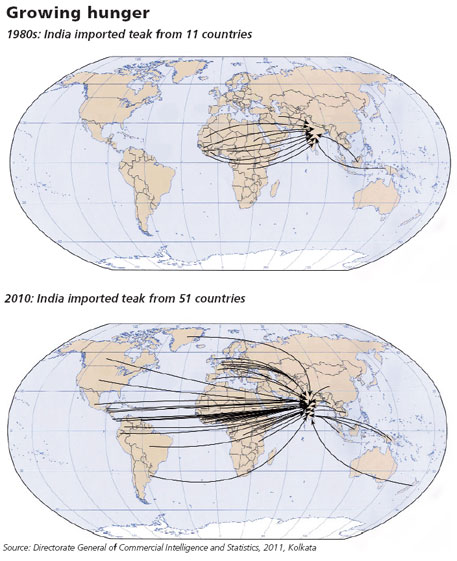 The demand in the last one decade has gone up so much that even the traditional suppliers have not been able to meet it. In fact, some countries have started raising teak plantations just to export to India.

Trade reports suggest that West Africa that accounts for 60 per cent of current imports will not have any teak stock left by the end of 2013. As a result, the Indian teak market is now importing young teak logs, in the age group of six to 15 years, from Central and South America, including Panama, Costa Rica, Columbia and Brazil.

Over the time, the quality of teak from plantations in India has also reduced, says S C Joshi, director, Institute of Wood Science and Technology, Bengaluru. Some 23 million cu m of teak are growing in private plantations where planters use fertilisers and advanced irrigation techniques to grow teak on short rotation periods. This gives them the volume of teak but not the quality, Joshi adds.

Most of the domestic supply of teak comes from plantations in forests, which are owned by the government. But they too have failed. “They are target oriented and do not focus on quality. Generally, the plantation sites are very poor. The maintenance period is kept as low as three years while the plants require at least five to six years of maintenance,” says a senior tree scientist who does not want to be identified.

This has harmed the domestic teak market. If one gets better quality teak from the natural forests of other countries at a price equal to that of domestic teak, why would they buy it from the domestic market, he questions.

In 2009 the Kerala government attributed non-sale of teak and sandalwood as a major reason for its steep decline in revenue from forests. The tree scientist, however, blames the lost interest in domestic teak on the sudden liberalisation of timber import. It should have been done in a phased manner with adequate arrangements to meet the domestic demand. After the liberalisation the demand for timber in the country has increased manifold. But unfortunately our plantations are not able to meet the demand, he says.

Teak on a timber trail

Teak trade follows the trajectory of overall timber trade in the country. In 1982 the Centre banned clear felling of teak and in 1997 came the Supreme Court ban on the felling of any kind of tree. To meet the country’s growing timber needs while reducing pressure on natural forests, the National Forest Policy of 1988 encouraged liberalisation of timber imports. India reduced tariff on wood products as part of the liberalisation policy and commitment to WTO. Foreign investment in the timber and furniture sectors received encouragement. 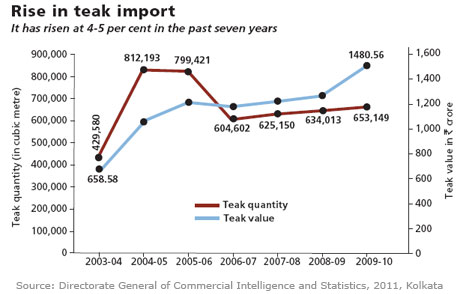 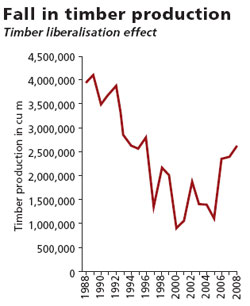 This led to a boom in import. Between 1994 and 2006, India’s import of timber went up 16 times. It emerged as a major log market in Asia. For instance, Malaysia, which used to send most of its log shipments to China till five years ago, now targets India as its main market. As per the International Tropical Timber Organization (ITTO), an intergovernmental body, India’s timber import will exceed domestic production by 2020.

A recent report of the Planning Commission and non-profit World Wide Fund for Nature (WWF) on the timber trade of India says India is a top producer of tropical logs among the ITTO member countries. Despite significant yield from its plantations and receiving supply from international sources, it has been facing severe shortage to meet its growing demands.

The report holds true for teak. “Right now teak plantations in the country cannot meet the domestic demand because it takes a long time for the plant to mature,” says Devendra Pandey, former director of Forest Survey of India. Generally, the rotation period of Indian teak is 40 to 50 years. But there is nothing wrong in the government’s timber liberalisation policy. It is to protect our domestic forests and import the wood from where it is easily available, he adds.