Tikait’s appeal had to do with earthiness and instinct

Mahendra Singh Tikait, a small-time farmer from western Uttar Pradesh’s Jat belt who rose to become a formidable leader in his region and symbolised farmer power for about a decade, then got reduced to irrelevance due to a lack of political tact and a parochial worldview, died on May 15 after a prolonged battle with bone cancer. He was 75. 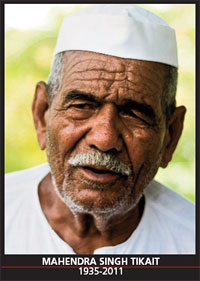 The graph of his political life crested in 1988: after getting 100,000 farmers to siege Meerut for 40 days, his march to Delhi brought the capital and the Rajiv Gandhi government to a grinding halt. His protests initially centred around demanding regular and cheap electricity for farmers to run their tubewells, and more remunerative prices for farmers’ produce. These two warps were filled with wefts of varying hue and extraction.

Consider his Meerut siege. It was his way to undermine Ajit Singh shortly after the death of his father Charan Singh, the only leader Tikait ever recognised— Charan Singh’s bust adorns the campus of the Bharatiya Kisan Union. So when a Muslim woman was abducted in Meerut in the aftermath of the riots there, Tikait decided on a show of strength to demand that the administration find her and restore her to her family. Alongside came the usual list of farmers’ demands.

Tikait had risen in the early 1980s, as Charan Singh aged and then died in 1987. In his early days, he used to go around with a gun slinging from his shoulders. The first major date of his political life is 1986, when he led a successful agitation at the Karmukhedi Power Plant near Shamli; a sub-station that had got busted had not been repaired for a long time, leaving tubewells silent and sugarcane drying in the farms.

His appeal had to do with earthiness and instinct. When Vir Bahadur Singh, chief minister of Uttar Pradesh, visited him in 1987, Tikait famously made him eat out of his hands. These and other standard Jat tricks—Ajit Singh broke into a cough when some farmers offered him a hookah, leading to jokes about his Jat credentials —made him one with the farmers of western Uttar Pradesh. Several journalists have fond memories of being persuaded to eat the moment they would reach his doorstep. His house was a community hall, with everything open to everybody. It was not unusual to go looking for him in the village, and find him manning a tractor or sitting in somebody’s aangan, shooting the breeze. His panchayats had only two people sitting on the dais: the convenor and a senior public figure respected locally, like an imam or a village elder. Tikait would go to the stage only to speak, and then return. In his village Sisauli he was known simply as Baba or Mahatma. He could stun people with his wit and philosophical observations. And he remained the same person through his public life.

Like most mass rural leaders, he had a deep-seated distrust of educated people and kept them at an arm’s length. Village folk know well that urban sophisticates come to them only out of self-interest. Several activists and social groups began to flock to Tikait when his presence grew. NGOs and activists saw in him a mass leader to back their policy interventions of choice. This saw Tikait becoming the face of the anti-GATT protest. Sharad Joshi, in his pre-liberalisation avatar of a farmer leader, once got shoved off the stage. The only ideological people he came to trust were some socialists under Kishan Patnaik, and even that did not last long. Most of his partnerships did not. He even fell out with Harpal Singh, who gave up his job of a teacher to run Tikait’s life. For Tikait lived in the moment, and consequences did not bother him overly. So long as he had his hookah and the loyalty of his followers.

Though he never ran for office, his clout made him a target for solicitation from across the political spectrum. Two prime ministers and several chief ministers visited him. His blessing was all that a candidate needed to win from that region. In 1989, he shunned Janata Dal and silently supported the Bharatiya Janata Party. Yet it was chief minister Kalyan Singh who jailed him, signalling Tikait’s decline.

From 1994 started his journey from being an icon to a caricature. As he flirted with one party after another, his influence waned. He desired that Ajit Singh accept him as the primary Jat leader, but his mentor Charan Singh’s son became his nemesis. Because the Jat voter, notoriously, watches which way the wind is blowing. While they called him Baba, they voted Ajit Singh. It did not take long for Tikait’s rootedness to take the parochial route, airing caste slurs at chief minister Mayawati.

But those who saw his panchayats wonder if even Mahatma Gandhi could get a hundred thousand people to sit in one place for 40 days.

Sopan Joshi is a freelance journalist in Delhi.
sopanjoshi@hotmail.com