Farmers in Doddaballapur in Karnataka say no to organic farming

Farmers in Doddaballapur in Karnataka say no to organic farming 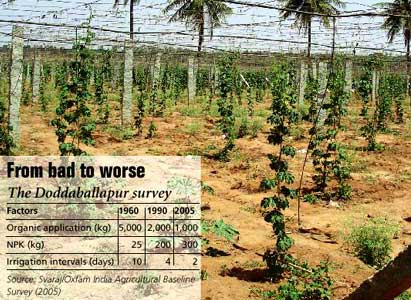 The apprehensions of farmers are linked to the fact that Mukenhalli and Marahalli, the two places in the taluk where the study was conducted, have seen a shift from polyfarming to the chemical fertiliser-intensive contract farming. Many farmers prefer growing grapes as these have more commercial value. Cabbage, potato and tomato are the commonly grown vegetables. The average consumption of chemical fertiliser in the area is 500 kg per hectare (ha) and pesticide is consumed at a rate of 750 millilitres per 0.4 ha.

Besides, farmers are unable to move away from chemical fertilisers because there has been a reduction in biomass production in the deforested areas and a reduction in the on-farm biomass production itself. This reduction is a result of consecutive mono-cropping, which reduces nitrogen in the soil and adversely affects the biology of the soil. "It's a vicious cycle. Farmers use more fertilisers and pesticides to avoid diseases and get a better yield. But these chemicals lead to micro nutrient deficiency in soil, which then leads to plant diseases. Contract farming is leading to desertification as well," says the researcher.

The researchers also found that the high use of chemicals was leading to increased water requirement for irrigation, which also reduced the intervals between irrigation cycles (see table: From bad to worse).According to them, excessive irrigation in a farm leads to waterlogging. One of the researchers tried to put the organic farming theory in practice by experimenting in two different plots of 0.4 ha each. He grew tomatoes of indigenous varieties there, and used only vermicompost -- a nutrient-rich natural fertiliser and soil conditioner. One plot was near a tank and the other was located at a height. The plants in the plot near the tank developed diseases whereas the one growing at the elevated site did not.

The survey also found that 85 per cent of the households used chemical fertilisers, which led to leaching of chemicals into the underground water system, thereby blocking release of micronutrients and trace elements from the soil. The culture of polyfarming, a traditional way of ensuring food security, is completely missing. Mono cropping has affected this food security and also has a telling impact on costs. "Farmers are using fertilisers as if there isn't enough livestock manure available. They are not even interested in keeping an account of soil quality," says the researcher. Polyfarming, according to him, should be practised.

Organic farming is the only way out. Looking at immediate issues won't help. That way, farmers will never be able to see that the road ahead culminates into a dead end.