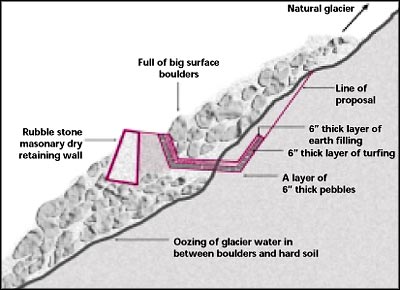 According to Tsering Samphel, director, Leh Nutrition Project (the watershed implementation agency which executed the project), "The idea behind the project was quite simple: to bring the glacier melt from the sparsely inhabited side of a mountain to the densely inhabited one." But executing this idea was quite a tough ask. It took four years of hard labour at an altitude of 17,300 feet around a glacial mountain on the Wari-la pass, near Leh. Says Phuntsog Tundup, the project supervisor, "We had to break every inch of ice".

Moreover, the people in the three villages had initial reservations about the scheme. And for good reason: they dread the Wari-la for its severe cold. Popular lore has it that a fox (wari) was once found dead on the pass and that is how it got its name. But the water-starved people also had very little choice. According to Thupstan Chhewang, member of parliament, Ladakh, "These villagers -- indeed 75 per cent of Ladakh -- were served by glaciers facing the south, but global warming has put paid to most of them." Adds Sonam Tashi of Taknak, "We had to make do with whatever little water was available from the springs. Our problems were compounded by an acute shortage of rainfall this season".

Norphel relates how he convinced the villagers: "We told residents in Taknak, Chemde and Kharu that there was little chance of glacier depletion abating and so they might well have to buy water in the near future -- like people in Leh town. This argument helped us strike a chord with the villagers and they agreed to direct their entire watershed allocation of Rs 23.53 lakhs into the canal project."
The Wari-la canal's total capacity is 30 cusecs and it can accommodate a lot of snow during winter. However, depending on the vagaries of snowfall, the canal's actual discharge is estimated to vary between 3 cusecs to 10 cusecs.

This new water body would benefit about 200 hectares (ha) of irrigated land and about 600 ha of dry uncultivated land. Not surprisingly, the villagers have developed a sense of pride in the canal and recognise their responsibility to take care of it. Rigzin Namgyal of Taknak village even remarks that "They are ready to take on the responsibility of repairing the canal for the next few years -- this will be quite necessary before the water body becomes a permanently durable structure."
But would diverting water create problems for villages that lie on the other side of the Wari-la? Namgyal allays such fears: "The glacial mountain on the pass provides water to only one village, Tangyar. This village does not have any water scarcity. In fact, people here are scared of the flash floods that sweep their cattle away."

According to Norphel, the glacier on the Wari-la is a north facing one; such glaciers fall under the sun's shadow and this keeps them alive.

The Wari-la canal is the second canal that this inventive engineer has constructed, based on his idea of "Harnessing wind blown snow and diverting the melt from glaciers facing the north to habitations in the south." In 2002, he had built a similar canal on Chang-la pass in Ladakh. And now plans are afoot to construct a similar canal for Nang village, which will get water from another glacier on the Wari-la pass.