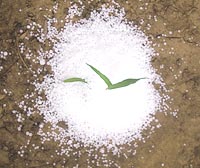 Fossil fuel combustion has increased the amount of nitrogen oxides, which are blamed for the greenhouse effect. Large-scale cultivation of legumes, which support nitrogen-fixing bacteria, have also increased nitrogen in the soil. Fertilisers improved global food production in the last century by increasing the amount of nitrogen available to plants. But now agricultural fields in some countries have nitrogen in such massive quantities that plants can't absorb them. The nitrogen in fertilisers, present in a form called nitrate, is extremely soluble and so easily goes from soil to groundwater reservoirs feeding lakes and streams.

Flush-and-forget sewage disposal systems improved sanitation, but have aggravated the damage to the nitrogen cycle. Instead of returning plant nutrients in human waste to the soil, sewage systems take them to treatment plants. Thus, the nitrogen in human waste too is reaching surface water bodies and oceans.

About 32 per cent of the nitrogen fertilisers applied in USA each year (about 3.6 million tonnes) reaches surface water and groundwater, say Robert Howarth, David R Atkinson professor of ecology and environmental biology, Cornell University, USA, and other researchers.

Their study shows that the excess nitrogen in USA's rivers had increased from 3 million tonnes in 1961 to 5 million tonnes in 1997, which is 45 per cent of the total 11.2 million inorganic nitrogen fertiliser consumed in the US in 1997. The Mississippi river in 1996 alone carried 1.5 million tonnes of nitrogen, says a paper by W R Raun and G V Johnson of the department of plant and soil sciences at Oklahoma State University, USA.


Scientists say the global rate of increase in nitrogen was slow from 1860 to 1960 but the amount has now increased. The amount of nitrogen added to the environment between 1860 and 2000 has increased from 15 Tg (One terragramme is equal to one million tonnes) of nitrogen per year to over 165 Tg of nitrogen per year, write James Galloway, professor of environmental sciences, University of Virginia, USA, and others in a paper published in the April 2003 issue of BioScience.

Half of all the nitrogen ever applied for agriculture was done in the last 15 years, says Howarth in a paper published in Ambio in 2002.

Changing the natural nitrogen cycle has given us benefits: Almost 40 per cent of humans are alive today thanks to the substantial increase in nitrogen through fertilisers and cultivation-induced biological nitrogen fixation. The flip side: the runaway increase in nitrogen in the ecosystem has several serious environmental consequences, many of which are being noticed first in advanced countries.

High nitrate levels in drinking water can cause 'blue baby' syndrome or methaemoglobinaemia. In this rare but sometimes fatal condition red blood cells can't carry oxygen, which subsequently turns an infant's lips blue. Cases, particularly among infants, of stomach cancer and of non-Hodgkin's lymphoma due to nitrate-contaminated water have been reported. Nitrosamines, which are produced from a nitrogen form called nitrite, are reported to be carcinogenic.