Fenced out of a livelihood

Fenced out of a livelihood 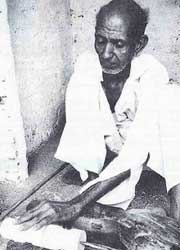 AS NANHE Khan's gnarled but still-dextrous fingers carve a block of wood into wondrous toys, his face registers distaste, for the wood with which he has to work these days is of poor quality. Adding to his disappointment the fact that he is the last in a long line of craftspersons and he is helplessly trapped in a rapidly changing society.

At 60, Khan is titular head of one of the three Muslim Khairati (toymaker) families of Sawai Madhopur in Rajasthan, whose traditional vocation is the making and selling of wooden toys. Khan recalls, "We were a community of about 50 families under the patronage of the Raja and we developed the art of wooden toymaking. The toys of Sawai Madhopur were well-known and in great demand and our ancestors were specially invited to fairs and festivals in the region, where they sold their products."

Khan's words are echoed by the residents of the town's Khairati Mohalla when they describe the kamal ka phool (lotus) whose petals are uniquely carved entirely from wood. But not all the toys are that exquisite because the Khairatis also catered to the needs of ordinary children, carving a variety of wooden carts that children could pull along at the end of a string, with a rattle beating away steadily. They also carved brightly painted wooden dolls and miniature kitchen utensils, which helped to acquaint children with household tasks. For adults, the Khairatis made chess boards to suit every pocket.

Sawai Madhopur is close to the Ranthambore tiger reserve, whose rich, dense forests supplied surrounding villages and towns for centuries with fuel and fodder and the raw material for a variety of crafts and for trading in forest produce, such as gum, amber, honey, fruit and herbs, leaf "plates" and reeds for rope-making. The Khairatis tapped these forests for supply of trees like salar, khair, khirni and dudhi, all well-suited for carving.

Today much of all this has changed. A rapidly declining tiger population has led to the establishment of tiger reserves, including Ranthambore. Entry to the park is restricted and issuing permits to collect wood stopped about five years ago. With wood supply dwindling, the Khairatis had to pay substantially more for wood of their choice, and this made their products economically unviable. Even worse, the cheaper wood that Nanhe Khan now uses is sub-standard and chips and cracks develop. The wood also absorbs large quantities of dye, used to colour the wood. Traditionally, these dyes were earth- or vegetable-based and made by the craftspersons themselves. But, with the advent of synthetic dyes and colours, even the knowledge of traditional dye-making has disappeared.

Khairati Mohalla is only a name today, and the memory of a once-bustling colony of toymakers is kept alive by the three families who still ply the trade. Even the lanes and bylanes in the mohalla reflect times have changed and most of the families living there have discontinued their traditional occupation. Now, the mohalla shops display plastic dolls, battery-operated cars and guns and planes made of tin. Many Khairati families have taken to welding and tailoring and migrated from the area. Even Nanhe Khan doesn't want his children to become toymakers, saying, "I don't regret that forests have been fenced to save the tiger. But I fail to understand why skilled craftspersons like us have been fenced out from earning a dignified living."