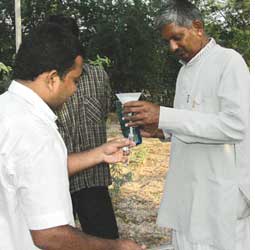 Mahaveer Singh Sukarlai has no formal training in science. But he was able to test and tell a gathering of over 300 people that water from a dugwell in Phenkaria village contained arsenic and zinc in concentrations unfit for human consumption. Phekaria is located on the bank of river Bandi, about 50 kilometres downstream from the town of Pali in Rajasthan. For nearly three decades the town struggled to rein in the pollution from its textile industry. Farmers in the area knew that textile industries contaminated their water bodies, their only seasonal river Bandi and destroyed their land. But they found it hard to prove it empirically. Not anymore.

At a recently held jan sabha (public meeting) Sukarlai took water from a well in Phenkaria and transferred 60 ml into a test tube. He added a couple of reagents and swirled it. After 20 minutes he declared that the sample contained arsenic in levels much higher than the drinking water standard and hence, unfit for human consumption. He analyzed more samples from two common effluent treatment plants (cetps) in the town. In both the samples, levels of zinc and arsenic exceeded the standards set by the State Pollution Control Board (spcb). This shocked the gathering which included farmers, elected representatives, civil society groups from several states, district administration, spcb officials and industry representatives, including cetp operators. Treated water samples failing the tests shattered the myth of cetps being the panacea for pollution control.

Pali was the first industrial town in the country to install a cetp. Today the town had three. But pollution levels only increased. Change in textile processing technology meant constant changes in the treatment techniques. But the plants failed to cope with the increasing volumes and the changing character of effluents. Sukarlai and other farmers, under the banner of Sri Kisan Paryavaran Sangharsh Samiti (skpss), have been fighting against industrial pollution.

At this juncture Centre for Science and Environment (cse) stepped in. The Pollution Monitoring Laboratory, set up by cse, tested water and effluent samples from the area and found that they contained heavy metals including arsenic, hexavalent chromium, lead, nickel and zinc in high concentrations. At such levels, most of these pollutants could cause health problems like skin cancer and other skin ailments, damage the nervous and cardiovascular systems, and reduce immunity levels. In August, cse and skpss together initiated a water pollution monitoring programme for farmers. Field test kits were provided and 60 farmers from different villages were trained to monitor surface and groundwater and treated effluents from the cetps. The first round of tests by the farmers on August 22 turned dramatic when they traced a bypass of untreated effluents from one of the cetp in Pali. Arsenic and zinc were found in high levels. The district collector along with spcb and cetp officials rushed to the site and promised to permanently close the bypass. He assured the villagers t hat the issue of heavy metals will be dealt with seriously.

In mid-September, skpss decided to extend the monitoring activities to the other textile town of Balotra, located about 100 kilometres from Pali. Similar problems were found at all three cetps in Balotra. High levels of arsenic and zinc were found in the samples collected in the presence of cetp and spcb officials. "Our tests suggested that cetps were incapable of treating and removing heavy toxic metals discharged by the industries," said Dayaram Charan, a farmer from Balotra. " Now we have sufficient data to establish widespread occurrences of toxins in treated effluent, river and groundwater...we will take up the issue with the district administration from time to time," said Sukarlai.

Farmers were happy with the solutions provided by the politicians, but cautioned that they would continue to monitor the performance of industries and cetps, and their impact on water resources.