How badly will the millennium bug hit India? While the Y2K Action Force says most government institutions will be able to meet the deadline, there is a sense of panic all around 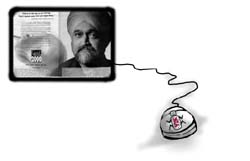 the computer network in the Defence Research and Development Organi-sation's laboratories might lose data generated during the Pokhran nuclear tests; the stock exchanges' online share market may not be able to tell you the status of your shares; or the computerised notice board pasted in airports may say there is no service "today" -- that is, January 1, 2000.

On December 31, 1999, once the clock embedded in the microchips rolls into the next millennium, computers will not be able to process any information stored in its memory. This is what the Year 2000 Kilibyte, popularly referred to as the y2k bug, is all about. It is the day many computers are likely to suffer from collective amnesia.

With barely three months left to update computers and, of course, the deadline non-extendable, there is panic all around. "It's like a national software calamity," says Manoj Meher, a manager with a computer finance company.

As with everything else, India is certainly not ready to cope with the problem. It has already missed the first compliance deadline -- June 30, which has now been extended to October 31. Of the key 11 government departments, where the y2k compliance is vital, nine have a compliance rate of 80 per cent while the rest are yet to ascertain theirs.

The y 2k National Action Force ( naf ), set up to "prepare India for the crisis", had sent letters to 63 government secretaries asking for their status. Barring three, all of them said efforts were on to avert the crisis. However, a source in the department of electronics ( d o e ), on conditions of anonymity, said that all of them have committed to a December deadline. This leaves little time for checking the effectiveness of the compliance. However, Montek Singh Ahluwalia, naf chairperson, says: "By September end, a report will be published on compliance dates of various departments. Most have agreed to a September deadline and the few remaining ones will achieve this by October."

Despite Ahluwalia's assurances, there is a sense of panic among naf officials. naf has sent a draft ordinance to d o e which is to be issued to the departments concerned within two months, that is by November. According to the draft ordinance all offices and organisations (both government and private) will remain open on January 1 and 2 to check the compliance status and y2k crisis management groups will be posted in all districts. "An ordinance with emergency measures equal to that of a national calamity speaks of the government's nervousness in handling the crisis," says a senior d o e official.

However, Dewang Mehta, president, National Association of Software Services and Companies ( nasscom ) , says, "India is not an online country and we have far fewer problems to tackle than the rest of the world." India has about 3.2 million personal computers and about 2,000 main-frames (large computers) which might be affected by the bug. But, according to notifications by various government organisations, there is already a very high degree of compliance. The banks in India are already 90 per cent compliant. According to the Reserve Bank of India ( rbi ), the figure will be 100 per cent by September end. The telcom and aviation sector have also declared themselves bug-free. A survey by the nasscom shows that the preparedness is more or less satisfactory given the fact that we don't have extensive online systems.
The scene in the private sector, how-ever, seems to be gloomy. A survey conducted by the Confederation of Indian Industry ( cii ) among its members shows that only 50 per cent of the respondents had given the y2k problem "high importance", though 98 per cent said they had started work on tackling the bug. The cii report cited absence of information and its solutions as reasons for the delay. Says Lalit Swaheney, convenor of cii 's y2k task force, "Vendors are taking the easy way out by persuading companies to replace current hardware instead of providing a solution."

Meanwhile, the Cabinet secretariat has been holding a meeting every day to review the country's y2k preparedness. Of the identified 11 key government departments -- power, defence, space, telecommunication, railways, civil aviation, surface transport, finance and banking, shipping and ports, petro-chemicals and fertilisers -- only the power sector is yet to comply with the y2k . The rest have officially declared themselves y2k -proof. Hence, the naf has zeroed in on power stations by organising regional-level meetings where experts make a complete plan for y2k compliance in the region.

A drafting committee has been set-up to work out the contingency plan for the power sector. To avert any crisis, the Central Electricity Authority ( cea ) has proposed carrying out an exercise test to test the total system, power station-wise, during October 1999. "At present, our findings indicate that about six per cent of the area could be affected. But we are working on appropriate back-up arrangements," admitted Ahluwalia at a press conference recently.

• The Indian Railways has indicated that they would be bug-free by September 30, 1999.

• Major units of the Department of Atomic Energy ( dae ) have already set up task forces to tackle the y2k problem. The y2k Action Group of dae will monitor and review all y2k activities in a co-ordinated manner.

• The Securities and Exchange Board of India ( sebi ) has kicked off what is called the " y2k Preparedness Project", which is a time-bound schedule for the implementation of a comprehensive plan to combat the problem. sebi has sent circulars to all stock exchanges in the country directing them to submit their report on the millennium bug. After the initial submissions, the exchanges have to submit a monthly follow up report. The National Stock Exchange has almost updated all its internal systems (trading and clearance) supplied to members to prevent the problem.

• y2k activities in the civil aviation sector have been on since the beginning of 1998. The subject of y2k was discussed as an important part of the agenda in the meeting of Asia Pacific Air Navigation Plan Implementation Regional Group in August 1998 held in Bangkok. y2k -related activities in aviation include preventive actions and contingency planning. Activities are being monitored up to the level of the secretary, who reviews the progress of y2k compliance at ministerial meetings.

All the systems of the Airport Authority of India have been y2k assessed, tested and made y2k compliant except Mono-pulse Secondary Surveillance Radars installed at six airports - Thiruvananthapuram, Hyderabad, Ahmedabad, Chennai, Calcutta and Guwahati. All these radars are scheduled to be made y2k compliant by October 15, 1999.

• The ministry of petroleum and natural gas has constituted an Action Group. The Oil and Natural Gas Corporation is heavily dependent on it systems and embedded systems for criti-cal operational activities. A detailed assessment of it systems has been made and the target date for achieving y2k compliance was set for September 1999.

• Indian Oil Corporation ( ioc ) has made a time-bound plan for corrective action which is under implementation. ioc has assessed the potential impact of y2k in office automation systems, telecommunication systems and process control systems. Necessary modification and correction are being carried out. ioc is also contacting their major customers, bankers, vendors and suppliers to confirm their y2k readiness status.