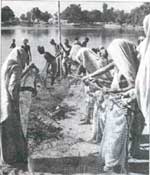 ON THE outskirts of Andhrathari village in the Madhubani district innorth Bihar is a shimmering pond -- Narkatia, surrounded by sprawling wheat fields. A centre of hectic activity today, this pond was carapaced with hyacinth and used as a garbage dump only 4 years ago.

At present, 40 women from the nearby Mallah tola (45 families of fishermen), abutting Andhrathari, are engaged in modern inland fishing. The task includes cleaning the pond, stocking it with fish seeds, breeding and fishing scientifically, and marketing the catch.

"Nobody thought that this pond could be turned into a profitable enterprise," says Buchhia Devi, 35, of nearby Thari village. The credit goes to Adithi, a Patna-based ngo which involved illiterate and landless Mallah women in its fishery project funded by the Swiss Red Cross and the state government, under the Support to Employment Programme which began in1990.

Initially, the men restrained women from participating in the project. Over time, foresight overthrew caution and women started participating in harvesting and marketing. Says Purnima Devi, "All our lives, we were dominated by our husbands. Now, we happily work shoulder to shoulder." Men echoed the same opinion.

The ponds were initially under the jurisdiction of the Fish Farmers' Development Association, but in early 1991, the state government agreed to lease out the ponds to the Mallah women. They became part of a one-of-its-kind women's fishing cooperative, the Madhubani Mahila Matsyapalak Sangathan, comprising 300 women from 8 villages. However, bureaucratic obstructions were at play against the group's smooth functioning. The block development officer withheld the pond's lease order because the Amin (land surveyor) was reluctant to measure area of the ponds, forced into opposition by pressures from the upper castes controlling the state's fishing business.

The women finally got the 82 ponds in the block on a 10-year lease. In the beginning, they found the ponds abjectly unfit for fishery. "We put in 4 months of hard labour in 1991 to clean up," says Mantaria Devi, 42, secretary of the Thari women's group. They were trained for 15 days at Rajendra Agriculture University, Muzaffarpur, and at the government fishery department, Patna. Depending on the pond's size, Adithi gave the groups loans ranging from Rs 40,000 to Rs 90,000, including a grant of Rs 6,000 to meet the input cost of fish seeds, feed and chemicals.

This substantial harvesting brings to the villagers a sense of fulfillment. Last year, villagers from Usral sold fish stock worth Rs 1 lakh in the local haats (markets) and in nearby Darbhanga town. The net profits were about Rs 70,000. Says Ram Sunder Devi, 28, "We have not only repaid a part of our loan, now we can buy nice clothes for our children and even offer good food to our guests."

However, infighting between groups over allotment of work schedules and allocation of ponds often mars the fishing activities. As a result, the yearly productivity, normally wavering between 300-400 kg per acre (0.405 ha), falls considerably.

Compounding problems of group adjustment is harassment by the upper castes. Radia Devi of Usral brandishes a clenched fist and hollers, "They are afraid of our unity." But threats and intimidation continue. "They throw agricultural waste in our ponds and try to poison the fish," alleges Bikal Mukhia of Bataina village.

The lease period of the ponds is also a matter of some contention. The lead time for fishing to become remunerative is 4 years: so the demand to raise the lease period to 50 years and fix the rent rationally finds unanimous support. A short-term lease evokes fears of losing the ponds soon because of political pressure from the dominating castes. After vehement persuasion, the annual rent has now been fixed at Rs 500 per acre but uncertainty still ripples through the groups. The ponds were earlier auctioned to fishermen's cooperatives, most of them controlled by the state's powerful fishing mafia. Even now, the rent is revised every alternate year, and the apprehension is that they could be notched too high. The only barrier against such a move are the newly-vociferous women, and they might succeed where the men have failed.