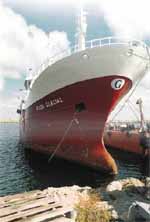 the Southern Ocean, comprising the southern-most parts of the Atlantic, Pacific and Indian Oceans that surround Antarctica, is facing its greatest environmental threat ever. Illegal fishing boats are pushing marine life and seabirds to the brink of extinction. Particularly affected by this 'piracy' are the populations of the Patagonian toothfish ( Dissostichus eleginoides ) and several species of the albatross.

And if any country can check this, it is Australia, which has employed some useful and unique ways to achieve it. The most effective of these is the Australian fishing zone ( afz ), which generally consists of waters within 200 nautical miles (about 370 km) of the coastline of Australia, with the exception of areas where there is a common boundary with other nations' exclusive economic zones ( eez s). The United Nations Convention on Law of the Sea allows Australia the right to claim afz , but with various obligations, including the need to ensure proper conservation and management of the living resources. The Australian Fisheries Management Authority ( afma ) is responsible for management of fisheries in the afz .

afz is especially useful to check fish piracy in the area around Australia's sub-Antarctic territory of Heard and Macdonald Islands ( himi ), located 4,000 km southwest of Perth. While the climate here is hostile -- 256 days of snow in a year and wind speeds up to 210 km/h -- the fishing zone contains Australia's most recently developed fisheries based on the Patagonian toothfish.

The himi region is listed on Australia's Register of the National Estate, which lists areas of national environmental importance requiring some level of protection. The register records himi as the only unmodified example of the sub-Antarctic island ecosystem in the world. himi is also on the World Heritage List.

The commercial value of the toothfish, which is prized for its meat, was discovered only a decade ago. Yet, in 1997, the total illegal catch of the toothfish was around 100,000 tonnes, worth more than us $325 million. A growing market propels this expansion -- the toothfish has a good landed value of us $ 2.6 per kg, with retail prices hovering around us $7.15 per kg. Japan and usa are the biggest importers.


The Patagonian toothfish lives in deep waters (from 300 metres to 3,500 metres) and is found on submarine mountains and continental shelves around most sub-Antarctic islands. Weighing about 100 kg, it can live up to 50 years and grow to lengths of more than two metres. It grows slowly and does not breed until it is at least 10 years old, which makes its populations quite vulnerable to overfishing. As in the case of many deep sea species, not much is known about it.

What is known, however, is that its stocks are depleting fast due to illegal fishing. If this continues, its population will fall so drastically that the species will not be available for commercial fishing within the next two to three years. Greenpeace, the international environmental pressure group, claims that more than 90 per cent of the total catch of the toothfish is harvested by illegal and unregulated longliners -- ships with lines of baited hooks that may trail a few kilometres behind them.

Longliners are not permitted in the Australian eez . They kill seabirds and mammals by the thousands, including the magnificent albatross, the largest flying bird in the world that seeks the remoteness and inaccessibility of the Antarctic islands. Of the 24 albatross species, 20 are found in the Southern Ocean and all 20 are endangered -- two of them critically. Albatrosses fall prey to longliners as they have a fatal weakness for the snack-sized bait used in these vessels. The birds often get caught in the hooks and are drowned. "This year as many as 100,000 or more albatrosses have been killed on illegal longliners in the region," said Denise Boyd of Greenpeace.


Who are these people breaking international laws and creating environmental problems? They are individuals and companies involved in a multi-million dollar businesses. Three countries -- Mauritius, Norway and Chile -- and their companies are the worst offenders, according to the International Southern Oceans Fisheries (Isofish), which has its headquarters at Hobart in Tasmania, Australia. Isofish was established in November 1997 by the Convention on the Conservation of Antarctic Marine Living Resource ( ccamlr ) to report on the activities of unlicensed longliners.

Isofish identified the three above-mentioned countries after extensive investigation. afma and the Royal Australian Navy caught some of the offenders red-handed; one fishing boat was seized in December 1998. But the traffic goes on unabated.

Controlling toothfish piracy and enforcement of law is up to afma . John Davis, official spokesperson for afma , says: "Isofish has made numerous allegations of illegal fishing which afma cannot support until such allegations are proven in a court of law."

Mauritius: Isofish concluded that Mauritius has a near monopoly on the landing of about 10,000 tonnes per year of the international quality, quick frozen toothfish caught by longliners equipped with blast freezers, which are operated by Danish and Norwegian interests. Mauritius handles about 40 per cent of the trade in lower quality toothfish frozen in blocks within the ship's freezer.

The vast majority of Mauritius' exports and imports pass through the wharves of Port Louis. Within the fishing sector, large volumes of yellow-fin tuna are transhipped to Japan, while skipjack tuna are canned and mostly re-exported. Five local companies are involved in reef fishing for the local market using a dozen longliners.

Isofish says that four custom-built longliners are owned and operated by the Glacial group, a small group of companies controlled by Magne Hisdal and his partner Einar Nystad, both well-known businessmen in Bergen, Norway. All four were built in Norway as two pairs of sister ships. According to Davis, one of the four vessels, Aliza Glacial , was apprehended and detained by afma after the Royal Australian Navy had spotted them. Davis says a Norwegian bank had mortgaged the vessel. The bank finally took action, making the poachers sell the boat in order to liquidate the asset and secure its interest.

Davis says that "flags of convenience" are put on vessels to avoid rules and regulations and appear misleading. While the Aliza Glacial had the Panama flag, Big Star , another major fishing vessel, was flying the Seychelles flag. Both vessels were convicted for illegal fishing on October 9, 1998, along with the Salvora , which was flying the Belize flag. In the last two cases, the vessels were confiscated by afma , along with the toothfish haul. The West Australian Magistrates Court fined the master and fishing master of the Salvora a total of aus $100,000 ( us $65,000 at present rates).

This seizing of two high-profile boats was an important victory for afz and the Royal Australian Navy. They have been engaged in a long battle with foreign fishing vessels that enter Australian waters in search of the prized Patagonian toothfish.

Chile: The southern seas around Chile and Argentina are the source of some of the most productive and valuable fisheries of the world, according to Isofish. The southern Chilean bottom fishery is located in a remote sector of the sea. It is characterised by a narrow, indented continental shelf with a sinuous coastline and a complex network of fjords and internal channels. The fish species here are facing extinction, and are quite vulnerable to overfishing because of their low growth rate and long life spans. The fish targeted here is the Austral hake.

But the demand for fish is rapidly increasing. Exports from Chile's southern bottom fish industry earned us $270.4 million in 1997, which is 14.4 per cent of the total value of Chile's fish exports.

Chile's fish pirate king is businessman Roberto Verdugo, a former undersecretary of fisheries under the Pinochet military junta. He is the largest single trader in frozen Patagonian toothfish harvested through illegal activities. Verdugo was responsible for the extraordinary flexibility introduced into the nation's fishery management system in the final years of the military junta, leading to a five-fold increase in fish landings between 1986 and 1988. He now controls the Intesa group of companies that exports fish products globally.


According to afma , ccamlr had been debating management and compliance measures to be applied to the convention area for several years without success. "A failure to deal effectively with illegal fishing at this year's meeting will mean that [the authority of] the organisation ( ccamlr ) will be seriously undermined," said Robert Hill, environment minister of Australia, addressing the 23 member nations of ccamlr .

Says E de Salas, executive secretary of ccamlr : "I cannot comment. All I can give you is a report in April on the comments of the members." The 50-page document he sent outlines in-depth conservation measures adopted by the commission. The effectiveness of these measures remains to be seen.

At the November 1997 convention in Hobart, a spokesperson for ccamlr , who did not want to be named, said: "Russia has been frustrating negotiations and arguing against taking tough action against poachers." Clearly, all world bodies have failed to take effective steps to deal with fish piracy. One reason is that it is difficult to assert sovereign rights over eez s around remote sub-Antarctic islands.


Isofish said Mauritius should be invited to join ccamlr at once and that the country should cease trade in illegally harvested toothfish. Countries with eez s must do more to stop toothfish pirates. New regulations should be adopted, including policing of all deep sea fishing vessels entering ports in Mauritius. Valid fishing licences should be shown and records of vessel movements should be maintained.

Isofish suggests the Norwegian government withdraw its investments from those involved in toothfish piracy. It has sought that the government conduct an inquiry to review and publish a 'black list'. It should then cease all involvement with poachers. Norwegian fishing licences should be withheld from anyone involved in illegal fishing.