Fisherfolk in Odisha try their hand at dairy and poultry farming 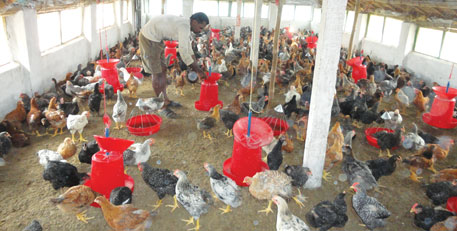 DUSHASHAN Behra of Gabakunda village in Odisha’s Puri district, who describes himself as a fisherman, is currently unemployed. He is planning to buy chicks to start a poultry business. “It will be quite a change from fish to chicken,” says Behra in nervous anticipation as he squats, smoking bidi, in the courtyard of his thatched hut.

In neighbouring Mirjapur village, Sibananda Behra, also a fisherman, is worried about the delay caused by cyclone Phailin in starting his dairy farm. “A portion of the cow shed broke down as a tree fell on it during the cyclone in October last year,” he says, pointing to the broken shed. “This has delayed our plans, but we will buy the cows soon.” Sibananda is gearing up to spend two days in Bhubaneswar, the state capital, observing and selecting the cows he should buy for his farm.

The Behras have not given up fishing. They are part of an experimental project funded by the World Bank. The Odisha gove rnment is implementing the Integrated Coastal Zone Management Project (ICZMP) in its coastal re gions. Among the several initiatives un der lined in the state’s Rs.227-crore project (see ‘What is ICZMP?’), providing alternative livelihood options to the fishing community is a priority for the government.

A substitute for fishing in the state is crucial because fishing is banned in the sea for seven months a year. The Orissa Marine Fisheries Regulation Act, 1982, bans fishing along the coast from April 15 to May 31 every year as it is the fish-breeding season. Fishing is also prohibited in specified turtle congregation areas between November 1 and May 31 every year. Fisherfolk suffer during this period since most of them are landless or have small landholdings.

To take care of this, the state government launched ICZMP in 2010 which introduced alternative means of livelihood, both fish-based and non-fish based. The options include integrated pisciculture, hygienic dry fish preparation—drying fish with a blower fitted to a solar panel—dairy, poultry and cold chain marketing of fish, which involves ferrying the fish to the market in ice boxes. At present, these activities are taking place in 30 villages around Chil i ka lake. “Under the alternative livelihoods programme, the villages are di vided into selfhelp groups (SHGs) and a consultative process is followed where the groups choose their livelihood op ti on,” says Priyanka Ray, fisheries development officer with the fisheries department in Puri.

SHGs typically comprise 10-15 members from different families. Every SHG has a president and a secretary. SHGs are given money—ranging from Rs.4 lakh to Rs.8.5 lakh—in instalments to construct buildings or enclosures and source assets for their livelihood options.

An SHG generally gets Rs.4 lakh, of which Rs.2.5 lakh is used for infrastructure development—enclosure, for insta nce—and operational activities, such as buying ice, cost Rs.1.5 lakh, says N C Biswal, fisheries specialist at ICZMP’s State Project Management Unit. “Specific schemes, though, have variable project costs. For example, a dairy project costs Rs.4.8 lakh, poultry Rs.5.28 lakh and hygienic dry fish preparation Rs.8.15 lakh because it requires investing in a solar panel,” he explains. He further says that each SHG gets trained on the livelihood option, besides receiving a training in book-keeping. So far 248 SHGs have been formed in 30 villages, he adds.

The experience of the people has been varied. Some are hopeful, while others remain sceptical and are unhappy with the options provided.

“They told us to choose from either dairy or poultry. If they had told us about fishing-related activities, we would have definitely gone for that,” says Kailash Chandra Jena, a fisherman from Gabakunda village. Another fisherman alleges that the height of the enclosure for the poultry farm was not specified. “Now the authorities are tel ling us we have to break the wall and re size it before we are allowed to buy chicks. Will they pay us to do that?” he asks.

Karna Behra of Arakhakuda village thinks boats will be more useful. “Boats that we can take into the sea cost Rs.2-3 lakh, while nets cost an additional Rs.1.5 lakh. If 15 fisherfolk get a boat, it will sustain 15 families,” he adds.

Some even allege misdoings, like many brothers of a family forming a group and claiming money which is not put to use. Project authorities deny the allegations. “We have a process wherein SHGs are formed after surveys and money is disbursed in instalments,” says Ramesh Dalei, community mobiliser for Arakhakuda village. “We verify construction related vouchers and send photos of the work done to the State Project Management Unit. Only after this the second instalment is transferred to the group’s bank account. We also conduct surprise checks,” he adds. His role is to engage with communities and guide them through the process of realising the alternative livelihood option.

With the help of community mobilisers, some SHGs have organised and distributed the work among them.

“We have got Rs.1.40 lakh for the cow shed and Rs.10,000 for electrical fittings. The remaining amount will be spent to buy cows. In our group of 15, some will cut grass, some will feed the cows, some will clean them, some will be responsible for milking the cows and some will sell the milk,” says Sibananda, excited about the prospects.

In neighbouring Arakhakuda village, Buli Di is a proud member of the Gajalakshmi society. Earlier her group, comprising 10 members, would dry fish on the ground. “It was unhygienic because crows, houseflies and ants would attack the fish. We dry the fish in the solar machine now and it’s more hygienic,” she says. Besides a training in operating the solar machine, she has also received training in making prawn pickle, fish cutlet and prawn powder.

But Mihir Kumar Jena of Mirjapur village is facing one handicap. “A solar fish dryer was installed two months ago. The problem is it does not function without electricity,” Jena says. His group lets other villagers use the drying unit and charges Rs.5-10 per kg of fish. Jena is cautious about the project and feels that a follow-up is crucial for its success.

Project director A K Patnaik takes a more practical approach. “These are pilot activities. We are testing them through these three-four years of the project cycle. All the activities may not be successful. At the end of the project period, we will sieve out the elements that are successful and those will be replicated in the second phase,” he says.

For Patnaik, the learning has been “immense”. “One is integration, which is the key. With 10 different government agencies working on this project, they have come to realise that working together is mutually beneficial,” he says. The second big learning, he adds, is the in-depth knowledge gained of the coa s tal system after a one-year study on co a s tal processes. For the people of the villages, however, it is a wait-andwatch as well as a trial-and-error game until 2015, when the first phase of ICZMP ends.
Print edition Print edition Features World Bank West Bengal Poultry Odisha Integrated Coastal … India Gujarat Fisherfolk Down to earth Dairy Development Animal Care
Donate Now