Fishworkers' campaign draws attention to the sale of marine waters

Fishworkers' campaign draws attention to the sale of marine waters 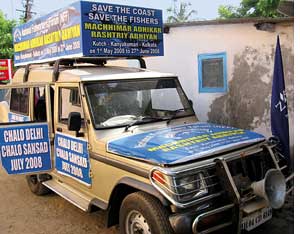 "There is widespread sense of outrage amongst the country's coastal communities," says Harekrishna Debnath, chairperson of the National Fishworkers' Forum. The indignation stems from the loss of traditional livelihood. With privately-operated special economic zones scything through mangroves and hazardous industries playing havoc with coastal ecology, fishworkers are finding it increasingly difficult to make a living. Many of them have taken to the streets Debnath is leading a campaign, the Machhimar Adhikar Rashtriya Abhiyan, to draw attention to the sale of India's marine waters to private players.

The campaign began on May 1 at the port town of Jakhau in the Rann of Kutch--the day the draft coastal zone management (czm) notification was finalized.For nine days fishworkers travelled along the coastal villages of Gujarat holding public meetings and rallies and agitating against the draft czm for ignoring rights of coastal communities. "Hazardous units, manufacturing petrochemicals, pesticides and agrochemicals, have mushroomed along the Gujarat coast. Refineries and private ports have compounded the misery of people living in these areas. Our survey shows that the worst culprits are the Adani group, which is building a port at Mundra, Sanghi Cement company in Sanghipur in Saurashtra and Atul Agrochemicals in Bharuch," says Debnath.

The campaigners entered Maharashtra on the tenth day of their journey, stopping in Mumbai for a day-long seminar on the International Labour Organization's Convention on Working in Fishing (see box Fisher's rights). The fishworkers will traverse the coasts of India, and the journey will culminate in Kolkata on June 27. The campaigners also hope to organize a huge rally in Delhi in early July to warn the government against selling the country's shores to private operators.


"The yatra has been an eye-opener of sorts. I have been associated with the country's fisheries sector for decades, but have never seen such misery. The fishing villages have no drinking water, no sanitation, no primary health centres and very few schools," says Debnath recounting several horror stories. For example, at a public hearing in Dahej, in Bharuch district a fisherman, Gaganbhai Rathod, openly accepted that the 75 fisherfolk families in his village do nothing but sleep through the day. At night they venture out to rob their fellow villagers. Many are caught and beaten mercilessly, Rathod said.

Debnath rues that with fish production in Gujarat falling from 700,000 in 2000 to 400,000 by the end of 2007, many fishermen have little choice but take greater risks. "A growing number venture into deep seas and often land up in Pakistani jails. More than 500 boats from Saurashtra have been confiscated by Pakistani authorities. You think the fisherfolk are mad to take such high risks?" he asks. Debnath also says that none of the fishing villages had water, health and sanitation facilities. Women, evidently, suffered the most under the circumstances.

Vasai has close to 6,000 fishing families. I am 69 years old and have been fishing since I was 18. Ours is a traditional fishing business and we have lived in Vasai for the last 150 years, but have no land. The government has not provided us with any drinking water facility either.

Of late, pollution in the sea has reached dangerous levels. The sea is being reclaimed in Mumbai to make buildings and the water gets pushed to our areas. Every year sea levels rise, destroying our huts. All our money goes in reconstructing our homes. Large companies like the Oil and Natural Gas Commission (ONGC) and Reliance have dug oil wells here. ONGC alone has around 600 wells. These companies have taken away our fishing station. These companies take out oil, leaving behind a thick black oily sludge which causes a burning sensation in the eyes. In 2003 we got very angry and attacked the ONGC office, after which a committee was set up to probe the pollution by the company. But this committee has done nothing to protect us.

My village has 3,000 people (800 families) all of whom are involved in fishing. We know nothing else and all of us are illiterate. The government and the Adani company is forcing us to part with our land to build the Mundra port (see Zone of Contention, Down To Earth, May 13, 2008). We have been prohibited from fishing. Earlier in a good season I used to make Rs 25,000 in 15 days but now I can barely make Rs 4,000-5,000.

Ours is not a round-the-year business. We work hard for nine months and are idle between June 10 and August 15 when fishing is banned. If we do not earn in these nine months, there will be nothing for us to eat throughout the year. Every year fisherfolk families travel 80 km towards the sea and stay at Tugadi bundar in Kutch district for nine months. We stay in makeshift tents. For the last 40 years we have been asking the government to give us land so that we can stay in slightly more secure houses, but it refuses to give us even an inch of land. Now we are being forced to vacate our land in the village.

My village has 200 families of which 100 are involved in fishing. These families annually migrate 30-50 kms away in search of fish. The Mundra port has sounded a death knell to our livelihoods. It has polluted our seas and there is no fish left now. Our nets are destroyed by big ships and land has been taken for constructing the port.

Mangroves, so important for fishing, have been destroyed by the Mundra port. Earlier, during the monsoon when the sea would become rough, fish would come to mangroves to find support in the long floating roots.The fish would stay there for the season and even leave their spawn in the grove till they could take care of themselves. But with mangroves been chopped off, fish population has declined.

The state government is giving land to everyone, but the Muslim fishing community. Earlier I could make about Rs 3.5 lakh in nine months, but now I barely manage to earn Rs 1.5 lakh.