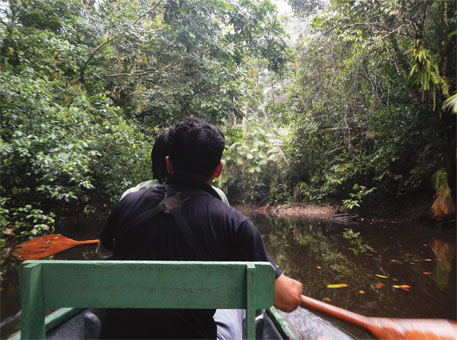 We are slicing through the brown, swirling waters of the Napo at a fast clip. It is a wide river and the far bank is often not visible. This major tributary of the mighty Amazon is our gateway to the world’s most pristine rainforest, the Yasuni National Park, a place scientists consider the most biodiverse on the planet. It is a two-hour ride of high expectation as we set off from the small town of Puerto Francisco de Orellana where tourist guides from different wildlife lodges ferry their guests to different destinations.

But conflict with nature is evident from the start. Puerto Francisco de Orellana, better known as Coca, is an oil town and its small airport has a large sprinkling of oil workers among the planeloads of tourists bound for Amazonia as the rainforest is called. Standing out in the crowd are the blue-uninformed Halliburton employees who do things like clearing waste from oil wells, lining new wells and other engineering and construction services. Halliburton is the world’s leading oil services company with a turnover of over $28 billion and its presence here raises the first red flag about what lies ahead.

Our boat is headed for the Napo Wildlife Centre (NWC) where the Anangu community of Kichwa people runs a luxury lodge inside the Yasuni, which is the core of the Ecuadorian Amazon. This tiny Latin American country, sandwiched between Peru and Columbia, has just about two per cent of the Amazon basin but the Yasuni more than makes up in its richness of wildlife what it lacks in size. Brazil may have 40 per cent of Amazonia but, says Dany Abalos, a trained naturalist guide from the Riobamba Polytechnic University, has the most magnificent biodiversity. “We think the Yasuni National Park is the last true wilderness of the world,” says Abalos, who has worked in the park for about eight years. He is probably right.

Everything from amphibians, birds and mammals to insects and vascular plants reach maximum diversity in Yasuni and it was declared an International Biosphere by UNESCO in 1979. With 600 bird species, 150 types of amphibians—this is more than what all of North America contains—and most impressive of all 100,000 insects, Yasuni is in a class of its own. Location is the reason for its incredible diversity of wildlife: the reserve sits at the intersection of the Andes, Equator and the Amazon basin. The park forms the nucleus of the 2.5 million-hectare (ha) biosphere reserve along with the territories of the indigenous Huaorani people. Parts of this territory have been declared an “intangible zone” or off limits to outsiders because two of the Huaorani tribes, the Tagaeri and Taromenane, have sought to remain isolated. But not all of the Yasuni Park’s 980,000 ha is well protected. The curse of oil has brought in roads, pipelines, settlers and the inevitable devastation along with displacement, disease and death.

As we turn a bend in the Napo, a constant flame inside the forest catches our eye. Assorted machinery, from earthmovers to rigs and oil storage tanks, scar the riverbank. Gas is being flared from two wells of Spanish oil company Repsol. The flames are not good for the forest and its denizens because they add to air pollution and increase the risk of forest fires.

Oil is a controversial issue in the Yasuni, where local communities have given up their traditional hunting and logging to set up eco-tourist lodges to sustain themselves and the forest.

Repsol, complains Abalos, is not willing to make the investment required to tap the gas; instead the gas is flared, killing insects and creating other environmental impacts which will only be felt in the future. Petroleum drilling in Ori ente is a hot issue with indigenous people who stay in the Yasuni, some of whom have vowed “to fight to the death” to protect their territory against the incursions of oil companies.

This is not exactly a new problem for the indigenous people of whom there are at least six nationalities, who live in small, scattered communities or clans made distinct by their cultural practices. There is the Kichwa, who are the most numerous at 100,000; Huaorani, the best hunter-gatherers with deepest connection to the forest; Secoya, Cofan, Shuar and Achuar Siona. Kichwa are found throughout Ecuador, defined by their language, spoken widely throughout Amazonia.

Oil has been conflict-ridden from the time when petroleum companies first began drilling in the Oriente, as the indigenous people call this part of the rainforest. In the 1940s, a raiding party of the Huaorani killed a dozen or so Shell workers who had intruded in their traditional land, forcing the company to cease operations. It wasn’t until 1972 that drilling resumed in the Oriente after missionaries had subdued the aucas or savages as the Kichwa call the Huaorani. That’s when the US company Texaco spudded its first well and extracted oil for the next 20 years, leading to a headline case involving a class action suit by the indigenous communities against the US behemoth Chevron which had bought Texaco in 2001. Chevron has been ordered to pay $18 billion in compensation for the damage it caused to the Oriente from oil spills, and the irresponsible and unlawful discharge of 4.3 million gallons of highly toxic water. Rights organisations in Ecuador say the worst fallout of Texaco’s operations was the displacement of indigenous communities who could no longer fend for themselves. Chevron is filing yet another appeal against the award.

Mention the Chevron case and indigenous communities turn silent and apprehensive. But they also know that staterun, domestic petroleum companies Petroecuador and Petroamazonas, which extract about 70 per cent of the oil, do not have a much better record. Besides, President Rafael Correa’s recent ambivalence on drilling in the Orient specially after his path-breaking ITT initiative (see ‘An audacious proposal’) that aims to keep oil in the soil has unsettled the indigenous communities. Correa, re-elected for the third time on the back of progressive reforms that encompass the environment, has opened a new round of bidding for oil prospecting in the Oriente.

All these troublesome questions slip into the background as Remy, a young Anangu Kichwa guide, transfers our group from the motorised boat to a dugout canoe that takes us smoothly into the Yasuni. Paddling through a dense overhang of trees and lianas that allow little sunlight to come through, Remy and Abalos transport us to timeless culture in which man and forest are intertwined.

The blackwater stream over which we glide is dark and glistening. Born of the forest itself unlike the Napo which finds its source in the Andes, the water has a tea-like tone that experts say comes from the tannins drawn from the forest litter. In the gloaming, a long tree bark turns out to be a sinister caiman whose unblinking eye fixes us in a basilisk stare. It begins to rain as it often does in this forest but no one is complaining. As we peer through the ripples, Remy motions to some ripples in the stream. Something is stirring. And as soon as he drops the paddles, out comes a family of giant otters which frolic for our delight. The giant otters are a rare species unlike the crazy looking hoatzin which fills the evening with its strange grunts,groans and hisses. “That’s just the stinky turkey,” says Abalos who is keen that we sight the elusive tamerin monkeys as they make a crossing in the branches of the giant kopak tree overhead. It is this abundance of nature that the Anangu are hoping will bring in high-paying tourists to their beautifully constructed tourist complex inside the Yasuni Park.

The Anangu has set aside 30 per cent of its community land totalling 6,475 ha for tourism, while the rest 21,044 ha of pristine rainforest is protected land. The aesthetically built cir- cular cabins made of local wood and thatch were built by the Anangu who took two years to erect the complex of 10 cabins, an impressive dining room with its nine metre watch tower and hybrid power systems that use solar and diesel energy.

Managing the logistics of entertaining tourists has been tough for the Kichwa, some of whom are just learning the ropes. “We have given up hunting and logging because we are committed to conservation. The Anangu is keen on setting an example for sustainable and ecologically sound tourism,” confides NWC manager Jiovanny Rivadeneira. Earnings have been good after they reclaimed their tourist centre from a US NGO that was managing it till five years ago.

Explains senior naturalist Jairo Sanchez: “They were getting no returns when the NGO was in charge. Last year the 27 families who make up the Anangu community got $3,000 each.” They also get to work in NWC in a variety of jobs, from chefs to guides and the cleaning staff. A chunk of their earnings have gone into providing meals for their schoolchildren, finding better teachers and generally improving the facilities so that the children remain in school. Eco-tourism promises a viable alternative to the indigenous tribes. But even this is coming under a cloud as oil makes further inroads into the Yasuni. The Sani Isla Kichwas who run a similar wildlife resort a short distance away are now threatened by displacement.

Delfin Gualinga, a guide from the Sani Isla Lodge, whom I met at the Anangu community centre, worries that things may be getting out of hand. Initially, this community of around 400 Kichwas, was beguiled by the offers of Petroamazonas to set up a school and rehabilitate them elsewhere. However, they decided in favour of preserving the jungle and staying put. Their tourism venture is only now turning the corner after some misadventures in the past.

But Petroamazonas, which took over the concession from Occidental Petroleum of the US, has threatened to bring in the military when it begins drilling soon. Although the new constitution calls for consultation and prior consent of the communities on such projects, it appears the government may bypass this requirement. The Sani Isla say they will die fighting to protect their pristine 70,000 ha of rainforest. Blood, it seems, will be spilled again in the fight to conserve the Yasuni.