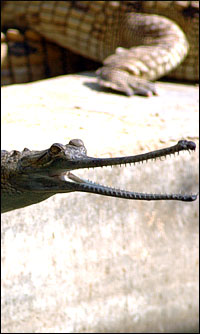 people dependent on rivers couldn’t afford to antogonise the top predator of the water bodies. Accounts of 18th and 19th European travellers to India also carry references to the crocodile.

One of the species mentioned is the gharial— Gavialias gangeticus, a thin-snouted variety found in the Ganga, Mahanadi and Brahmaputra river systems. Named after a pot-like bump (ghara or a pot in many Indian languages), this species is threatened—like other crocodile varieties. Not much has changed for the people dependent on the rivers the only difference is that they don’t feel threatened by the reptiles; they are threatened by conservationists who alienate them from their livelihoods ostensibly to protect the gharial.

But sadly today, the top predator of river systems does not get much press even while its counterpart in forests, the tiger, hogs the headlines. “Scant attention is paid to species other than mammalian mega-fauna like the tiger, elephant and rhino,” rues Rom Whitaker, a crocodile expert associated with the Madras Crocodile Bank Trust, Mamallapuram, Tamil Nadu. Warnings of Whitaker and other experts did lead to the Crocodile Project in 1975. And in 1982, the un’s Food and Agriculture Organization (fao)— one of the project’s funders— proclaimed the project a great success.

But, says Whitaker, “ the situation has reversed and gharials are in serious trouble again. There are less than 200 adult specimens in the wild”.

New Delhi, December 7, 2006 India's gharials are in serious trouble. There are fewer than 200 of these river predators left in the wild. And their deplorable state has remained ignored even by the media, while the tiger hogs the headline -- but the truth is that gharials are 20 times more endangered than tigers.

These facts have been brought to light by a report in Down To Earth, the science and environment fortnightly, which the Centre for Science and Environment (CSE) helps publish.

India initiated its crocodile conservation programme (Project Crocodile) in 1975. And in 1982, writes the magazine, the UN's Food and Agriculture Organization, one of the project's funders, lauded it as one of the most successful conservation programmes in the world. As a result, in 1991, the Union ministry of environment and forests, believing that the project had served its purpose, withdrew the funds for the captive breeding and egg collection programmes.

Only two surveys on gharial numbers have been done since then. And between these two surveys, the population of gharials has plummeted. In 2003, a mere 514 gharials were reported in the country -- almost a 60 per cent drop from the 1,200 found in a 1998 survey. Experts point out that the conservation programme suffered from a lack of information on gharials numbers, and hence, absence of remedial action.

The programme suffered from more than that, says the magazine. A 1983 notification under the Wildlife Protection Act, which placed the gharial in Schedule 1, brought the conservation programme into conflict with livelihoods. Trade in crocodile products (skin and eggs) was banned. Local communities, already smarting after their traditional fishing grounds were taken away to make way for gharial conservation, were incensed. They readily took to lucrative (and illegal) sand mining in regions where the gharial bred -- destroying the work of years.

The ecosystem approach to conservation, according to Down To Earth, instead of a species-oriented approach, is the only answer. The aim should be to consider the entire watershed as one ecosystem, give weightage to all biological resources within that watershed -- and factor the local communities' needs in this entire programme.