Resources requirement for projected production levels, bau and lc, will be many times the current.

In bau, coal requirement for the six sectors will almost quadruple, to about 1.9 billion metric tonnes (MT), by 2030-31. This will be a formidable challenge, with vast environmental and social consequences.

According to the Integrated Energy Policy (iep), domestic production of coal in 2030 is projected to be about 1.5 billion MT. This means in bau India will have to import about 500 million MT of coal to meet the requirements of just the six sectors.

Even in lc, coal requirement will be about 1.5 billion MT in 2030-31—thrice the current level of production and about the same as iep has projected.

India currently mines far more iron ore than domestic industry requires to produce iron and steel. In 2008-09, an estimated 220 million MT of iron ore got mined, of which 60 per cent of iron ore was exported. The study did not account for exports.

There is no difference between iron ore required in the bau and lc scenarios. This is largely because of the low contribution of scrap to steel production in the country in both scenarios.

Bauxite required to make aluminium will increase almost five-fold, reaching 35.4 million MT by 2030-31. There is no difference in bauxite requirement in BAU and LC.

In the LC scenario, however, limestone requirement will be only about 700 million MT. The difference is largely because LC assumes increased use of blending material and a larger proportion of blended cement production.


Projected increase in production in the six sectors will put a severe strain on India’s freshwater resources.

In 2008-09, the six sectors together withdrew about 41,538 million cubic metres (cu m) of freshwater, equivalent to freshwater demand of 1.1 billion people on a daily basis. These industries consumed (lost from the water cycle) 5,641 million cu m freshwater, an amount required for drinking and cooking of more than a billion people on a daily basis. Industries discharged 35,897 million cu m wastewater which in turn polluted more freshwater. Essentially, therefore, the six sectors together are already consuming water equivalent to the domestic water need of the country.

The study shows while freshwater withdrawals will increase at a relatively lower rate, freshwater consumption will increase dramatically. In other words, those downstream will get less water to use. This will severly contest with domestic and agricultural water demand and will spark major conflicts—which has already started to happen in many parts of the country.

Lately, once-through cooling systems have not been allowed for thermal power plants using freshwater and this trend will continue in the future. This change alone is the primary factor that reduces the rate of growth of freshwater withdrawal.


Freshwater consumption will more than triple in the next two decades and reach 18,075 million cu m in 2030-31. This will have social and environmental implications, for this water will be lost.

Water consumption will increase most dramatically in the iron and steel sector, in the cement sector and in the aluminium sector. These three sectors will see a six-fold increase in water consumption.

In lc, freshwater consumption in 2030-31 is about 10 per cent lower than in bau. This is largely because of reduction in power generation from coal-based power plants, assumed in the lc scenario. But so far as the other sectors are concerned, reductions are marginal.


The study estimates land the six sectors occupy in 2008-09, including land leased out to mine coal, bauxite, limestone and iron ore, to be about 0.7 million hectares (ha). But this figure might be a gross underestimation because in past industries have acquired far more than what is required for the production facility. Golf courses and clubs are not uncommon in industry premises.

About 56 per cent of land currently occupied is under mining. The 44 per cent remaining is plant area.


From now up to 2030-31, an estimated one million ha of additional land will be required for mines and to set up plants. 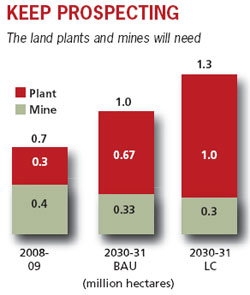 The coal, bauxite, iron ore and limestone required will hog 0.33 million ha. This is similar in magnitude to land leased to mine these minerals since 1947. For example, 185,000 ha of additional land will have to be leased to mine coal, to meet demand by 2030-31. This is 50,000 ha more than all coal mine leases granted in the country so far.


There is a clear trade-off between land and a low-carbon economy. Our estimates show low carbon growth will require 30 per cent more land than in bau.

The major reason land required in lc increases so much is because of enhanced power production capacity from solar energy assumed in lc, as compared to bau. In lc, we assume solar power capacity will increase five-fold to 100,000 MW, as compared to 20,000 MW in bau.

The total additional land required to support growth in these six sectors is 1-1.3 million ha. This figure might seem small, considering India has 328.7 million ha of land. But factor in acquisition and the violation that explodes in people’s lives, factor in diverting deposit-laden forest areas for non-forest use and the impact that has on watersheds, wildlife and people, factor in the way people fight to retain what they believe is their own, and you will know what it means for so much land to be given to industry.