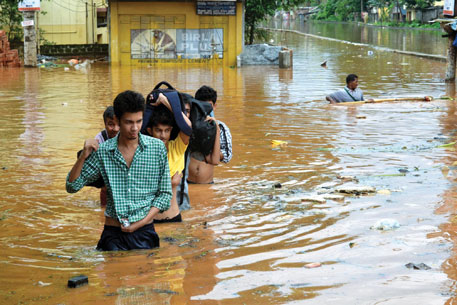 GUWAHATI SEEMS to be under a watery curse. After the devastating flood of June this year, the city was, once again, in the grip of severe flood following heavy rains—135 mm overnight—on September 22. This time the situation was worsened by flood in the Garo Hills of neighbouring Meghalaya, where more than 25 people lost their lives.

Flood water gushing down from the hilly state affected four districts in Assam—Goalpara, Dhubri, Kamrup and Kamrup (metro). Initiating prompt action, the Assam government has announced that a Group of Ministers (GOM) will soon be constituted to study the causes of flood.

As both the states struggled to rescue people from nature’s fury, the governments acknowledged a truth that was long known but perhaps ignored—deforestation in the Garo Hills of Meghalaya is largely responsible for the severity of the recent floods. During a media interaction, Meghalaya Chief Minister Mukul Sangma emphasised that deforestation has become a serious issue and that a detailed study of its impact on the environment was essential.

Forest officials in the state agree. Arpius Sangma, a senior government officer and principal of the Forest Training School, told Down To Earth (DTE) that the percolation rate of water into the soil has come down due to deforestation. “The seepage rate and forest cover act as natural barriers, which reduce the force of water. Stone quarrying and coal mining have also played a role. These activities involve digging the earth, which by default changes the flow of water,” he explains.

Ironically, official data shows an increase in the forest cover in the Garo Hills. According to the State of Forest Report, 2005, green cover in the Hills was 84.59 per cent. The State of Forest Report, 2011, put the figure at 84.62 per cent, an increase by 0.03 per cent. Environment activists disagree. Calling the data incorrect, Samgar Sangma of the Tura-based Centre for Environment Protection and Rural Development says, “Illegal timber logging, coal mining and stone quarrying have gone up several folds in the Garo Hills in the past decade, so how can the forest cover go up?”

According to Sabita Devi, an activist with the non-profit Centre for Environment, Social and Policy Research, the over assessment is because bamboo, orange orchards and areca nut plantations have also been recorded as forests in many areas in the state. But these can’t be considered forests, she adds.

Dealing with annual floods, Assam launched a massive afforestation programme last year with the help of panchayat bodies, civil society groups and activists. State environment and forest minister Rakibul Hussain says that the government has so far distributed and planted over 30 million trees in the state. “The recent flood has taught us a lesson on the importance of forests. The government will take up the afforestation programme more aggressively from now on,” he adds.

State Water Resources Minister Rajib Lochan Pegu says that Assam has sent a formal communication to the Meghalaya chief minister seeking his state’s collaboration in dealing with deforestation. Government officials in the hilly state have lauded the effort, calling it a “good step to maintain the balance of forest cover”.