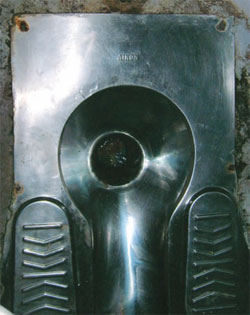 Soon it will be possible to have flush toilets with minimal wastage of water. The environmental engineering department of IIT Kanpur has developed a toilet that will reuse the water that goes into flushing rather than discharging it along with the excreta. This will be possible by not allowing water and solid waste to mix. So recycling water will be easy.

Everyone is talking of sewage economy and dry sanitation. But no one has yet come up with a proper alternative to dry sanitation. The most feasible alternative is not to use fresh water in toilets because it does not matter what kind of water is used for flushing, says Vinod Tare, the brain behind the toilet. “This will bring down fresh-water consumption to a large extent, considering that each flush consumes 5-10 litres of water.”

Indian Railways has approved the design developed by Tare and his students. “We are going to experiment with the toilet first on a Chennai-Thiruvananthapuram train,” says Tare. UNICEF has also approached IIT Kanpur for using its innovation for community toilets. A trial run for this is on at IIT Kanpur and a public launch is likely in early 2008 at Aligarh.

When these toilets are flushed the vortex movement of water cleans the pan surface and pushes the solid waste downwards into a tank at the centre. While the centrifugal force —acting outwards from a centre of rotation—presses water to the surface of the pan, the geometric design of the surface guides it through a circular path downwards towards the separator. At the separator, the water is guided into pipes in the sides that take it to another tank. The separation, says Tare, is close to 99 per cent.

The pipes are fitted with microfilters made of high quality poly vinyl chloride which clean the liquid. The microfilters do not cost more than Rs 100 and last at least a year. Smell traps fitted in pipes and tanks ensure that the toilet does not stink, says Pranveer Satvat, professor, Vellore Institute of Technology, an ex-student of Tare who had worked on the project.

While the collected solid waste is used for making compost, the filtered water is pumped back into the overhead tank. “In community toilets where electricity may not be available, hand pumps can be used to take the water to the overhead tank. It needs to be pumped twice or thrice a day,” says Tare.

After five-six days the tank will be refilled and the waste water—mostly urine, which is rich in nitrogen, potassium and phosphorus—can be evaporated to recover fertilizer. “Thus we solve the problem of discharging waste water,” adds Tare.

Although it is not necessary to make the flushed water pathogen-free since it will not come in contact with humans, the team of engineers is working towards environment-friendly methods of doing so.

The tank containing solid waste will have exit points that could be connected to pipes. The solid waste can be sucked out and transferred into containers or trolleys. In the railways, once the train moves into the yard, pipes could be attached to these exit points and the tanks emptied.

The trolleys will dump the waste into a unit identical to a concrete mixer, which will already have some compost in it. Once it is mixed properly, it is dumped outside and allowed to decompose for sometime on its own. A week would be fine, says Tare. This pre-compost is further added to the fresh load of solid waste and the process repeated. After several cycles, the concentrated compost is processed by worms to make vermicompost.

Tare explains that using faecal matter in vermicomposting is tricky. The compost currently being produced at the IIT campus, he claims, is of good quality and can be bought for Rs 10 a kg. The entire process of taking the solid waste out from the tank, into the trolleys and making the vermicompost will be done automatically.

These toilets are not only environment- friendly but also economic. A basic toilet will not cost more than Rs 5,000. IIT Kanpur is planning to set up six community toilets in Aligarh. The institute will oversee them for the first six months before UNICEF takes over.