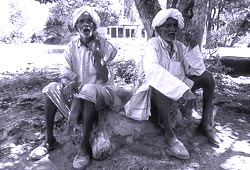 Sheaves of uncut 'bhabbar' (Eulialopsis binata) grass have become a burning issue in Sukhomajri village. Not only have they ignited a raging controversy, they also threaten to spark forest fires -- a common phenomenon in the region during this year's scorching summer. It is ironical that this very grass had scripted the hamlet's success story in happier times.

One of the earliest models of an equity-oriented community irrigation programme, the famous Sukhomajri project in Haryana's Panchkula district is today said to be on the verge of collapse. The reason for this turn of events: interference by the Haryana forest department (fd), which acted upon the advice of Tata Energy Research Institute (teri). They devised a new sharing system for harvesting bhabbar grass and 'khair' (Acacia catechu) trees, slashing the net profit of the village body, Hill Resource Management Society (hrms), by more than half. hrms was formed in 1980 to facilitate the equal distribution of water and strengthen the concept of social fencing.

"It is a dream-turned nightmare," laments Swarn Lata Arya, a scientist at the Central Soil and Water Conservation Research and Training Institute (cswcrti), who conducted a socio-economic evaluation of integrated watershed management programmes in the area. Premature altering of benefit sharing systems has created doubts and discontentment among the stakeholders, she points out adding that it is imperative that the interests of the fd and watershed societies converge for sustainable resource management.
In the 1970s, Sukhomajri -- a small village with a predominantly gujjar population -- was like any other rural area situated in the sub-Himalayan Shivalik foothills: sparsely vegetated, with poor agriculture and high levels of soil erosion and runoff. The Sukhomajri project was launched in the mid-1970s, without a blueprint and out of concern for Sukhna lake near Chandigarh, which was getting silted (see Down To Earth, Vol 2, No 18, February 15, 1994).

A team of soil conservationists from cswcrti, led by P R Mishra, worked with the villagers. After two abortive attempts and initial hostility they built four check dams and rejuvenated the surrounding hill tracts with bhabbar, khair and 'shisham' (Dalbergia sissoo). Water acted as a catalyst and villagers participated in the successful Chakriya Vikas Pranali scheme for soil conservation and efficient use of forest wealth. The tree density in the village forest increased phenomenally -- from just 13 per hectare (ha) to as many as 1,272 per ha in 1992. Availability of irrigation water doubled the productivity of wheat and maize. The cswcrti achieved its objective by checking silt flow into Sukhna lake, recalls its principal scientist, S P Mittal.

Protection of the watershed led to increased grass production, which rose steadily from 40 kilogrammes per ha in 1976 to three tonnes per ha in 1992. The bhabbar grass sold to paper mills earned the villagers Rs 2 lakh per annum.

Sukhomajri is one of the few villages to be taxed on income from natural regeneration. A 1989 amendment in the income tax act brought registered societies such as hrms within its purview. The society pays 15 per cent income tax and a sales tax of eight per cent on sale of bhabbar.
If the Haryana hamlet had embarked on the path to fast-track development nearly three decades back, the derailment has been just as swift. The fd dealt the first blow when it demarcated the 400-ha hill tract between Sukhomajri and Dhamala village in 1995.

Soon the concept of social fencing or self-restraint by the villagers showed signs of breaking down and the two villages became competitors for fodder instead of collaborators (see Down To Earth Vol 7, No 14; December 15, 1998).

"The topography is such that the area cannot be divided otherwise," says district forest officer (dfo), Pinjore, Ved Prakash. "So far as we are concerned, the issue is resolved. It is the people of Sukhomajri who are not accepting the situation," he adds.

The participatory development process in the village received another major setback in 1997-98 when a new sharing arrangement was introduced in the state under the Joint Forest Management (jfm) programme (see flow chart: Benefit sharing systems ). Earlier, the Haryana fd's lower lease rates -- calculated on the basis of the past three years' average price -- left enough margin for substantial profits. But as per the new jfm policy, the sharing ratio was changed to 30:70 between the local communities and the fd, respectively.

The fallout: an alarming 45 per cent dip in the profits of the hrms in the first year (1997-98), which plummeted to more than 60 per cent in 1998-99. Moreover, the people were not allowed to harvest mungri -- or fresh sprouts of bhabbar. This deprived small landholders of green fodder.

The new programme also authorised the fd to be a co-signatory of hrms for operating bank accounts, be it the Kalyan Kosh (village welfare fund) or 'plough back account' (spent on forest development). This meant that even as the state would monitor and control users' activities, the fd would remain unaccountable to them.

It was, however, Ballarpur Paper Mill -- the biggest consumer of bhabbar grass and hrms' chief money-spinner -- that drove the final nail in the coffin. The company simply switched to a technology wherein its raw material requirement changed from bhabbar to poplar wood. Deprived of its main source of earning, today hrms is in the red.


Resentment is brewing in Sukhomajri with the reversal making the villagers see red. Scoffing at the taxes being levied on hrms despite no sale of grass taking place, Hari Kishan, the president of the society, says: "To hell with the government. We are not paying any more taxes and dues." He continues in a combative vein: "We are unable to sell the grass to the paper mills. Nor can we cut trees. But the fd demands its lease share of money. So what can we do?"

Prakash, meanwhile, has little to offer by way of comfort. "We cannot waive the share money. But the village can refuse to harvest the grass, which would then be auctioned," he says.

On the issue of the cutting of khair trees, too, the fd has deferred its decision. This has further dashed the hopes of the village society. "The trees will be felled according to the working plan," points out Prakash. The villagers would then be given their share of 30 per cent profit, he says.

But the villagers' patience is wearing thin. The jfm scheme having foreclosed their options, they are ready to even break the law. " Ab to khair kategi (now khair trees will be cut)," says Kishan holding out the threat of illegal felling.

The other major revenue earner for the village -- sale of water harvested from the dam -- is also drying up. With a generational shift, the people have started digging tubewells to irrigate their field. Four such groundwater guzzlers are already in place.

Groundwater -- considered a personal property resource since the tubewells are on private lands -- is being sold at about Rs 30 per hour of usage through a six-centimetre-wide pipe. This is double the price of water from the damand has led to the cultivation of water-intensive crops such as paddy and sugarcane. As the rules of common property resource use are anyway breaking down, the villagers have decided to harvest groundwater, the biggest capital they had consolidated in the past two decades, says R K Aggarwal of cswcrti.

Criticising the fd's move, Arya says that the hrms is today being used to extract money. Unless the department finds an alternative use for bhabbar , such as in the handicraft and hand-made paper industry, it should not ask the villagers to pay, she avers.

The shift to a community management model can be a success only if people are drawn into social programmes and given control of resources. Immediate and direct economic benefits in the form of fodder and water prove to be attractive incentives for generating momentum in the community participation dynamics, feels Arya. "The main emphasis should be on water. Give the people water and they will find the means to survive," she adds.

"Soon the name of the village will have to be changed from Sukhomajri (happy village) to Dukhomajri (sad village)," says Kishan with a grimace on his wrinkled face. Hopefully, his gloomy prognostication will be proved wrong.