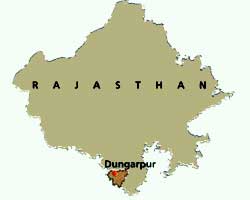 when Bhuna Bhil of Pathara village in Dungarpur ran away from the communal carnage in Gujarat, he faced a dilemma: what would he do back in his village? It had already exhausted all his sources of livelihood.

Known as the 20th century desert, Dungarpur's 68 per cent population has been classified as marginal and unemployed by the District Statistical Profile 2000 of the state government. Every traditional source of livelihood in the village has either degraded or is kept out of people's reach. For example, forests that used to form 60 per cent of the district in 1943 has been reduced to just 12.5 per cent in 1999, according to the State of Forest Report. Local people say this is due to a nexus between timber traders and forest officials. In the early 1990s, a massive tribal uprising against large-scale deforestation forced the government to check commercial felling. With forests unable to sustain livelihoods, villagers began depending more on agriculture and livestock to supplement their income using the common property grazing lands.

The story of Bhuna illustrates the district's swirl of poverty caused by the wind of ecological change. Villagers have been migrating to Gujarat for the last five years as their own land is unsuitable for a second crop. Their second line of defence, livestock, has also fallen prey to the government. There is just not enough grazing land to feed the animals.

Till a few years ago, vast grasslands in the village supported the livestock of this village. The village had clearly defined rules about the use of this common resources. With a rainfed nala flowing nearby, the village was 'reasonably prosperous'. But with the construction of a canal, for which the government took over the commons, the equations changed. The government restricted grazing. "This broke the ecological and socio-economic dynamics of the area," says Devilal Vyas, director of the Mada-based Peoples Education and Development Organisation, a non-governmental organisation working in this area since 1979.

Traditionally, Rajasthan has a large livestock support system: 84 per cent of households in Rajasthan have livestock. And up to 52 per cent depend on the common grazing land. Comparatively, the grazing land available in district is only nine per cent. "This provides the only resource base for animal husbandry holdings which has traditionally characterised the region," says Vyas. Deforestation and loss of common property resources are responsible for Dungarpur's slip into the perpetual cycle of poverty.

Alienation of tribals from forests and indiscriminate cutting of trees by the Vyapar Mandal, formed by the government to 'sustainably' exploit forests, have reduced the total forest cover area to a thin strip of 35 km in south Dungarpur. This is all Dungarpur has today in the name of natural forests.

With poor irrigation facility and an average rainfall of around 700 mm, villagers in Dungarpur now hardly manage a crop a year. This is in stark contrast to the situation more than a century ago when irrigation through traditional methods was practiced on a large-scale. The primary source of irrigation has always been wells (Chahi), though tanks (talabi) have also been a vital component in the system. These water systems still support irrigation albeit in a small way.

During 1995-96, two thirds of the 21.65 per cent of irrigated area were from wells and tanks. The district gazetteer notes the district's rich watershed practices of the past. Talabi or tank had an important role to play in the tribal settings. During the monsoon, the tank would serve to recharge the wells and in bad years, the tank beds would be cultivated (called the Rohan cultivation in Dungarpur). The takeover of these tanks combined with erratic rainfall proved to be the last nail in the coffin of the village economy.