Food - Sangri for the soul

Food - Sangri for the soul 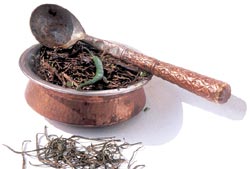 It is quintessentially Rajasthani. But if you have the nose to find the local Marwari shopkeeper, you will find that it has travelled the length and breadth of the country along with this business community. Sangri ki phali (pods of the khejari tree; Prosopis cineraria) grows in Rajasthan but can be found easily in Burra Bazaar of Kolkata, Khari Baoli in Old Delhi or Sahukarpet in Chennai. You can also find it in London and New York, though you will have to be lucky and persistent.

It is an essential part of the regional cuisine, especially during festivities. Sangri is a must in a Rajasthani household on the occasion of sitla ashtami (about one week after the holi festival), when no food is cooked in the house. Sangri is cooked at night and eaten with relish the next day.

The real value of sangri, though, is that it has been the Thar desert's survival food for millennia. Khejari is found widely across the Thar. Sangri is plucked, dried and stored for use round the year. It can be eaten for several days after it has been cooked -- without refrigeration.

These qualities have made sangri the mainstay during drought, when little else is available. And what nutrition it provides in bad times! Sangri is 53 per cent protein, informs K K Chaudhury, director of the Arid Forest Research Institute in Jodhpur.

Rates of sangri in major metros depend on the locality and the clientele -- the wealthy Marwaris have been known to pay obscene rates. Residents of the desert complain that rising rates in the metros have made sangri too expensive for them. In times of drought, sangri sells at about Rs 150 per kilogramme in the desert. In normal times, the rate in city markets in Rajasthan hovers between Rs 50 and Rs 100 per kg. If you go to shops in small towns and villages, you are likely to get lower rates.

While the most popular preparation of sangri is the subzi (see: Recipes), other preparations include pickle and kadi (a kind of curry). A relatively rarer preparation is the panchkuta -- apart from sangri, it includes seeds of kumat (Acacia sengal), fruits of ker (Capparis decidua), kachri (Cucumis supp) and goonda (Cordia mixa). These are crushed, mixed and fried after adding condiments to taste. If you are travelling by train in Rajasthan, you are likely to see people bring out panchkuta from their food potli and eat it along with bajra roti. In pre-auto days, travellers in the desert relied extensively on panchkuta during long drives on carts and camels.

If such ethnic stuff is not quite up your alley, here's a word of caution: the classic preparation of sangri subzi requires a lot of oil and whole red chillies, which can be a dampener for weight watchers and dyspeptics. Desert denizens have a cultural bias for oil and red chillies -- the former not only cooks the food but also helps preserve it and the latter lubricates the mouth, reducing the need for water.