In a first-of-its-kind study in India, the Centre for Science and Environment (CSE) tested 65 food products available in the market for genetically modified (GM) ingredients. To its horror, CSE found GM genes in 32% of the products; almost 80% of them imported 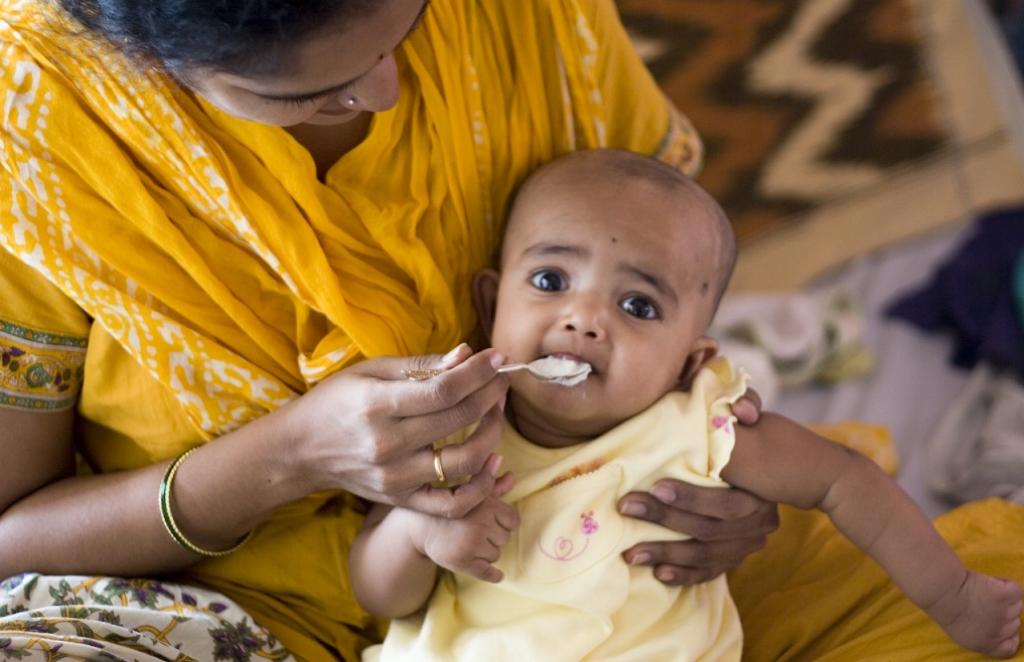 It all started at the weaning stage. Nikki (name changed) was about to turn one when it became evident that she was not gaining weight. After several visits to pediatricians and multiple tests, she was diagnosed with cow milk protein allergy—a disorder found in some 7 per cent of children in the country. The doctors said that Nikki’s immune system considers the protein in cow milk as something that the body has to fight off. This leads to damage of the intestinal mucosa lining for which Nikki is not able to digest most of what she eats and suffers from chronic diarrhoea. They suggested changes in her diet—first eliminate all potentially allergenic foods from her diet, so that the intestinal lining can heal, and then reintroduce one food at a time to monitor possible reactions. Till she outgrows the allergy, doctors recommended a hypoallergenic infant formula, Similac Alimentum, to supplement her nutritional needs.

Manufactured and imported by American healthcare giant Abbott Laboratories, a 400 gram packet of Similac Alimentum costs Rs 2,800 and can meet Nikki’s requirement for about 10 days. But cost is the last thing on the mind of Nikki’s mother, an occupational therapist in east Delhi. Every day, she carefully prepares the formula milk meeting the prescribed calibration standards to ensure that Nikki regains health. Little does she know that all these months she has been feeding her toddler genetically modified (GM) food, whose safety to health has been a matter of concern worldwide.

Researchers with the Centre for Science and Environment (CSE) in Delhi recently found evidence of GM ingredients in Similac Alimentum and another infant formula by Abbott—Similac Isomil, which is meant for the lactose intolerant (Access the full CSE Report). Infants with lactose intolerance cannot digest the sugar found in milk and dairy products and are often prescribed soya milk which is naturally lactose-free. The finding is alarming because the products are being increasingly prescribed by doctors for infants with special health needs.

It is also alarming because in an affidavit submitted to the Supreme Court last year, the Food Safety and Standards Authority of India (FSSAI) said, “The Central government has not notified any regulation under Section 22 of the Food Safety and Standards Act in regard to (sic) the manufacture, distribution, sale and import of genetically modified foods. Hence, genetically modified foods are not allowed in the country and neither can be regulated till such notification is issued.” But the list of such illegal GM products being sold in India does not end here. 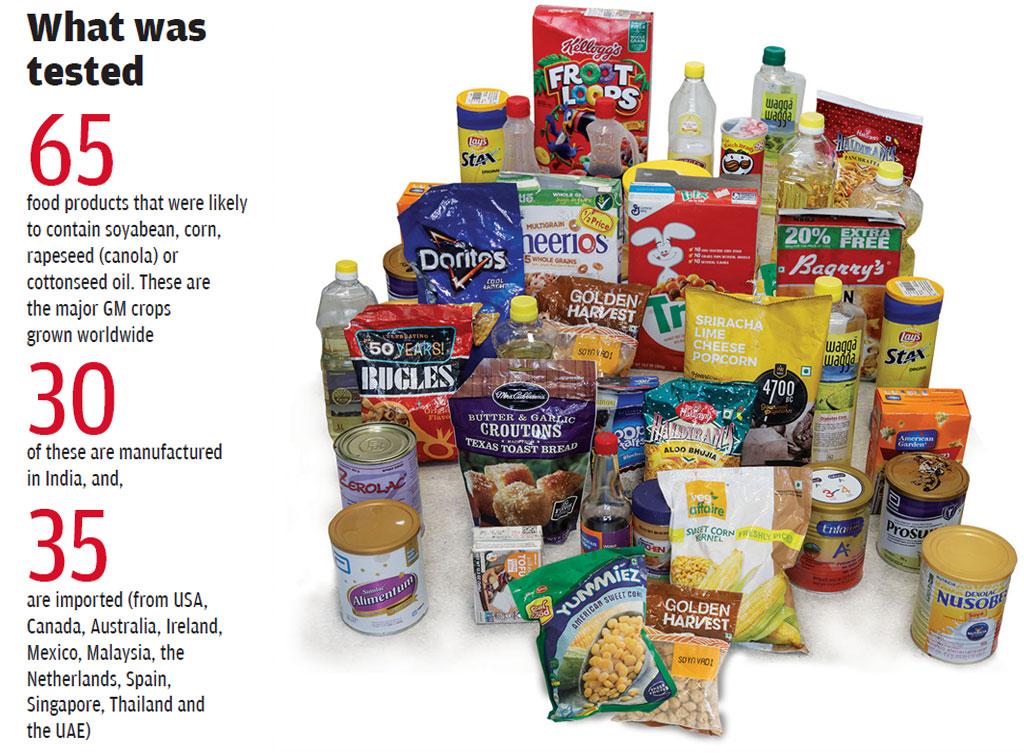 Genetically modified ingredients found in 32% of the 65 products tested

Over the past six months, CSE researchers analysed 65 food products that are likely to contain soyabean, corn, rapeseed (canola) or cottonseed oil in some form or the other. These are the crops whose genetically modified variants are grown on 99 per cent of the area under transgenic food crops in different parts of the world, and are used in everyday food like cooking oils, breakfast cereals, ready-to-cook and ready-to-eat foods, infant formula and protein supplements. Thirty of the food products are manufactured domestically; the remaining imported.

The products were tested at CSE’s state-of-the-art Pollution Monitoring Laboratory (PML), now at Nimli, Alwar, which has been credited for several hard-hitting exposé over the past two decades. To test food products for the presence of genetically modfied ingredients, PML acquired high-end machines and instruments that use the advanced analysis technology of qPCR (quantitative polymerase chain reaction) to amplify GM markers in a food product to detect their presence (see ‘Chasing GM markers’).

“We had a hunch that genetically modified food is finding its way onto our dinner plate in ways more than we know. There have been media reports about illegal GM seeds being available across the country and crops being grown,” says Chandra Bhushan, deputy director general of CSE who led the research. “But we did not know the nature of ingredients used in packaged snacks and oils imported into the country. Since most such products are based on known GM crops like corn, soyabean and rapeseed, we decided to do a reality check,” he adds.

The evidence of genetically modified ingredients was found in 32 per cent of the 65 products tested. Almost 80 per cent of these are imported. All the 16 imported products that CSE found GM-positive were from USA, Canada, the Netherlands, Thailand and the UAE. USA and Canada are the leading countries growing genetically modified crops and producing genetically modified food products. Though the remaining do not allow commercial cultivation of GM crops, their food processing units heavily rely on raw material imported from USA and Canada. Hudson canola oil imported from the UAE says on its label that it is “extracted from Canadian oilseeds”.

To the dismay of CSE researchers, some 17 per cent of the food samples manufactured domestically tested positive for GM. These were samples of refined cottonseed oil, or kapasia tel, sold under the brand names of Tirupati, Ankur, Ginni and Vimal. The sample of crude cottonseed oil also tested GM- positive. This finding clearly indicates that Bt cotton, which is the only genetically modified crop allowed for commercial cultivation in the country since 2002, and now occupies 94 per cent of the country’s cotton farms, has found its way into our food system.

These findings are alarming because some of the products found GM-positive are consumed on a daily basis. Consider cottonseed oil for instance. It is a cheap cooking medium—usually 30-40 per cent cheaper than the other vegetable oils like mustard oil and soyabean oil—and is used voraciously by the packaged food industry for making namkeen snacks like bhujia. It is also a permitted ingredient for vanaspati, which is referred to as poor man’s ghee and is used by the bakery industry for providing stability to the products and improving their shelf life.

Then there are those products that are becoming popular among the urban health conscious. Maya Mishra, a teacher in south Delhi, has recently switched to canola oil and vouches for its goodness. She says the oil is a healthy choice for her husband and son, both suffering from rheumatoid arthritis. While the oil is marketed with claims such as “the ability to reduce the risk of heart diseases”, CSE has found four of the seven canola brands GM-positive. 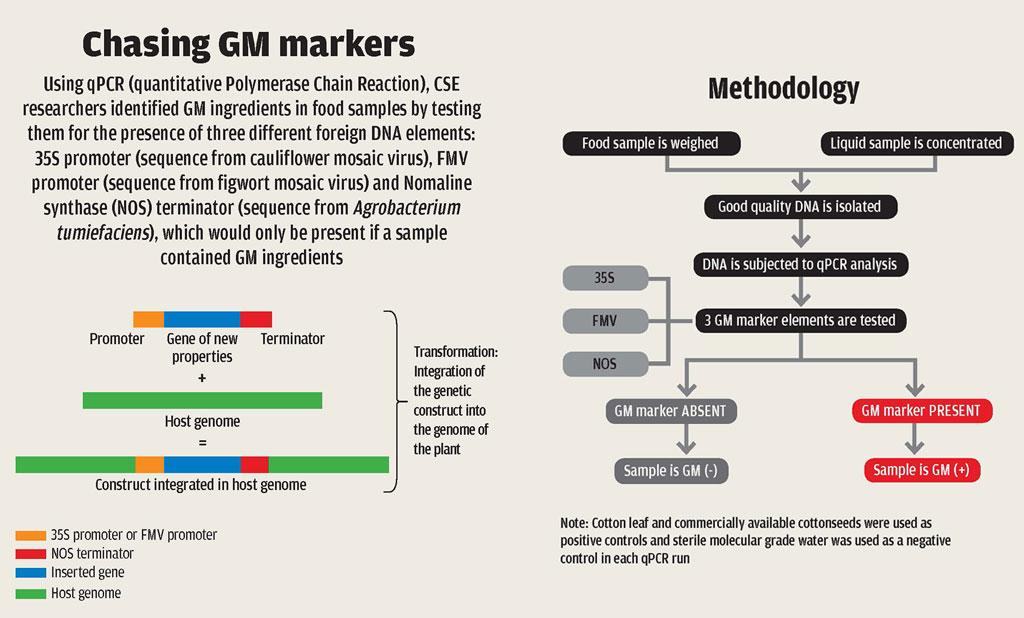 Consumers like Mishra and Nikki’s mother have no way of knowing the truth because labels do not always tell the whole story; some products even take the liberty of making false claims. CSE findings show most samples—74 per cent of the imported products and 96 per cent of the domestic ones—did not mention anything about GM on their labels. When tested, a quarter of them—24 per cent—were found using genetically modified ingredients. Three of the five brands whose labels suggested no use of genetically modified organisms (GMOs) were also found GM-positive. These were Candrop canola oil from Canada, MORI-NU’s Silken tofu from the US and PromPlus sweet whole kernel corn from Thailand. While Candrop claims that the product is “GMO free” and MORI-NU tofu’s claim reads “Non-GMO Project Verified”, the label on PromPlus kernel corn declares “Non-GMO”.

Down To Earth (DTE) contacted some of the industry representatives to check if they had the approval to import genetically modified food. While the All Indian Cottonseed Crushers’ Association (AICCA) refused to comment, Jivo Wellness Pvt Ltd, which claims to be the largest seller of canola oil in India, evaded DTE’s queries and the Olive Tree Trading Pvt Ltd did not respond till the magazine went to press.