Eight women of Thekkekara village in Kerala’s Alleppey district meet twice a week. The get-together is for making coconut oil that can heal rashes and cure skin diseases, and chutney powder.

But do not confuse this coconut oil with the ones available in the market. Unlike the branded oil that is prepared from dried copra, the Thekkekara women use fresh flesh of coconut. For years, each family in the village has been making oil for its own consumption using the traditional method. But with changing times, many have started buying mill-pressed oil.

The eight Thekkekara women also learnt from CPCRI and formed an SHG, Sauhrida, meaning “friendship” in Malayalam. They congregate at 49-year-old Prasanna’s house and grate 40 to 50 coconuts in a day. They then add warm water to the grated flesh and squeeze the mixture with hands. The pulp is separated from the milk. This milk is boiled while being constantly stirred. Impurities (proteins) coagulate and the oil separates. The protein and the remaining pulp are mixed to make the chutney powder. The mixture is dried over fire in a brass alloy pan. Ginger, pepper, salt, asafoetida, curry leaves and black gram are added to it. The dried mixture is then pounded to form a powder. The two processes take not more than two hours.

The oil business does not burn a hole in the pocket. The biggest investment for Sauhrida was the brass alloy pan that cost Rs 16,000. The oil bottles and chutney packets have labels on them. Each label costs Sauhrida one rupee. Prasanna maintains the business records for Sauhrida. She showed that on November 14, 2011, the members used 42 coconuts. At Rs 11 each, the total cost for coconut was Rs 462. Ginger, pepper and other condiments for the chutney powder cost Rs 125. The output was 1.6 litres of oil and 6.2 kg of powder. 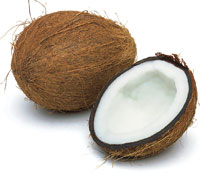 The oil was sold at Rs 300 per litre and the powder at Rs 200 per kg. The total collection was Rs 1,720. This left a little more than Rs 1,100 as profit for the members. The value addition for each coconut is around Rs 13, says P Anitha Kumari, senior scientist at CPCRI, who trained Sauhrida members. The group divides the profits into nine parts instead of eight. The ninth part is put in the bank and can be loaned to any member in times of need. At the end of 2011, Sauhrida had Rs 17,000 in its bank account. Of the eight, seven women’s husbands work in the Gulf.

The profit comes in handy when they send money late, or want to splurge during festive seasons, or in times of medical emergencies. “The market price for the oil and chutney has doubled since we started,” says Sarala, a team member. They have ready buyers in bakeries and supermarkets.