There are many in Kerala who just would not have anything to do with the obsolete official education system. They want change, and that, through people's active participation. They are the ones behind the innovative Vigyanotsavam 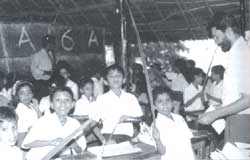 THEY invaded the panchayat offices in several parts of Kerala... teeming crowds of noisy school students demanding, of all things, panchayat maps! This sudden interest in their respective local geographies was sparked off by the Vigyanotsavam - meaning a 'festival of sciences' - conducted by the Kerala Sastra Sahitya Parishad (KSSP). the organisation, announcing the date of its state-wide Vigyanotsava programme, instructed high school students in advance to prepare themselves to draw a map of their local region oil the occasion.

"The sole objective of Vigyanotsavam," says N Jagajeevan, state convener of the programme, "is to enable and inspire the students to ask useful questions, thereby bringing about a in the whole educational system." The idea is to hold out a better model of education as well as the examination system and by demonstrating that people desire these changes, influence a turnaround in the official curriculum of the state through active participation of the people themselves.

Vigyanotsavam is a state-wide annual examination for school-level students conducted by the KSSP in which lakhs of students have been participating since 1990. It is all improved version of the Eureka competitive examination which was began in 1970 by the KSSP as a step towards improving the quality of education.

The programme, as Jagajeevan Points out, is an experiment that tests the possibility of public participation in the field of formal education, a system that seems to have become too formal to reflect the real requirements of society. "Our experience tells us that the public can effectively influence even examinations: all aspect of education which is otherwise considered to be a matter strictly involving just teachers and students," he adds.

Last year's Vigyanotsavam had as many as 1,124 centres and enrolled around six lakh students all over the state, covering nearly every village and municipality of Kerala. It was such a widely observed event that it seemed to be some kind of a statewide festival. It is estimated that about 56.2 lakh students have enrolled in about 12,129 schools throughout Kerala at the beginning of the current academic year.

But many feel the education system has failed miserably and is incapable of evoking a spirit of enquiry in students. The system of examinations in "But We did not open our eyes," says particulai is under fire and has been Santhakumar critically. "the result is singled out for its role in stifling the apparent : a largescall erosion in the students' capacity to think innovatively quality of education. Vigyanotsavanl oil and creatively.

"Students are imprisoned inside the walls of examinations," says Jagajeevan. According to C C Santhakumar, director of Shramik Vidyapeed and former president of KSSP: "Each student under the present system appears to be all island, isolated from society. The root cause of his woes, fears and plight is really the examination. Rather than being involved in the learning process, he is compelled to rely merely oil his memory. We should I calise that apart from his memory, a student has his intelligence, discriminative and creative capacity".

The tedious, dull and unimaginative nature of the examination system had been identified and emphasised in the Radhakrishnan Committee report as carIv as 1948. The report had observed that if significant and effective changes were desired in the country's educational Set LIP, the prevailing examination system had to be revamped. "But we did not open our eyes," says Santhakumar critically. "The result is apparent: a large scale erosion in the quality of education. Vigyanotsavam on the other hand provides the students with a chance for total involvement."

For its successful operation, the programme needs a minimum of at least 100 persons, including teachers and volunteers and a budget of not less than Rs 4,000 to meet the humanpower and financial requirements of each centre. The large organisational network arid its rich experiences in the field have together enabled the KSSP to conduct the Vigyanotsavam successfully.

A time-bound action plan for [he programme, including the questions which the participants are to answer, is decided in a state level workshop involving KSSP, activists and other academic experts. The objective of the Vigyanotsavam is to evaluate effectively the observational, discriminatory and creative skills of the students, using unconventional questioning techniques. "This approach will not tire the students," assures Jagajeevan.

To conduct the Vigyanotsavam successfully, committees are converted at various levels, including the district and panchayat, all over the state. Panchayat committees consisting of social workers, panchayat members, teachers and parents are responsible for carrying out the programme in their respective villages. "As far as the KSSP is concerned, this Vigyanotsavam too is a part of its decades-long effort to evolve a change in the existing educational scenario in the state, in favour of society," maintains Jagajeevan, N K Satyapalan, of the District Institute of Education and Training, Palakkad, felt that public involvement could positively contribute to the programme.

But the question remains as to why examinations should be singled out. The strategy adopted by the KSSP supports the view that the desire to bring about ical change would necessarily mean tackling the toughest issues at the very outset. If parents arid students, who, ale normally isolated from the system, are provided a chance, there will evolve a rapport between the public arid the academics. Today, no such relationship exists, Even though there exist a large number of Parent-Teacher Associations (PTAs), most of them do not function beyond formal frontiers. Vigyanotsavam provides the students a chance to perceive their environment differently. 'the result of which, as Jagajeevan puts it, would be "a change in the attitude and approach adopted by the teaching profession".

However, Vigyanotsovam is not free from criticism. It is being accused of wasting manpower and money. But, "the enthusiasm shown by students and their parents from all over the state proves that Vigyanotsavam is more effective than its critics would like to believe", defends Jagajeevan. "While 1.5 lakh Students enrolled for the programme in 1991, six lakh enrolled this year."

In spite of the KSSP'.s dedicated efforts, the programme has not delivered very fruitful results. But the fact that the state's department of education has tried standing up to these new needs is enough to cheer up Vigyanotsavam's sponsors and participants, It is certain that as an experiment, Vigyanotsavam deserves more time to prove its effectiveness, but it should not end up in the hands of conventional academic pandits, as the literacy movement in Kerala has done in recent years.