For a terra firma

Earth, the cradle of all lifeforms, should not be transformed into a graveyard for want of serious monitoring of soil degradation all over India and the world

By J Sehgal, I P Abrol

For a terra firma 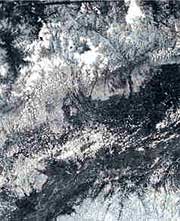 THE various life-support systems and the socioeconomic development of a country depend majorly on the proper use of soil resources. Maintaining the quality of this resource base is therefore a key issue in ensuring sustainability in agriculture and food and nutritional security for the people of the country.

In recent decades the problem of soil degradation has been greatly aggravated due to several factors. It has been estimated that about 50 per cent of the total land area in India is at different stages of degradation due to one reason or the other. A recent study in this regard was undertaken by scientists working with the National Bureau of Soil Survey and Land Use Planning (NBSS&LUP) in Nagpur which indicates the kind degree, extent and severity of different soil degradation problems in the country and their overall impact on agricultural productivity.

Although in the past four decades India has attained self-sufficiency in food grain production the success has not been a bounty of unmixed blessings. There is a serious dilemma as to whether or not this success can ensure sustainability of the production system. In many of the so-called 'green revolution areas'a whole range of second generation problems relating to the deterioration of soil quality environmental pollution and resource use inefficiency are posing serious challenges. In the vast majority of our rainfed areas productivity gains have been limited or insignificant. Declining vegetative cover, subjecting the soil to a whole range of soil degradation problems has assumed a serious proportion of late.

The current population figure of India (917 million) continues to grow by 2.1 per cent per annum and this is expected to stabilise around 1.5 billion by the year 2035. Meeting the food and fibre needs of this spiraling population from a declining resource base is a challenge before the present generation. It is therefore apparent that future increase in food production will come about only if the technologies aimed at increases in production are integrated with technologies involved in protection of its resource base.

A simplified approach called the GLASOD method was developed to tackle this problem by an international working group on soil degradation. Using the modified GLASOD criteria and approach, a soil degradation assessment map of India (on a scale measuring1million) has recently been prepared by the NBSS&LUP. The mapping units are expressive of the degradation status denoted by the kind degree extent and overall severity of soil degradation that has taken place over about four decades.

The study revealed that out of a total geographical area of 329 million (in) ha187in ba of land is suffering from different kinds and degrees of soil degradation problems. Water erosion is one of the major problems which has caused the loss of top soil (140 in-ha) and terrain deformation (13 in ha). Wind erosion is dominant in the western Indian region, causing loss of top soil (10 in ha) and terrain deformation (3.5 in ha). Serious chemical deterioration is observed in15in ha of land which has caused salinisation (11 in ha) and loss of valuable soil nutrient and organic matter (four m ha).

- The degree of soil degradation varies from slight to severe depending on various soil-site characteristics. In case the area under 'slight' severity of problem (which has nominal manifestation where agricultural crops are grown with marginal loss in soil productivity) is excluded the total affected area comes to 145 m ha, representing 45 per cent of the total area.

According to the study factors like over-population harsh climatic conditions rampant deforestation over exploitation and improper use of soil resources not only induced soil-food-population imbalance but also rendered most of the tropical and subtropical ecosystems in the country extremely vulnerable to soil erosion and erosioninduced land degradation. The Vertisols soils in peninsular India (covering 73 in ha) are very erosive because of high runoff (42-50 per cent of total rainfall) poor cover conditions, erosiveslope and permeability.

The red soils (Alfisols, Ultisols and Oxisols covering about another 75 m ha) also suffer largely from water erosion. The lateritic soils suffer severely from rill erosion, losing almost 40 tonne per ha every year in the absence of adequate soil conservation measures adopted either at the Central or the state level. The northeastern states of India suffer from soil degradation problems because of deforestation and shifting cultivation resulting in water erosion and nutrient loss. In the Indo-Gangetic plain of Punjab excessive use - of fertilisers and pesticides have been found to cause pollution of groundwater mainly due to accumulation of nitrates.

The human-induced soil degradation map implies that urgent measures are needed for the periodic monitoring of soil degradation. To some street remote sensing techniques have greatly enhanced our ability to monitor changes in soil qualities and degradation problems.

Although quantitative estimates of the impacts of degradation are limited there are several factors which point to the overall effects. A survey of Sholapur's soils in Maharashtra in 1870and 1945 showed that nearly 17 per centof the land with soil depth of more than 50 cm was converted to shallow soils with a depth of less than 50 cm. Monitoring soil degradation through the loss of top soil based on 56 years of rainfall data, revealed yield losses to the tune of 139 and 51 kg per ha per cm for sorghum and pearl millet respectively.

Agronomic experiments conducted over three successive years by the NBSS staff on shrink-swell soils in a toposequence developed on basalt in sub-humid environments and representing different degrees - of degradation showed significant decline in yield of different crops with increasing degrees of erosion by water slope per cent and decreasing soil depth.

India over its successive Five Year Plan periods made significant investments in creating an irrigation network for nearly 48 in ha of land. Such areas contributing significantly in increasing foodgrain production are now facing serious problems of rise in ground-water table and soil salinisation. Such problems are most common in canal irrigated areas such as the Tungabhadra Irrigation Project in Karnataka the Sharda Sahayak Irrigation command area in Uttar Pradesh the Nagarjunasagar Project command area in Andhra Pradeshand several others.

New cropping systems are being adopted because of the market demand which is resulting in increased replacement of olds table systems without much thought to sustainability and its boons. Increased irrigation facilities in central Punjab motivated farmers to adopt wheat-paddy rotation disregarding the time-tested highly effective system of crop rotation as well as the practice of using green manures. All this was irrespective of paying any attention to the nature of soil types prevalent in central Punjab (the soil type of this region is Ustipsammnents/Ustochreptswhich has a sandy phase).

The wheat-paddy cropping system initially helped in increasing the production of crops in the region but the practice is becoming not only a constraint on sustaining yields, but is also adding to the miseries of southwest Punjab where groundwater has been rising significantly bringing salts to the surface. There is evidence which shows that the capacity of several reservoirs in the area decreased at a much faster rate than what was envisaged at the planning stage.

Till recently little efforts were made to assess and monitor soil degradation on a warfooting. The GLASOD methodology which is simple and comprehensive has been found to provide better and reliable results in mapping the degraded soils of India. In fact the first soil degradation map of India has opened new vistas of monitoring soil degradation with sufficient reliability- It also has the potential to serve as a base for monitoring regional level changes in soil degradation suitably aided by remote sensing techniques.

To assess a broader perspective the impacts of soil degradation arenot just limited to particular national boundaries; they are contributing to serious global changes adversely affecting humankind. This would warrant that nations and organisations should initiate efforts to assess and combat soil degradation at national and international levels to ensure a better future for the human civilisation.