Force the fish up

The annual Maund festival of the Aglar valley in Uttaranchal is both pure revelry and impure fun, says manisha viren singh

Force the fish up 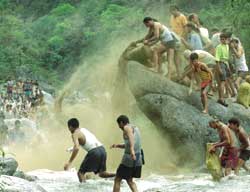 At Suman Kyari, some 10 kilometre (km) downhill from Kempty Falls near Dehradun district, Uttaranchal, Roshan Rawat potters around his attic dusting old fishing nets. Rawat is not much of an angler; he is a dhaba owner actually. But Rawat must hone his fishing skills once a year to participate in the fun festival, Maund.

On June 28, every year, thousands of villagers from Uttaranchal's Tehri and Dehradun districts trek down to the Aglar valley to compete for the plumpest catch in the river Yamuna's gurgling waters. The villagers believe that the festival was started around a century back by the then ruler of Tehri. But they have very little idea that Maund could actually precipitate an ecological crisis in the region.

Celebrated by seven pattis (a bunch of villages), Maund involves sacks full of of an eponymous powder. Maund powder is made of crushed Timru (Zanthoxylum armatum, a plant found abundantly in the Himalaya ) barks. The host patti has to arrange for 8-9 tonnes of this powder which is thrown into Yamuna waters after the customary pooja. Maund, which has a chemical composition of methyl-n-nonyl ketone, linalool, linalyal acetate, tricosane and unchactheized sesquiterpenes, forms a muddy impenetrable layer over the water surface. The layer depletes the river's dissolved oxygen reserves and suffocates fish and all other aquatic creatures. According to D P Uniyal of the Zoological Survey of India, Dehradun, "The powder reduces the oxygen carrying capacity of blood vessels of aquatic creatures and there is a corresponding increase in co2 levels in their bodies. Fish gills do not get the required oxygen, affecting their thermodynamics and metabolic activities."

The villagers concur. But they have their own reasons for using the powder. Says one of them, "Once the powder is thrown into the river, the fish are not able to breathe inside deep water and so they come up right up to the water surface." Once this happens, enthusiasts spread over an eight km stretch spanning Maund Kot to Bunder Kot. They thrash the water with sticks and shove the half-conscious fish in basket-shaped nets, pattari, or into cloth pockets.

The catch comprises an eclectic lot including endangered species such as the golden mahseer (Tor putitora). The merry villagers also snare freshwater eels and catfish. Though the powder is washed out after a few hours, its toll lasts for an entire season. Says Uniyal, "The festival coincides with the breeding cycle of fish. By the second week of June, shoals of them leave big rivers and move upstream to spawn. Hill-streams that branch out from the Yamuna in the Aglar valley are good breeding grounds because they have abundance of dissolved oxygen and large stocks of food. These streams are also safe. The fish stay upstream till September before journeying back. The juvenile ones, however, stay on for another year." "Killing a gravid fish also means death for 2,000-3,000 yet-to-be-born creatures," he laments.

Villagers in Aglar feel the pinch already, but they cannot ascribe any reason to the damage as yet. Says Kariya Singh Rawat, the area's star fisherman, "The fish were much bigger and heavier earlier". Uniyal is more forthright: "A catch of a mahseer weighing 20 kg was quite common till a few years back. But the villagers have reported no fish of this size of late. This clearly shows the pressure on the species." The scientist fears that Maund revelries have jeopardised a total of 18 fish species, the most common of which are the hill trout (Barilius), snow trout (Schizothorax), freshwater eel (Mastacemblus) and stone sucker (Glyopthorax).

The merry-making also threatens other creatures including butterfly larva, snakes, tadpoles and many other small microorganisms including phytoplankton and algae that are food to fish and insects. Though Maund's effects are limited to the Yamuna's 10 km catchment area in the Aglar valley, the festival is bound to have long-term impacts on the river's ecology. Says A L Ramanathan, associate professor at the school of environment Sciences, Jawaharlal Nehru University, New Delhi, "Mixing alkaloid powder in the river disturbs its natural flow. In the long run, it could reduce population of many creatures and trigger other ecological changes".

Other scientists say the effects are not likely to be confined to the aquatic cycle. Maund activities could also threaten many avian species that rely on the river for sustenance. The Himalayan region is redolent with diverse diverse avian species: the babbler, bulbul, myna, khaleej pheasant, red jungle fowl, grey hornbill, kingfisher, lapwing and the bee-eater. Scientists apprehend that as Aglar stretch of the Yamuna runs dry of food these birds might migrate or perish. Already kingfishers have become very difficult to sight in the region.


It's time we educate the villagers about the harm done by their annual festival," says Ramanthan. Unniyal agrees: "Scientists and environmentalists should be sensitive to the culture of the local people. They should try and make them realise the value of Aglar valley's rich biodiversity.

So what are the tangible solutions? Some suggest shifting the timing of the festival so that it does not clash with fish breeding cycle. Others say that the festival should be celebrated in a smaller stretch. Yet others call for use of artificial pools. But none of these suggestions have been implemented as yet. Meanwhile, the Aglar valley's ecology gets even more jeopardised.