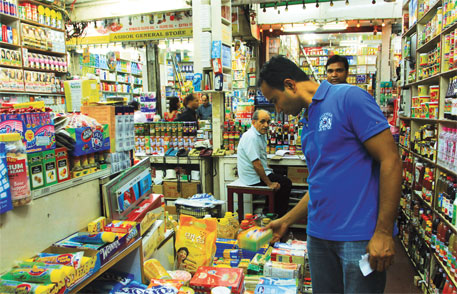 The colours, flavours and aroma of what India is eating these days have changed—and dramatically in some ways. Imported food items, both fresh and processed, are filling shopping bags in cities and towns as the global food trade zeroes in on India as a prime market. Many items of regular, if not daily, consumption, from Washington apples to the Vietnamese basa fish, have insinuated themselves into the palate of Indians, most of whom appear to be unaware of their growing dependence on foreign food.

Almost unnoticed, imported foods have been proliferating and growing in volume, their rising graph reflecting growth of the Indian economy and emergence of a new consuming class. The class that the trade likes to describe as the “modern Indian consumer”: a trendy, health conscious eater aware of global consumption patterns and ready to splurge that extra bit on foods seen as nutritious and of better quality.

While shops in affluent enclaves might have a profusion of imported foodstuffs from specialty cheeses to canned meats, the neighbourhood kirana store, too, is giving increasing shelf space to a number of imported items such as almonds and confectionery. In fact, the most substantive food imports are items of mass consumption: pulses and edible oils. Imports of these items are vital to keep Indian kitchens running as demand far outstrips domestic production. In case of edible oils, import dependence has soared from just about 3 per cent in 1992-93 to 50 per cent now, although India is one of the largest oilseeds producers in the world. 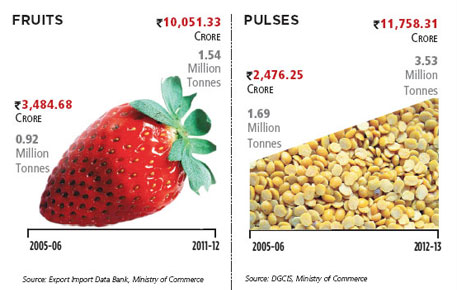 All this is a huge source of concern for several reasons, warns Jayati Ghosh, professor of economics at Delhi’s Jawa - harlal Nehru University. “India is potentially a ‘big country’ in world trade for all of its food import items, that is to say, it affects global prices by its entry/exit. We are already far too affected by global prices that have been extremely volatile, often for reasons unrelated to actual demand and supply but because of financial speculation, etc. To expose the country to import vulnerability is, therefore, insane and even criminal.” 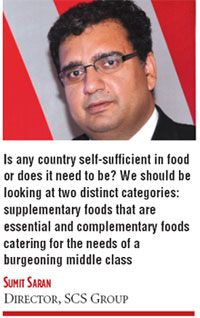 But is any country self-sufficient in food or does it need to be, asks Sumit Saran, director of SCS Group, an agri business consulting firm that represents several US crop associations, such as the Pear Bureau Northwest and the US Apple Export Council, in the Indian subcontinent. “We should be looking at two distinct categories, that of supplementary and complementary foods. In the first category are those that India needs to import to meet the demands of its one billion plus population. Products like cereals, pulses, edible oil and sugar fall in this category. Complementary foods are those that are imported to cater to the demands of a burgeoning Indian middle class and its aspirations to be a part of the global consuming family.”

And what is this class eating? Tons of pasta, exotic fruits from a diverse range of countries, some fancy vegetables, premium cheeses and dairy products, among others. According to various trade reports, the market for imported complementary foods is estimated to be close to $1.5 billion. Fresh fruits, dry fruits and nuts, olive oil and processed foods, like confectionery items, beverages and pasta products, etc., are the fastest growing items in this category. 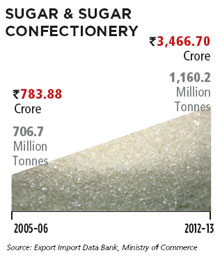 There appears to be a certain inevitability to food imports, given the size of the Indian market and its projected growth. Its $330 billion food market is expected to expand to $900 billion by 2020 while the current market for processed foods of $40 billion will increase to $300 billion in the next seven years. These are the figures that have left the global food industry salivating. The projection is that India, which is now the world’s 12th largest food market, will zoom ahead to the fifth place by 2025.

In the nineties, when India was forced to lift its quantitative restrictions on imports of most food items, these products were mostly for the well-heeled elite class with high incomes. Retailers of these products were few and availability was erratic. Now, with more widespread affluence and a sizable chunk of professionals boasting disposable income in a comparatively young consuming population, the market dynamics have changed dramatically. Today’s consumers are demanding similar diets and products that are available in London, Toronto or Sydney—and getting those as the suppliers, the medium and the market make it so much easier. 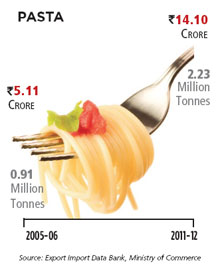 While imports of spices, dried fruits and nuts are skyrocketing, products like ginger and garlic are making a dramatic appearance on the import charts. Nuts, in particular, are big ticket item since India produces insignificant quantities of pistachios, almonds and cashews to meet the burgeoning demand. Raw cashew imports between April 2012 and February 2013 accounted for a steep outgo of Rs 5,085 crore.

The trick of the trade is to look for a health angle and make it the selling poi - nt. One reason imported fruits have become popular in a price-conscious market like India is that these are reputed to be more wholesome, whereas Indian vegetables and fruits are known to be sprayed heavily with pesticides that lead to health problems. Tarun Arora of Mumbai-based IG International, a leading importer of fruits and vegetables, says, “The niche is an entire set of people who are health conscious and it cuts across class and other barriers. It has helped our company turnover to increase by 20 per cent annually in the last five years.”

For instance, Kiwi, which was an unknown fruit to most Indians, is now selling well even at Rs 200/kg merely because it is reputed to fight dengue. The nutritional pitch has been most successful with imported apples, which have broken the seasonality barrier. Apples, imported from China, Chile, US, New Zealand, Italy and Germany are available all the year round on practically every street of Indian metros and bigger cities.

Thanks to the health benefits it is supposed to confer, consumers across the country are happily paying Rs 10-20 more per kg for the imported fruit.

But although the import trade and consultants are pushing the health and nutrition angle, there are questions about the quality of foodstuffs that come into the country. For one, many of the processed foods and items carry labels showing date of packaging and expiry affixed by the importing agency and not that set by the manufacturer. For many a consumer this undermines the credibility and quality of the product, and retailers admit there is customer reluctance and suspicion about such labelling. 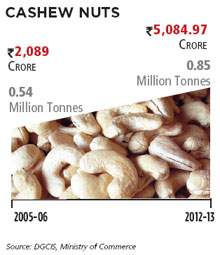 Who monitors the quality of imported foodstuff? All such imports come under the scrutiny of the Food Safety and Standards Authority of India (FSSAI). Its rules and regulations under the Food Safety and Standards Act of 2006 are detailed and, according to trade sources, onerous. But, oddly, since September 2010, FSSAI is regulating imports made only through Delhi, Chennai, Mumbai and Kolkata. Prior to this, foodstuff required a certification from the port health authorities that the product conformed to the standards and regulations of the Prevention of Food Adulteration Act (PFA) of 1954 and its rules of 1955, which were designed to keep out impure, unsafe and fraudulently- labelled foods. However, as the trade itself concedes, certification is, even today, based mostly on visual inspection and records of past imports as most ports have very limited testing facilities.

This leaves a loophole for the food trade. 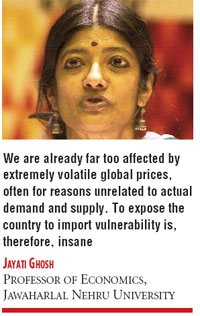 FSSAI’s Vinod Kotwal, director CODEX, told Down To Earth that with the quantity and value of food imports increasing over the years, the authority is facing some tough challenges as its functioning gets more and more circumscribed (see ‘Who is manning the gates’).

The other shortcoming is that no standards have been prescribed for fresh fruits and vegetables. With exports having been seen for long as the priority for the economy, the focus has been on meeting the standards abroad and not vice versa. As a result, imports appear to have found the entry barriers not insurmountable, specially since the average consumer typically assumes that all that comes from abroad is of superior quality.

Several factors make it appear that food revolution will be irreversible. Right now it involves just the creamy layer of society, the 250 million affluent Indians, who make up the global consuming class. However, the remaining 900 million will be added soon, declares an optimistic food consultant. For one, there is the accelerated urbanisation and the resulting demand for processed, packaged, branded and value-added food and beverage products; more cosmopolitan tastes and a new breed of working women and young mothers who have neither the time nor inclination to cook.

“Most high-value imported foods are sold in metros and Tier-I cities,” points out Saran. “But some products like apples that are comparatively less temperature-sensitive and are able to maintain crispness even in ambient temperatures for five to seven days are making it to Tier-II and Tier-III cities.” His contention is that there are no rich or poor cities. “Each city, each area, has its share of rich and poor. So there always are discerning Indian consumers, who can afford imported produce and are willing to pay a higher price for better quality.” 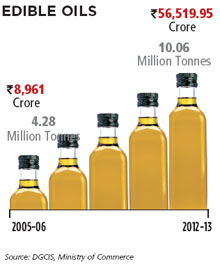 The rule of thumb with fruit consumption across the globe is that “fruits are produced seasonally but consumed all the year round” and India is no longer an exception. The irony is that even Mother Dairy, a fully owned subsidiary of the National Dairy Developm ent Board, is offering imported fruits at its Safal outlets. Mother Dairy Fruit & Vegetable (MDFV) was set up to provide a market for Indian farmers through the cooperative framework and help them get the right price for their produce.

But Pradipta Sahoo, horticulture business head at MDFV, sees no conflict of interest in Safal hawking imported apples, pears, kiwi and other such exotica. “Please note that we are in a modern retail business running 400 booths/stores. Therefore, we need to provide consumers the choice of assortment of fruits.” Such compulsions mean imported fruits, mostly apples, are on sale to take advantage of the seasonal window advantage, which products from the US, New Zealand, China and Chile offer.

Besides, MDFV does not have enough storage facility for home-grown apples.

But there can be serious repercussions on domestic growers as India becomes one of the top 20 fruit importe rs in the world. Take for instance what happened to apples in 2012. While dom estic production was 2.2 million tonnes, consumption was 1.9 million tonnes inclusive of imports of 188,071 tonnes. With a retail market size of $4.9 billion, it is little wonder that agri-marketing companies representing foreign corporations are stepping up their promotions.