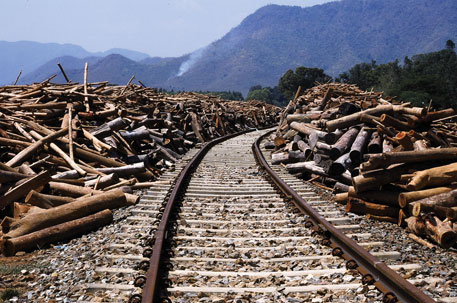 Kari Papa Rao of Chodavaram village in Telangana’sKhammam district has been growing eucalyptus since 2001. After three successful harvests, Rao is preparing to plant the trees for the fourth time on his 28 hectare (ha) farmland. Once in every four years, he fells the trees that earn him more than Rs 50 lakh.

Earlier, Rao used to grow chilli. “It fetched me a good profit but required a lot of investment and labour. Its market price also fluctuates significantly. “Eucalyptus has an assured market. Besides, it does not need constant care like other crops,” he says with a smile.

Rao buys hybrid variety of eucalyptus saplings from a nursery in Bhadrachalam, set up by ITC Ltd, the second largest paper manufacturer in the country, and sells the pulpwood to the company. Rao is one of the 80,000 farmers in the country growing pulpwood for ITC. Between 1992 and 2013, the company distributed 788 million saplings and promoted eucalyptus plantations on 168,000 ha in undivided Andhra Pradesh, Tamil Nadu, Maharashtra, Chhattisgarh, Odisha, Kerala, Uttar Pradesh, Madhya Pradesh, Punjab and Haryana. ITC’sBhadrachalam unit, the biggest wood-based plant in the country, sources 95 per cent of its raw material from these plantations. Other wood-based paper mill giants, such as JK Paper Ltd, also source most of their raw material from plantations on farms.

Yet, it is surprising that the paper industry is adamant on reverting to its old practice of sourcing wood from forests and is demanding forestland from the government.

Till the 1980s, wood-based paper industry, which rolls out high-quality paper, sourced most of its raw material from forests and was responsible for large-scale forest loss. 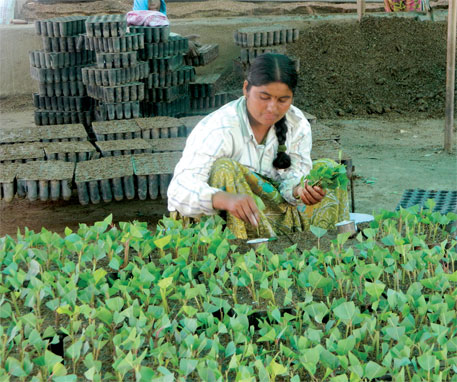 In 1988, the Centre introduced the National Forest Policy, which restricted commercial plantations in forests and asked industries to source wood from farmers instead. The paper industry with its eye on cheap wood from captive forests opposed the policy, claiming that farm forestry would not be sufficient to meet its needs. However, in the absence of choice, the industry turned to farmers for wood. The movement of farm forestry began to pick up towards the late 1990s.

This heralded a remarkable change in the way wood is sourced by the paper industry. Though the industry predicted in the early 2000s that a “wood drought” was imminent, its investment in farm forestry seems to have paid off. According to a recent report on the pulp and paper industry by Delhi non-profit Centre for Science and Environment (CSE), in 2001, the industry produced 4.8 million tonnes (MT) of pulp and paper. Of this, only 1.7 MT was made from 3.4 MT of wood and bamboo. The rest was made from agro-waste and waste paper. In 2011, nearly 3.1 MT of the total 10.1 MT of paper was produced from 6.5 MT of wood and bamboo.

“This two-fold increase in consumption of wood has been possible as these mills had opted to take the farm forestry route,” states the report, which studied 12 large wood-based integrated mills. It found that 61 per cent of the wood consumed by these mills was sourced from farm forests in 2013. The contribution of farm forestry was just 23 per cent in 2004 (see ‘Sustainable sourcing’).

The industry’s demand for wood will increase in the days to come. Though the percentage of wood-based paper has come down to 31 per cent in 2011 from 84 per cent in the 1970s (see ‘New writing on the wall’ on p38), the actual consumption of wood has increased because of increasing paper production. By 2021, the wood-based paper production is expected to double to 6.1 MT from its 2011 level, CSE estimates.

“Sourcing wood from farm forestry is a win-win situation for both wood-starved mills and farmers who want a steady source of income,” says K SrinivasaRao, ITC’s field manager in Bhadrachalam.

The industry has put in a lot of research to make farm forestry work. Initially, not many farmers were willing to grow eucalyptus because of high gestation period, poor yield and low market price. They had to wait seven years for harvesting only six tonnes of pulpwood from a hectare. This would sell for just Rs 75 a tonne. Now farmers like Rao harvest nearly 80 tonnes of pulpwood from a hectare in four years, which they sell at around Rs 3,500 per tonne.

“Our company researched from 1982 to 1989 to develop high-yielding seeds,” says H D Kulkarni, ITC’s vice-president in-charge of plantations. “We developed 107 high-yielding, drought-tolerant and disease-resistant eucalyptus varieties, 12 varieties of subabul and 15 varieties of casuarina suitable for different soils.” ITC also set up two nurseries and gene banks at Bhadrachalam. “Productivity has improved from traditional three to six tonnes per ha to an average 80 tonnes per ha. And compared to 40-50 per cent survival rate of normal seed route plants, the hybrids have 95 per cent survival rate,” says Kulkarni.

To promote plantations, ITC rolled out two programmes. Under the first one, big farmers like Rao buy plants from the company at full cost, which is Rs 5 per plant. Under the second programme, the company promotes social forestry by roping in backward communities. Each farmer pays Rs 1 per plant to the company and deposits the remaining Rs 4 in a group fund, from which he or she can avail loans.

Like ITC, a few mills such as JK Paper Ltd and West Coast Paper Mills Ltd have taken to farm forestry. JK Paper today sources more than 85 per cent of wood for its unit in Rayagada district in Odisha through farm forestry. Before 1994, the company depended on government forests in Odisha and Gujarat for bamboo. JK Papers began its farm forestry programme in 1991. The mill provides high-yield planting material and free technical advice with the assurance of buying back the wood from farmers. To minimise transport costs, the company’s farm forestry focuses on areas within 200 km of its mills. JK Paper started a purchase-at-gate scheme in 2009, enabling farmers to deliver wood and be paid at the company’s gate. It has a network of 10 wood collection centres for farmers who live within 75-200 km from the plant. Since its inception, the programme has promoted plantations in 110,000 ha of farmland covering 20 districts in four states.

In 2013, the success story hit a roadblock which prompted the paper industry to import wood. “Despite extensive farm forestry initiatives, we faced shortage in 2013. As a result, we had to import more than 70,000 tonnes of wood for the first time,” says DharmendraDaukia, general manager, raw materials, JK Paper.

Daukia attributes the shortage to three problems. In 2008-09, the market price of wood crashed to Rs 1,500 per tonne as paper mills hit by the economic recession did not procure wood. That year, the deadly gall disease hit eucalyptus plantations across the country. The government offered a high minimum support price for food crops. “In several areas farmers went to the extent of uprooting eucalyptus trees to plant other crops,” he adds.

The 2013 shortage has once again prompted paper mills to say that farm forestry is not a reliable option. Kulkarni says the paper industry needs an additional 2.5 million ha by 2025 to meet its future wood demand. “Availability of land and transportation costs are also major hurdles in promoting farm forestry. Land may not always be available near paper mills or farmers living nearby may not be willing to grow pulpwood,” he adds.

Another reason the industry is not willing to invest in farm forestry is the fear of wood-poaching. Other wood-intensive industries, such as plywood and pole, have started buying wood from farms promoted by paper mills instead of starting their own initiatives. Even competition for wood from within the paper industry—from mills that do not invest in farm forestry­—is working against farm forestry. 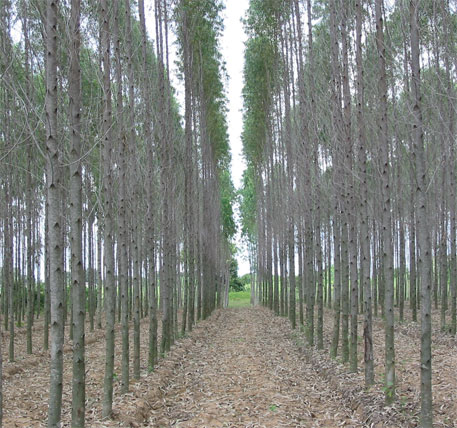 This raw material shortage is only short-lived, say CSE researchers. With the industry stating that the current price of wood is at an all-time high of Rs 5,000, it is likely that more farmers will come into the fold of farm forestry. Equal engagement of all mills in farm forestry will work towards addressing unavailability issues, they say.

There is another incentive for large mills to turn to farm forestry. The CSE report suggests that the wood-based paper mills which have invested in farm forestry have registered better growth than the ones that haven’t. ITC has remained the largest integrated paper mill in the country since 2000. Its capacity has increased at the rate of 12.6 per cent per annum. The Rayagada unit of JK Paper has registered 6.8 per cent annual growth since 1995.

Forests are not for paper

Despite the advantages of farm forestry, the paper industry is reluctant to give up its most contentious demand: access to degraded forests and government wastelands.

At the same time, it has triggered a tussle between those who want forestland and those who oppose the move. A working group constituted by the Planning Commission to suggest measures to “accelerate” the growth of the paper industry during the 12th Five-Year Plan recommended leasing about 2.5 million ha of forestland to the paper industry. The Ministry of Environment, Forest and Climate Change opposes the idea of handing over forestland for comme- rcial purpose (see ‘Pulp friction’).

“Forestlands are not meant for industry to draw commercial benefits,” says RekhaPai, inspector general of forests. “Industries are welcome to explore other options like farm or agroforestry.”

India’s new Agroforestry Policy, finalised in April this year, is a step in the right direction. The policy is aimed at removing restrictive legal provisions for harvesting and transportation of trees planted on farmland. The policy also aims at providing quality planting material, infrastructure and support price mechanisms. These measures will give farmers the incentive to adopt agroforestry and grow wood on their farms.

“We cannot keep asking for natural forests. Agroforestry is the only hope for wood and food security in the country,” says ChetanAgarwal, a Gurgaon-based forestry consultant.

With inputs from Kumar Sambhav Shrivastava