Private cultivation of sandalwood is catching up in India, but it will be a long wait for farmers to reap benefits and for India to regain its supremacy in the global sandalwood trade 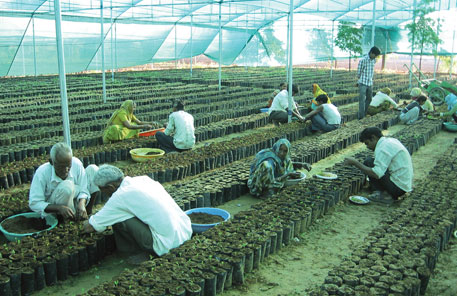 FIVE YEARS ago, farmer K C Dinesh planted 2,500 sandalwood saplings on four hectares (ha) of his land in Karnataka’s Chitradurga district. In 10 years, he expects to earn Rs 12-Rs 15 crore from his crop. “Farmers from the entire district are visiting my farm. Everybody wants to plant sandalwood as it is highly profitable and needs least maintenance,” he says.

Although India has long been known for its sandalwood (Santalum album), it is only in the past decade that farmers have shown interest in growing the plant in their backyard. Until 2000, sandalwood was largely confined to the forests of Karnataka, Tamil Nadu and Kerala and plantations of these state governments. There was no cultivation on private agricultural land in the rest of the country. But a policy change in Karnataka and Tamil Nadu in 2001 and 2002 respectively allowed people to grow sandalwood. This inspired other states.

In the past four years, 2,800 ha of agricultural land came under sandalwood cultivation in Gujarat, Andhra Pradesh, Madhya Pradesh, Maharashtra and Uttarakhand, apart from Karnataka and Tamil Nadu. The figure is rising by approximately 600 ha per year, according to an estimate by the Institute of Wood Science and Technology (IWST), Bengaluru, a pioneering institute for sandalwood research. This will help revive the country’s lost glory in the sandalwood trade.

From royal tree to people's tree

India was once a world leader in sandalwood production. In the 1960s, it produced almost 4,000 tonnes of sandalwood. This is significant given the international demand—6,000-7,000 tonnes per annum (see ‘Sandalwood supply at stake globally’ on p24). But smuggling became rampant due to the wood’s high value and demand in the market. Thefts gradually decimated the sandalwood forests.

A 1792 edict by Tipu Sultan, the ruler of the kingdom of Mysore, added to the problem. Under the edict sandalwood was declared a royal tree. Karnataka and Tamil Nadu later adopted the edict and kept sandalwood under government control. But this did more harm than good as many legal obligations were imposed on sandalwood cultivation. “Having a sandalwood tree in your backyard or farm was more of a hassle than benefit. You had no rights of ownership, but if your tree got stolen you were in trouble with the authorities. So people started distancing themselves from the tree,” explains IWST head V Ramakantha.

These factors affected the country’s sandalwood production, which started going downhill since the 1990s. According to official data, India currently produces about 400 tonnes of sandalwood annually. There is an end of monopoly of Karnataka and Tamil Nadu over the valuable wood, and other states are keen to take up cultivation. Ramakantha says cultivation on private land is crucial for reviving India’s vibrant sandalwood trade. “Apart from raising national production, private cultivation will benefit farmers as sandalwood is the most economically rewarding crop in the world,” Ramakantha says. In recent years, the Karnataka government has made further provisions to encourage sandalwood cultivation. In 2009, the state simplified its laws so that instead of monopoly procurement by the forest department, growers could sell their wood directly to semi-government corporations such as Karnataka State Handicrafts Development Corporation (KSHDC) and Karnataka Soaps and Detergents Limited (KSDL). Recently, the government also announced a 75 per cent subsidy on sandalwood cultivation. 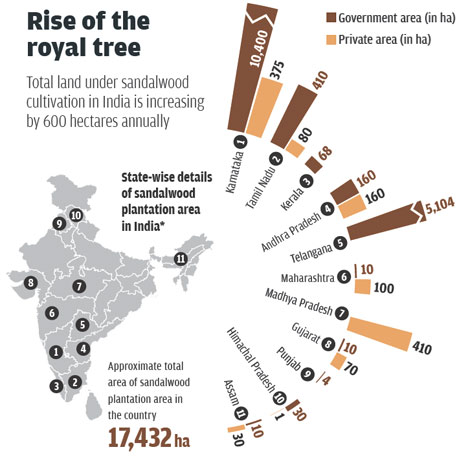 The benefits of the crop to a producer are stupendous. After the age of seven to eight years, the heartwood of a sandalwood tree grows by 1 kg every year, and its market price is between Rs 3,000 and Rs 6,000 per kg. It is the only wood in the world to be sold by weight. According to IWST estimates, the cost of sandalwood cultivation per hectare is about Rs 30 lakh for the entire crop cycle, but the returns vary from Rs 1.2 crore to Rs 1.5 crore. IWST recommends a 15-year harvest cycle of sandalwood for maximum benefit.

Since 2001, IWST has been working steadily to devise cultivation protocols for the crop. IWST has developed protocols for uniform germination, disease control and tissue culture propagation. It has also identified companion crops or hosts of sandalwood. Being a hemiparasite, sandalwood requires macronutrients from the roots of other plants. Now, the institute has a complete set of instructions for farmers wanting to cultivate sandalwood. It says that around 350 sandalwood seedlings should be planted per acre (0.4 ha) with 150 host plants. Mimosa pudica, commonly known as touch-me-not, has been identified as the best host for the initial development of the seedling, while pigeon-pea and fruits like sapodilla, papaya and pomegranate make good hosts at a later stage.

“Unlike monoculture plantations where the waiting period yields no results at all, in sandalwood, a farmer can get an income from the host plants for seven to eight years, after which they wither and a pure sandalwood plantation remains,” Ramakantha explains. IWST proposes organic management of the crop, as it is not found to respond well to chemical inputs. This is an added benefit as the soil is protected and cultivation costs are low. The institute also provides seedlings to farmers at a nominal cost of Rs 40 per plant.

Despite a growth in cultivation, it will be difficult for India to regain its leadership position in global sandalwood trade anytime soon. In fact, growers are unable to meet the domestic demand.

“There is a big demand for pure sandalwood incense sticks that we produce,” says Keshav Murthy, managing director at KSDL, the largest manufacturer of sandalwood oil and its products in India. “But due to the shortfall in production, their space is taken up by imported raw sticks from Vietnam.”

The main reason for this shortfall is that India’s sandalwood plantations are still young and the waiting period is long.

G S Kariappa, managing director of KSHDC, says that although restrictions on sale in the state were lifted in 2009, very few farmers are approaching his organisation for selling their produce because they do not have mature wood to sell. “Technically, a tree has a viable quantity of heartwood at 15 years, but the mature quality that can fetch the best price takes time to form,” he says, and adds that harvest should take place only after 25-30 years.

G Venkatappa, a farmer in Kelchennahlli village in Kolar district, Karnataka, started a 0.8 ha sandalwood plantation 18 months ago. He says other farmers in his village are impressed with the prospective benefits, but no one has followed suit because of the long waiting period.

Another concern is security. “Protecting a sandalwood plantation is a tough task for a farmer. It attracts theft once the trees are ready for harvest. If the government provides help in the form of police protection, cameras and so on, more farmers might be willing to take up cultivation,” says M Gopal, chairperson, All-India Kisan Council.

Farmers cultivating sandalwood need to invest heavily in protection equipment. Dinesh has developed a natural fence of thorny acacia trees, installed a solar fence and even carried out trenching all around his farm. He is also planning to install CCTV cameras once his trees become mature. “It is an expensive prospect, but I hope the returns will make up for the cost,” he says.

Ramakantha believes policy provisions supporting sandalwood-cultivating farmers will encourage more production. “Only government and its agencies should be allowed to procure sandalwood from farmers. This provision will prevent them from being cheated or bullied by unscrupulous traders. The government can enter into purchase contracts with farmers and provide security, since the trees would then be government property,” he adds.

Today, the market for sandalwood in India looks favourable. Farmers, too, have the technical know-how to start their own cultivation. But the country still has a long way to go to regain its position as the world leader in sandalwood production.