Traditional medicine system has time and again proved its worth. Then why the cold shoulder? 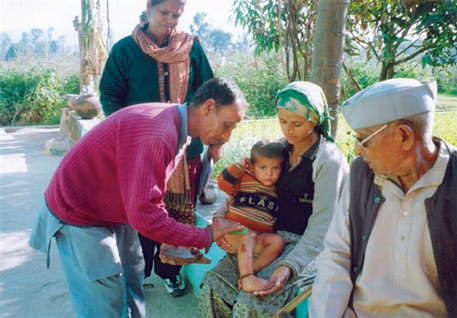 Passing through a dusty trail leading out of Sumari, a village in Uttarakhand, I followed my sister to gather cattle. I must have been six then. Suddenly, I saw a herd of horses coming from the opposite direction. Leaving the trail was not possible—on the right was a steep slope and on the left a stone wall. I tried sticking to the wall. As the horses came close, I lost balance and fell. The first horse in the row suddenly stopped and started sniffing me. This broke the momentum of the other horses and they started pushing each other. The sniffer had no choice but to move. The herd jumped over my body, trying not to hurt me, but a horse stepped on my left hand.

It has been 37 years since the incident. I do not remember whether a joint got dislocated or broken, but I remember my mother taking me to a vaidya (traditional healer) who applied an herbal paste to the injury and covered it with cloth. It pained for a few days but soon the injury healed. The vaidya had cured me without charging any fee.

Another incident which instilled my trust in the traditional medicine happened in 2010. Two years after settling in Bhopal, I was afflicted with dengue fever. My platelet count was down to 143,000. Luckily, I remembered a vaidya’s advice that juice of papaya leaf can treat dengue. After 24 hours and three bowls of the juice, my platelets increased to 151,000.

Traditional healing systems are not restricted to India. As per WHO, 80 per cent of the people in developing countries and 70 per cent in developed countries use some form of alternative medicine.

Impressed by the science, I decided to learn more about the alternative healthcare system. Traditionally, every practitioner has to take an oath before his mentor to cure a patient in all circumstances. He or she does not charge any fee for providing services. The healers pass on their knowledge only to genuine pupils. Such rules were made in the interest of society so that the poor are not deprived of health services.

But after interviewing 60 vaidyas in Uttarakhand, I realised that the tradition is in danger of fading away. Of the 60 vaidyas, only nine were in the age group of 16-25 years and the number of disciples were declining.

Another reason for the fall of traditional healing systems is the decline in the wild population of medicinal plants, such as katuki (Picrorhiza kurroa), haida (Terminalia chebula) and baida (Terminalia bellerica). As a child, my parents used to give me a decoction of chirayita (Swertia chirayita) to cure fever. Some years ago, I realised that the chirayita I was administered was actually a substitute—Swertia angustifolia. Swertia chirayita is difficult to find in the wild. In the absence of the required plant species, vaidyas switch to substitutes, which are ineffective in many cases. According to the National Medicinal Plants Board (NMPB) and the Foundation for Revitalisation of Local Health Traditions at Bengaluru, India harbours over 6,500 species of medicinal plants; many are waiting to be discovered. From the known medicinal plants, 960 are sources for 1,289 botanical raw drugs.

To preserve the tradition, vaidyas have started purchasing medicinal plants from the market. However, in most cases the herb is not of good quality due to faulty harvesting and storage techniques. Earlier, the vaidyas would collect the required plants at a particular time.

The only way to revive the traditional healthcare system is increasing farming of the medicinal plants. Over the years, NMPB has spent a sizeable amount of money on promoting farming of such plants across the country. However, it remains unclear whether such farming has helped in mitigating the pressure of overexploitation. Besides, there is a need to organise vaidyas and acknowledge the traditional medical system that has prudently served society for centuries.