Free as a bird?

Thriving illegal trade in wild birds benefits city-based traders, while the traditional trappers are blamed and struggle to survive

Free as a bird? 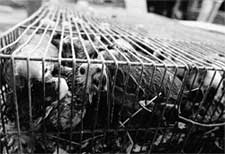 despite the ban on trapping and trade of wild birds in India, illegal traffic flourishes almost all over India, especially in northern India, according to the latest survey by the World Wide Fund for Nature (wwf) and traffic -India. The report, based on 64 surveys in 57 trading establishments/trapping areas in 36 cities reveals that illegal trade of at least 250 birds, including 70 exotic species, continues in northern India. Smuggling of munia and parakeet account for 80 per cent of this trade. The birds are mostly routed clandestinely through Nepal and Pakistan.

According to Abrar Ahmed, who has prepared the report, globally threatened species endemic to the Indian subcontinent like the Swamp francolin (Francolinus gularis), Green munia (Estrilda formosa) and Finn's baya (Ploceus megarhynchus) are being freely traded in Indian markets. These birds are in the Red Data list of the International Union for Conservation of Nature and Natural Resources (iucn). Surprisingly, these species have not been given adequate protection under the Wildlife (Protection) Act, 1972, which lists them under Schedule iv . This has allowed trapping and hunting of birds under the wild animal trapping licence with the permission of a chief wildlife warden.

According to the report, 12,457 birds were seized in 1990, the year all trade in birds was banned. In contrast, only 2,853 birds were recovered in 1989 and only 1,847 birds were seized in 1991. Explaining the increase of number of seizures in 1990, Ahmed told Down To Earth that the traders were probably aware of the impending ban and decided to take advantage of the legal channels to pass off banned birds. But seizures have again risen in 1995, and 8,691 birds were recovered from Delhi alone.

The Indian Wildlife (Protection) Act (wpa), 1972, banned hunting and trade of all Indian wild animals, excluding 'vermin'. In 1990, export of live birds from India was banned and in 1991, local trade in birds was also banned. This did not include the common crow, listed as 'vermin', domesticated birds like the Red junglefowl (Gallus domesticus), and swifts and swallows -- a fact that collectors have taken advantage of. The wpa also does not include birds like the Java sparrow, the lovebird, cockatiel, Zebra finch and the budgerigar, which are the most widely traded exotic captive-bred species.

According to Ahmed, the law has badly hit traditional bird trappers like the Baheliyas, Chirimars and Pathamies, while the people most to blame (and who benefit the most) -- the city-based traders -- have been operating with impunity. About 30,000 people directly or indirectly involved in the trade suffer under the law. Asked how the law can be improved, Ahmed said that that was the job of the concerned ministry. "No government policy has ever tried to solve the problems of the Bahelias and other bird trappers", he said.

Says Asad R Rahmani, director of the Bombay Natural History Society, Mumbai: "Bird trappers are a much despised lot, scorned by conservationists and animal rights activists, and hounded by the law." Supporting the view that the government should protect the livelihood of traditional bird trappers, Ahmed said that they have a vast knowledge of bird habits and behaviour that even experts in ethology lack. "We should use the talent which these traditional people possess and employ them in places like zoos or sanctuaries," he added.

To stop illegal trade, Ahmed suggests that captive breeding of popular exotic species should be encouraged. Large-scale captive breeding will reduce prices and bring down the demand for wild Indian birds. A pair of wild Red munias is available for as little as Rs 10 to Rs 20, while a captive-bred pair ofan exotic species may be priced around Rs 100.

The report also dwells on the regular smuggling routes through Nepal and Pakistan, which highlights the international demand for wild birds. People mostly keep birds as pets; they are also bought by science institutions for investigation. The demand for exotic species for use in Southeast Asian traditional medicine has allowed secretive trade of Indian birds.