Who wants to buy a scooter that's priced as high as a limousine? The auto industry can choose to make costly changes to the conventional technology to make it clean. And tinkering with engines has a price. A cheaper option may lie in leapfrogging to alternative fuels. But this will require automakers to take a quantum leap in mindsets as well 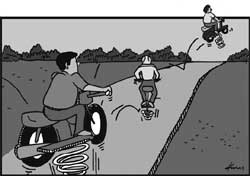 THE crisis is staring us in the face. Two-wheelers will drive the fate of Asia's clean air challenge. The question now is in what direction will technology move in ? One option is to continue improving the conventional two and three-wheeler engines to ensure they meet the emission standards today and tomorrow. The challenge is to find a breakthrough, which is environment-friendly, meets the future emission norms, meets them easily and yet is competitively priced. Some existing technologies vie for this slot. But many experts see them as just incremental gains. They smell like the design of a myopic industry. The answer, they say, lies in looking beyond the dinosaur.

Manufacturers of two-stroke believe one technology that can salvage their product is the fuel injection systems which will replace the 'carburettor'. But this system is prohibitively costly today. It can achieve the desired results but the price to be paid is too high. The two-wheelers have always been the cheap source of conveyance for Asia. If their prices sky rocket the average Asian will be divested of this comfort.

The fuel injection system is able to deal with the inherent problem of the standard carburettor-based two-stroke engine. Direct fuel injection in a two-stroke engine promises to reduce the deadly particulate matter as it is expected to eliminate both the partially burnt or un-burned fuel and oil from the exhaust. Application of this technology could even increase the life of the catalytic converters to meet even tighter standards.

Both China and Taiwan are researching fuel injection systems. Taiwan's Industrial Technology Research Institute has developed what it calls 'an engine management system', which will be applied to four-stroke engines in 2004. The attempt made by Bajaj Auto Ltd in 1990s to use fuel-injection system is a perfect example of why it is impractical to use this technology immedaitely in India. Bajaj had teemed up with Australia-based Orbital Engine Corporation Limited to try its fuel injection system called Orbital Combustion Process (OCP) in small scooters. Prototypes were supplied to Bajaj. Orbital also carried out tests with other two-wheeler companies in India. The test results were quite promising. In fact, when used in a prototype scooter without catalytic converter, emissions were found to be far less than that proposed for 2009. But none of the initiatives led to a marketable product because the deal became too expensive to carry through. Ken Johnsen, executive director of Orbital Engine Corporation, says, "In India meeting keeping the costs down was a must." Evidently, the current fuel injection systems are nowhere near being the perfect replacement for the earlier systems.


The way ahead then lies in travelling elsewhere than down the beaten track. Alternate fuels are one simple yet easy direction to move towards. This is what the automakers must vie for - to get their scooters, motorcycles to run on cleaner gaseous fuels. Riding piggyback on alternate fuels, like compressed natural gas (CNG) can help greatly reduce pollution. At least in critically polluted areas alternate fuels can help overcome the hurdles that the conventional fuel technology poses. Alternate fuels have a better chance of working in the short run where the conventional route looks uncertain.

The CNG conversion programme for three-wheelers underway in Delhi under Supreme Court's directives is proof of alternative fuels' success in taming the yet unbridled dirty dragons. N V Iyer asserts, the CNG autos have achieved emissions levels far better than what the industry has proposed for 2009 (see graph: Clear winner). Carbon monoxide levels are more than 80 per cent lower and hydrocarbons and nitrogen oxides nearly 58 per cent lower than the SIAM's proposed limits for 2009.

Says Iyer, "CNG vehicle emissions meet the 2009 emission norms suggested by SIAM. The carbon monoxide emissions from the CNG three-wheelers are low as CNG is a clean burning fuel. It is the use of a cleaner fuel which has lowered emissions."

If it can happen in Delhi, it is possible in Pakistan and it is possible in Dhaka. The CNG autos in Delhi prove that using diverse vehicular fuels makes sense, both, economically and environmentally, for Asian countries that have their reserves of gas. The manufacturers, under pressure to show better emission results, stand to gain just as much as a customer looking to get their money's worth. Two alternative fuels that have taken off in Asia are CNG and liquefied petroleum gas (LPG). Three-wheelers in Bangkok, Tuk Tuk, have been running on LPG for 20 years. Conversion of two and three-wheelers to CNG has already begun in Bangladesh, India, and Pakistan. Bajaj is developing an LPG three-wheeler, LPG two-wheelers and TVS Motor Compnay is ready with its bi-fuel LPG scooter. It's the complacency of an inert government that denies these models to compete with their dirtier cousins - the petrol-based two and four stroke engines. In the absence of an official road map for alternative fuel technology, the efforts are unable to translate into market successes. The potential in Asian countries such as Bangladesh is huge. But the opportunity is far from being utilised. "Progress has been extremely tardy largely because of lack of investment, inadequate infrastructure and absence of sound regulatory mechanism," says Michael P Walsh.
While alternate fossil fuels may reduce emissions and bring them to minimal, ultimately a leapfrog to zero emission technology will be the key. Only zero emission vehicles can neutralise the effect of uncontrolled growth of two and three-wheeled vehicles. Powering two and three-wheelers with fuel cells may be considered science fiction in Asia but they can certainly be tomorrow's benign horses replacing the existing deadly fleets. In fact even while research on fuel cells continues, electric vehicles can be immediately adopted and some efforts are being made in this direction.

Making strides in this direction is again Taiwan. It has ordained that at least two per cent of sales from 2001 onwards be of electric scooters. Taiwan already boasts of 20,000 electric scooters on road - the largest such fleet in the world. They are still working aggressively to improve engine performance, reduce weight, increase cruise range and energy efficiency and aim at longer battery life. Battery technology is now the subject of intensive research and development aimed at increasing energy and power density, efficiency, increasing useful life, reducing manufacturing costs and finding substitute for environmentally-unfriendly material such as lead and cadmium.

Countries like Nepal are also making small forays. The Safa tempo programme of electric three wheelers in Kathmandu, is widely recognised and supported by public. In India, Bajaj has developed electric two-wheelers as well as three-wheelers. Mahindra and Mahindra and Scooters India Limited have begun marketing electric three-wheelers. However, as yet, their market penetration remains limited to cities like Delhi and Lucknow.

But these minimal efforts have to lead to a greater change in the mindset. The mindset of the government, which needs to give additional incentives for research in the region as well as fiscal incentives to use zero emission technology. If ways are not found to cushion the cost of the change over to cleaner and better technologies like electrically-powered vehicles the industry will find it hard to break the impasse. "The fiscal support to help opt for hybrids and zero emission technology is missing," says Venu Srinivasan, managing director of the TVS Motor Company, one of India's leading manufacturers, which is making a foray into hybrid scooters.

Uncertainty raises its ugly head when manufacturers take the valiant step to try out experimental technology but have to retreat before costs drown them in the market. Just like Bajaj Auto Ltd did having developed a prototype of its legendary Chetak and Super models with the Orbital fuel injection system. A price leap of more than Rs 5,000 in the retail prices in mid-1990s was commercially unacceptable. The balance gets tilted against alternative technologies with unfavourable taxation, as in the case of battery-operated three-wheelers in India - imposed taxes constitute more than 66 per cent of the total cost of the vehicle.

But the onus does not entirely lie with a lax government. Industry too has failed to show any interest in pushing the government to design fiscal instruments linked to emissions reduction, which could favour application of advanced technology. Unless this laxity is overcome, the leap one wishes Asia to take will remain a technological limp.