Friends of the river

Clearing the Ganga, is their mission even if it means fishing out scores of bodies from the river

Friends of the river 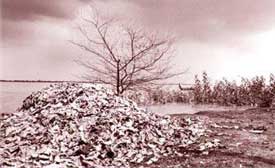 KANPUR, the legendary Cawnpore of the British Raj, has been re-christened time and again in it's 300 years of existence. Better known as the "Industrial Graveyard" and the "Capital of Tuberculosis" in recent years, the World Health Organisation has added another feather in its cap by declaring it one of the 10 most polluted cities in the world. The authorities and the three million-strong public remain unfazed. The notable exception is Rakesh Jaiswal, the founder of Eco Friends, and the increasing ranks of his followers who are pressing for direct action from the authorities to tackle Kanpur's environmental problems.
The history of Kanpur's fall from grace lies in its wayward growth as an industrial town. Unfortunately, religious practices have compounded the problem. The Ganga flows through Kanpur. Venerated for 2,000 years as the holy mother of all rivers, its waters are highly polluted today and a dip in the Ganga could result in a host of near-fatal illnesses. Human and animal carcasses can be seen floating in the waters. About 350 million litres of untreated sewage find their way into the river daily. There is hardly any marine flora and fauna left. And the survival of the Gangetic dolphin is threatened.

There is a reason why human bodies are found floating in the river. Water burial is practiced by a few communities. Also, for the poor, it is an easy way out as they lack money for a proper cremation. But it is amazing that Rama Shankar Pal, a minister in the state cabinet, followed this practice when his mother died, says Jaiswal. Unclaimed bodies lying in police stations and hospitals are also thrown into the Ganga, says Jaiswal. Besides, there are 300-odd tanneries that keep discharging effluents, including carcinogenic chromium, into the river. And people living along the river banks continue to use the river water for various purposes, including drinking. Intestinal and skin ailments are rampant.

"One day, I opened the tap for drinking water and all I got was black foul-smelling liquid," says Jaiswal. Investigations revealed that the raw water intake point for Kanpur at Bhairav Ghat received untreated sewage through five drains, including one from a tuberculosis hospital.
This was the last straw. Jaiswal decided to do something about it. He floated Eco Friends and started spreading awareness among the youth and mobilising a student force. The response he got was over- whelming. People from A walks of life joined the campaigns. Rallies, workshops and yatras were organised to keep up the pace. The "Save Ganga Cycle Rally" on March 25, 1995, was led by noted environmentalist Sunderlal Bahuguna. In the 1995 Ardha Kumbh Mela in Allahabad, Eco Friends tried to explain the problem to religious leaders and devotees. Some religious leaders did talk to the devotees. But the response of some was quite the opposite. "Keep throwing bodies or waste, the Ganga will purify it they told us," recalls Jaiswal.

In June 1997, Jaiswal took the help of his friends and the Dom community (whose members handle the work at the cremation grounds), to retrieve 180 bodies which were later given a proper burial. "Our efforts did have some impact on the masses, but failed to evoke any government interest," says Jaiswal.

Soon thereafter, he decided to extend his campaign to tackle other problems ailing the city. "The issues demanded immediate attention and the authorities lacked the spirit and determination to bring about the necessary change," says Jaiswal. In July, 1997, Jaiswal filed a writ petition in the Allahabad high court. This Public Interest Litigation (PIL) was not only confined to Kanpur, but to issues ailing in the entire state.

In May 1998, the court ordered the closure of industries without primary effluent treatment plants (PETPS) - 117 tanneries in Kanpur; 40 saree printing units in Varanasi; and 10 carpet dyeing units in Mirzapur. Among other things, it ordered the formation of the River Police in 22 towns and provision of uninterrupted power supply to all the ETPS that were created under the Ganga Action Plan (GAP)-Phase 1.

The court also asked the up Pollution Control Board to monitor the river quality every month from the users' point and not from the centre of the river. A high-level committee was formed to monitor the compliance of the various court orders. The committee submitted its first report on July 9, 1998.


For Jaiswal, his five-year struggle is finally bearing fruit. "The court orders have been of immense help," he says. Earlier, one could spot a minimum of 100 bodies in the five to six kilometre stretch of Ganga in Kanpur, now the number has gone down to around 10. The polluting industries have been closed. Five drains that used to reach the raw water intake point have been diverted and there is a reduction in the effluents discharged. According to D B S Gupta, general manager, Kanpur'Jal Nigam, 70 per cent of the pollution load has come down.

"But the success and sustainability of the GAP-1 projects are very much questionable," says Jaiswal. "Some of the projects were non-starters - for instance, setting up three electric crematoriums, two are non-functional and the other has no acceptability because of the high cost." Power cuts have also rendered the PETP plants useless.

"Pollution in Kanpur has reduced and we aim to wipe it off completely," he says. "Creating big institutions does not matter much. What matters is if you can make yourself an institution", says Simronjeet Singh, a researcher in human ecology who works with Jaiswal. And Jaiswal is doing just that.