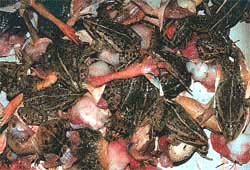 hop , skip and jump into extinction. That's what members of the amphibian family -- toads, frogs, salamanders and newts -- are doing. After dinosaurs, a serious problem of extinction now threatens the amphibian population. From the windswept Rocky mountains of the us to the pristine rainforests of South America; from the cold Andean ranges to the tropical forests of Australia and even temperate Europe, the frog population has been on the decline. And even those who do not look beyond their "bulging eyes, and warts" may have to listen to what the frogs are dying to say.

Reports suggest that, in Costa Rica, 20 frog and toad species -- almost half the total -- have disappeared over the past five years. In Australia, a frog species that has the potential to cure cancer is affected by a serious skin disease. In the us , one-third of the 230 native amphibian species are on the decline. No continent has been spared. The bad news is yet to come from Asia and Africa only because of the relatively low intensity of research in these two continents. For most of the 250-odd described species of amphibians in south Asia, the biological status is simply unknown.

However, the good news is that not all species are affected. The population of a species threatened in one locality may be thriving elsewhere. The degree of population decline of amphibians also appears to vary from region to region and within different species.

Considered "sentinel" species, their permeable skin and ability to live both on land and in water makes amphibians more sensitive to environmental changes than any other species. As tadpoles, they live on water and eat plants, while in the adult stage they live on land and eat insects. Their eggs have no protective shells. Their skin is thin, moist and permeable. Scientists believe that they are useful indicators of environment quality and the changes that are taking place in the natural world. Thus, the decline in amphibian population could be a precursor for what is going to befall humans, too.

Moreover, members of the amphibian family are an important part of the food chain. "They form an essential part of the diet of many animals, such as snakes and birds, which, in turn, form the diet of other animals," says Michael Tyler, a researcher at the University of Adelaide, Australia.
Scientists have zeroed in on three reasons that may be responsible for the amphibians dying -- infectious diseases, chemical pollution and increased ultraviolet ( uv ) radiation (resulting from the thinning of the ozone layer in the upper atmosphere). Besides these three reasons, some scientists also blame trade in endangered amphibians, acidification of the Earth's atmosphere and deforestation for the decline.
It is well-known that bacteria and viruses infect amphibians. But what has startled researchers is that a fungus is killing frogs. When microbiologists analysed some dead frogs, collected from Panama in the us and Queensland in Australia, they found that a new strain of fungus was responsible in both instances. The fungus covers the frog's skin, through which respiration takes place, then suffocates them to death.
In temperate regions, such as north America and Europe, uv radiation from the Sun has been reaching the Earth's surface during the spring spawning season. This is because of the destruction of the protective ozone layer in the atmosphere due to the use of chlorofloro carbons ( cfc s) and other human-made chemicals. Researchers at Oregon State University, usa , feel that uv radiation is affecting the eggs that amphibians lay in the shallow waters of lakes and ponds.

In an experiment, the researchers shielded some salamander eggs against uv rays and exposed other eggs to normal sunlight. They found that the former hatched successfully, while the latter failed to hatch or produced deformed salamanders.
Many researchers believe that increasing use of pesticides and fungicides may be responsible for frog deaths. Spraying of pesticides not only poisons frogs directly, it also wipes out their food supply. Amphibians are known to be susceptible to at least 211 different pollutants. Organophosphorus insecticides, like malathion, are known to disturb the frog's development, distorting the growth of their limbs at the egg and tadpole stages. Frog deformities -- such as multiple or missing limbs and body abnormalities -- because of unchecked use of chemicals have already been reported in many areas in the us.

Donella H Meadows, professor of environmental studies at the uk -based Dartmouth College says that a Canadian researcher reported that along the St Lawrence valley fewer than two per cent of frogs in ponds that were away from any pesticide use had deformities. While 20 per cent frogs from ponds near areas of heavy pesticide use displayed defects, in one pond it was 100 per cent. Researchers in Switzerland have exposed developing frog eggs to the pesticide triphenyltin and have found deformities similar to some seen in the ponds.

Researchers at the us -based Scripps Research Institute say that s -methoprene, a popular ingredient in mosquito sprays and flea powders, breaks down into retinoids, which are known to cause birth defects not only in frogs but among humans. As this spray kills insects and interrupts their pupation it is bound to affect the development of embryos.

Australia has banned the use of the weedkiller Roundup (gylphosate) around ponds and streams because of its effect on tadpoles and frogs. The problem does not seem to be the gylphosate itself, but an "inert ingredient" added to make the herbicide stick better to leaves.
Uncontrolled international trade in amphibians is also threatening several species. The Convention on International Trade in Endangered Species of Wild Fauna and Flora ( cites ) or the Washington Convention, the main tool to control trade in wild species internationally, has already banned trade in two amphibian species -- Hoplobatrachus tigerinus and Euphlyctis hexadactylus . This ban may help save the two species, but may drive many other species to the brink of extinction.
Another anthropogenic disturbance that is suspected to have a negative effect on amphibian populations is acidification. Widely reported in the industrialised nations, this is happening because of increasing sulphur dioxide ( so 2 ) and nitrogen dioxide ( no 2 ) emissions. so 2 (in the presence of sunlight) and no 2 reacts with water vapour to form sulphuric and nitric acids. The rain, contaminated with these acids, affects flora and fauna, both on land and water, adversely.

"All amphibian biologists are now convinced that something catastrophic is happening to amphibians," says Ronald Heyer, chairperson of the declining amphibian populations task force, an international network of more than 1,000 scientists. "In the us alone, around us $8 million is needed to monitor and research amphibians," says Bruce Babbitt, interior secretary, usa . "Since the scope of the problem is global, other countries need to fund similar research and conservation efforts," says Heyer.

In the uk , attempts are being made to save the last-known surviving male pool frog. The frog is being encouraged to breed with nine female frogs flown in from Sweden. The Swedish frogs have been chosen because of their close genetic makeup to the British variety.
Frogs are important particularly for a country such as India, where the agricultural sector plays a vital role in the economy. They devour pests which pose a threat to crops and prevent the spread of vector-borne diseases like malaria because they consume parasites responsible for the disease.

An adult frog devours its own weight of insects daily. Thus, if its population goes down, the insect population goes up. The extinction of frogs, on the one hand, means increasing the use of pesticides which is not only bad for agriculture in the long run, but poses a serious health hazard to all living organisms. On the other hand, the decline in amphibian population also means spread of diseases like malaria.

According to experts at the Bombay Natural History Society, in many parts of western Maharashtra, crops have been badly hit by proliferating insects as a result of large-scale slaughter of frogs. The Zoological Survey of India has also reported an increase in malaria in rural areas of West Bengal where 50 per cent of the frogs destined for export are captured. In India, trapping for export of frog legs poses a major threat (see box: With love, from India ).

However, not much is known about the commonest species of amphibians found in India. So far, 210 amphibian species are said to exist in India, making it one of the world's leading frog habitat. Most of these are said to be thriving in the Western Ghats, Andaman and Nicobar Islands, the foothills of the Himalaya and the northeast. Worldwide, there are 53 species of amphibians listed in the endangered category, of which three are in India.

It is predicted that the number of amphibian species found in India will increase many fold if systematic studies are carried out. For instance, in Sri Lanka, Kelum Manamandra-Arachchi and Rohan Pethiyagoda of the Sri Lanka Wildlife Heritage Trust demonstrated -- using both traditional morphological and acoustic data and molecular techniques -- that the fauna includes over 250 species, a far cry from the 55 species listed till then.

In the Indian context, over-extraction of groundwater for human use, which can dry up or decrease levels of water in ponds during summer and destruction of forests has led to either complete loss of forests or their fragmentation. This could isolate amphibian populations, and relegate them in smaller sub-populations that may no longer be genetically viable. Besides, certain forestry practices such as removal of leaf litter may also be working against biodiversity conservation.

So what impedes the acquisition of this information in India? What is rarer than amphibian species are people who can identify them. The science, called systematic, which deals with relationships between and within species, is not taught in India, and nearly all systematicists are self-taught. This explains why data on amphibians is still very sparse. Even the most comprehensive collections of India, such as those of the Zoological Survey of India and the Bombay Natural History Museum, do not have close to half of India's described amphibian species.

Several frog and toad species are known only from the original description, and no effort has been made to find these species since. It is possible that some of these species are common and widespread, but status information is generally unavailable. Data collection has been for the most part not with the view of providing quantitative information -- rather, they are subjective evaluations of abundance. Today, one can only assume that amphibians native to India may also be facing what its brethrens elsewhere are going through.

In ancient times, frogs were believed to be harbingers of prosperity and plentiful rains. This belief will get eroded along with their disappearance. And the extermination of frogs could well spell doom for the entire human society.