Ethanol is a clean and cheap fuel blend. But the Indian government is impeding the use of ethanol when it is callously promoting cancer-causing MTBE 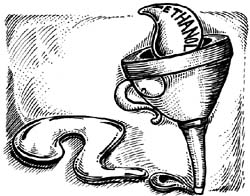 The petroleum industry in India has always resisted the use of ethanol as a blending stock in fuel, favouring methyl tertiary butyl ether ( mtbe), a known carcinogen. This time around the representatives of ethanol industry got together at the seminar 'Use of ethanol in motor gasoline: In search of a viable strategy' to counter the petroleum industry. The seminar was organised by the Federation of Indian Chambers of Commerce and Industry on October 18, 2000. They said that ethanol use must be encouraged if vehicular emissions are to come down. They tried to persuade the government to opt for ethanol.

Ethanol can be indigenously produced from molasses -- a byproduct of the sugar industry, or other agricultural wastes found in abundance in India.

The effort was to win over the two key ministers Shanta Kumar, Union minister for food and civil supplies and Ram Naik, Union minister for petroleum and natural gas. Others present included representatives of oil refineries and non-government organisations ( ngo ), such as the Delhi-based Centre for Science and Environment.

While Shanta Kumar concurred with the distillers that there is a gain in promoting the agro-based fuel, Ram Naik announced a six-month pilot project to test the effectiveness of a five per cent ethanol blend in petrol. This is to be done in the districts of Sangli, Satara and Kolhapur in Maharashtra, where 187 petrol pumps will be supplied the ethanol-blended fuel from December 2000.

Instead of focussing on immediate commercial application of ethanol, the petroleum minister talked about yet another test project. Many feasibility assessments have been made and successful experiments conducted in the past. Most experts felt that requisite tests have already been conducted and the government should start commercial use of ethanol immediately. "The ethanol industry has been negotiating with the ministry of petroleum and natural gas to adopt ethanol as a clean fuel option for many years now," says H B Mathur, professor emeritus at the Delhi College of Engineering. Ram V Tyagarajan, chairperson and managing director of Thiru Arooran Sugar, told Down To Earth, "Due to the efforts of the All India Distillers' Association ( aida), a committee was set up by the government to explore the possibility of ethanol blending in petrol as far back as 1996. The committee had submitted its report, recommending the use of ethanol but the government failed to move on the issue. Scientists such as H B Mathur and T R Jagadeesan of College of Engineering, Anna University, Chennai, had conducted successful experiments with ethanol as fuel in the 1970s and 1980s. In February 2000, a seminar along the same lines was organised by Winrock International India. 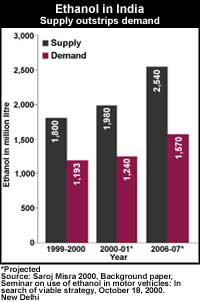 Though success stories of ethanol have emerged from countries like Brazil and usa, the I ndian government is still floundering and not ready to take the big leap forward. "Brazil produces 13.5 billion litres of ethanol and saves us $38-40 billion in foreign currency each year and helps employ one million workers. Brazil also taxes gasoline very highly to promote the use of ethanol, collecting us $2.5 billion in taxes each year," says Luiz Carlos Correa, the Brazilian representative in the Ethanol International Alliance. By 1991, 90 per cent of all cars sold in Brazil were alcohol-based. At present, 60 per cent of the cars in Brazil use ethanol and 30 per cent run on methanol while the rest on gasoline. Brazil is now blending ethanol even with diesel.

us-based Louis Berger group's S N Rao says usa already has an experience of one trillion kilometres with ethanol. Over 90 per cent of the ethanol produced in the us is made from corn -- a starch-based feedstock that is easily fermented to make ethanol. A small fraction of ethanol is made from wheat and an even smaller fraction is made from molasses, says Saroj Misra of Winrock International India. In 1998, more than six billion litres of ethanol was produced in the us . The demand for ethanol, he claims, is 5.8 billion litres, but it is likely to go up to as much as 12 billion litres by 2004.


Contrast the wealth of data in favour of using ethanol with the vacillating stand of the government in India. The seminar revealed that it is the petroleum refinery sector which is acting as the stumbling block.

Ethanol is, ecofriendly, cheap and available. But, the opposition from the petroleum refineries has made the government go slow on the issue. The Supreme Court had ordered that benzene content should be restricted in the National Capital Territory of Delhi to one per cent in petrol from October 2000. Therefore, the refineries are taking recourse to adding other oxygenates to prevent knocking in the engines and ensure cleaner burning of fuel. They have chosen to add the extremely harmful ether-based oxygenate, mtbe, as a petrol blend. mtbe is a known carcinogen and is to be phased out in California, usa, by the year 2002. A decision to ban mtbe has also been taken by the us Environmental Protection Agency (usepa ). The chairperson of the Senate Environment and Public Works Committee, senator Bob Smith told the senate, " mtbe has done more damage to our drinking water than we really would care to know. This is a serious environmental problem that must be addressed." Ethanol has gained popularity as an oxygenate after the us government decided to phase out mtbe . John M Urbachuk, in a report prepared for the Governor's Ethanol Coalition, on the ability of the us industry to replace mtbe , states that the ethanol demand in the us for 2000 is projected at five billion litres.

H B Mathur says, "Since capacities have already been created in Indian refineries to produce ether-based oxygenates, pressure is building up to protect the investments." Refineries such as Bharat Petroleum Corporation Limited and Reliance have set up mtbe plants. According to sources in the petroleum industry, the total existing production capacity is 30,000 litres of mtbe per year. Therefore, even the government is acting in defense of the mtbe strategy of the refineries.

A K Bhatnagar, Director (research and development) Indian Oil Corporation ( r&d ) says, "When Indian refineries set up mtbe plants, mtbe was the last word on oxygenates, even in the us . Only in last two years information has started coming out on how it contaminates ground water. If we are asked to ban mtbe we may have to do it. But even ethanol is not safe and can lead to harmful emissions." At the seminar, the Centre for Science and Environment made a plea to ban harmful oxygenates such as mtbe immediately and introduce relatively safer oxygenates like ethanol. But Ram Naik remained silent about the continuing use of mtbe.

The oil industry gives its own excuses for not using ethanol. One, according to R K Malhotra, deputy general manager, Indian Oil Corporation Limited, is that it is too costly to blend. The distillers -- bulk suppliers of ethanol -- had quoted a price of about Rs 18.58 per litre in 1999, which was unacceptable to the oil industry. But N K Lamba, vice president of Daurala Sugar Works informs that the price has now been lowered to Rs 15.52 per litre. He further says that, "The rate offered is below our cost price. The distillers are actually absorbing a part of the cost of production which comes to Rs 16.35 per litre. The recent petrol price hike has made blending of ethanol more competitive." But Naik is sceptical. He agrees that that the recent price hike of crude oil to us $31 per barrel makes ethanol blending economical. But, he warns that if the prices slip again close to earlier levels of us $10 per barrel then it may not be viable anymore.

A closer look reveals the economic advantage of using ethanol, rather than mtbe, as a blending stock. mtbe , priced at around Rs 14.80 per litre, is cheaper than ethanol. But the amount of mtbe required to attain the specified level of oxygenation is 14.8 per cent by volume of petrol as compared to 7.8 per cent required of ethanol . For 100 litres of petrol, therefore, the ethanol required is worth Rs 121.06 and mtbe required is worth Rs 219.04. The advantage of using ethanol is evident.

The petroleum industry also opposes ethanol on the ground that it is not possible to ensure a stable supply as sugarcane is a seasonal crop. But figures quoted by Saroj Misra, show otherwise. The demand for ethanol in Delhi, Calcutta, Mumbai and Bangalore, for a 10 per cent blend in petrol, is 135 million litres for the year 2000-2001. The installed capacity for production of ethanol in the 1999-2000 had reached higher than 1,800 million litres. "The surplus supply of ethanol is projected at 970 million litres by 2006-2007," says Misra. (see graph: Ethanol in India ). Ram V Tyagarajan, chairperson and managing director of Thiru Arooran Sugar Mills assures: "We can immediately support a five per cent blend of ethanol."

The chemical industry is also against the use of ethanol. They claim the country can gain more from the sale of products they make from ethanol or from exporting ethanol as a fuel blend than from using it in India as a blend. They fear that other uses of ethanol may create a competing demand, jeopardising their trade by raising costs of production.

There is some controversy over how it should be blended with petrol as well. Misra says, "If ethanol is blended as an oxygenate then the ethanol distribution channel will completely bypass the refineries. Distributing agencies of Indian Oil Corporation will be able to buy ethanol directly from the distillers, blend it in the depots and supply it to the retail outlets." On the other hand, Mathur believes that, "It is imperative to blend ethanol in the refinery." He says that blending is a fairly simple process for which the refineries will not need to bear huge costs.

Anil Agarwal, director of Centre for Science and Environment says, "The government should set up a committee to develop a policy on the use of safer oxygenates to eliminate the use of more harmful oxygenates. Such a committee must include environmentalists to ensure that public health and environmental considerations are kept in mind." He further recommends an environmental impact assessment procedure for all products such as mtbe . A mere site-specific assessment will not be good enough to protect the people from detrimental health and environmental effects of products such as mtbe, he says.